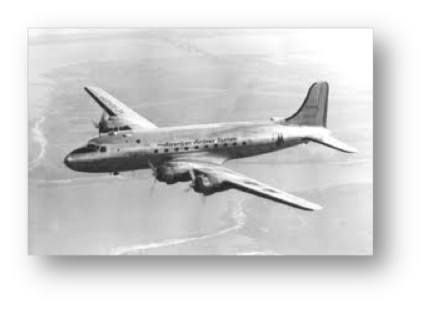 Good afternoon and Happy Holidays—the Holiday Season is in full swing now and it is my hope that your escape to the Third Dimension Blog this Friday will provide a bit of relief from the hustle and bustle. Last week I told you that we would talk about the merger of United and Continental but I am going to move in a different direction. I have several articles that I want you to read, the links are at the end of the blog for this week, and I want to take you back to a few articles that I wrote in 2009. I will give you a lead in for each article and then a brief synopsis at the end—but first let’s talk about the DC-3s big brother first.

The DC-4 was produced by Douglas as a result of a request by United, and others, for a long range passenger airliner. The DC-4 was configured to carry 42 passengers during the day and 30 passengers when sleeping berths were installed. The big brother of the DC-3 was three times heavier, significantly faster, and with four engines the DC-4 would prove itself to be one of the safest airplanes of its time. Douglas first flew the DC-4E in 1938 but when war broke out in 1941 Douglas shifted production, and deliveries, of the DC-4 to the US military. The DC-4, now designated the C-54 by the military, would prove to be a powerful tool in bringing the war in Europe, and the Pacific, to an end.

A little known fact about the C-54 is that President Truman was on board his C-54, named the “Sacred Cow,” when he signed the National Security Act of 1947 creating the US Air Force, General MacArthur used a C-54 as his personal aircraft, as well as Winston Churchill was given a C-54 to use as his personal transport.

Now, a good place to start reading about the big brother of the DC-3 is here, FACTS, and this link will take you to a site that primarily details the military use of the airplane but also reveals some interesting facts about the DC-4E prototype. For a VIDEO, I actually found something on the DC-4E that shows the airplane before, and after, it was delivered to Japan and modified.

Now, let’s talk about a few of the byproducts of Deregulation…..

The article this week may not appear to have a central theme, as I try to tie together my thoughts from articles I wrote in 2009, but hopefully my closing comments will add a cohesive element that will provoke thought and make sense; however, it is going to be difficult. So, consider the following quote as we move forward and let’s see if I can make my point and keep your interest:

“Job Security as an Aviator is a Myth—Even in the Best of Times.”

Deregulation was based on the premise, and expectation, that an unregulated industry would attract new airlines, increase competition, reduce fares and improve service. All current, as well as new, airlines would be allowed to enter and serve any market they wanted and provide service at whatever price they thought reasonable. Again, the goal was to boost competition and expand service. This was certainly good for the consumer, but what about the people of the airlines and their families?

We have talked about the practices that the airlines adopted to stave off the competition, and how the business model created under the CAB would ultimately bring about the demise of the majority of the legacy carriers, but we have not talked about one very unique feature of Airline Deregulation—The Employee Protection Plan.

The Employee Protection Plan (EPP) was devised to provide displaced employees with compensation and to grant them the right to be rehired by another airline before any other potential candidate was considered. However, this program never provided any assistance or compensation to the employees of failed airlines, and so it was ultimately repealed by the Congress. The paradox here is that the airlines themselves were the biggest opponents of this plan. As I have said before, “Job security as an aviator is a myth even in the best of times”, and the struggle continues.

There is very little information available about the actual damage done to airline employees and their families. Most experts only focus on the consumer, and how they have benefited. The general consensus, by these experts, is that because fares have gone done some thirty percent between 1978 and 1990, we have been successful with the grand plan. Experts also say that productivity has increased, but the question remains: Did the consumer pay for that, or did that responsibility fall upon the airline employees and their families?

Another group of experts describes deregulation as an “unfinished revolution.” They speak of the first wave of deregulation as the hub and spoke route system and the success of that concept. The second wave was the successful introduction of the low-fare airlines flying point-to-point service after point-to-point was abandoned by the full service airlines.— What was that about a successful hub and spoke route system?— The third wave of deregulation was the introduction of the regional jet and the cost savings to the legacy carriers and the final wave will be the deregulation of the airports and the ATC system.

While many of these statements may have been backed by statistical data, and a bit of fluff, to support the specifics few experts have taken into consideration how these changes impacted airline employees and their families. What research has been conducted on how their lives have been impacted? The whole truth, the complete story if you will, may never be represented fully, and certainly would not sell well in Washington or with the consumer.

Gone but Not Forgotten

We talked about the price aviation professionals and their families have paid for Airline Deregulation. I believe that they alone bore the cost of the grand plan from Washington and our economy is still paying a price for the regulation, and micromanagement, of the airlines by the CAB. This was not a model for success. So, let’s talk about the Legacy Carriers.

Mergers and failures are difficult to keep up with, but there are some significant changes that took place in the 1980s and the decades after that can provide us with some perspective of the state of the industry. Do you remember which airlines were around in 1978 and which ones are no longer in existence? If the answer is no, here’s a list of who is not around:

These facts are very telling on the success of deregulation, but there are a number of experts who will argue that this is normal for any industry whether it is airlines or typewriters. However, the important thing to note here is that other industries were not regulated by the CAB.

Airline failures and mergers, what I referred to as absorptions above, occurred for some very simple economic reasons. First, and the most important, an airline was absorbed by a competitor in order to grow the dominant airline and increase their route structure. The second reason was to control the minor to major markets to offset, or minimize, losses in the major to major markets where there was stiff competition. The third reason was to better control the pricing of their product.

I am a pilot and not an economist. I have pointed out to you what I believe to be the fallacy of “Airline Deregulation” and I want to share with you a few facts about business cycles from Boeing: 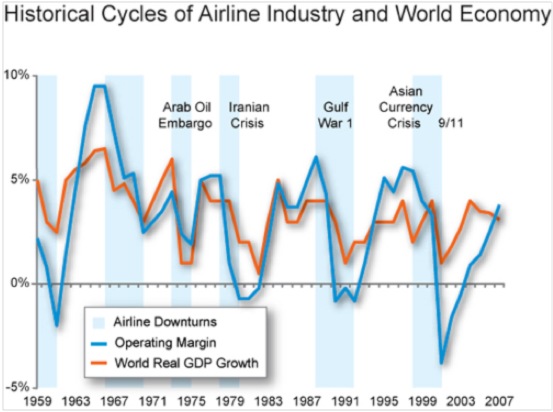 The chart above does not represent the current downturn but the dip will closely rival that of 2000/2001 with the exception that the recovery will be significantly longer and less robust. Now consider what Boeing is saying about projected demand for their product and the products of other airplane manufacturers: 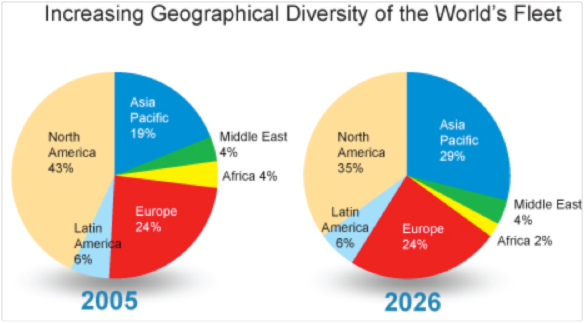 Demand for commercial airplanes is becoming more diverse geographically, as Asia’s share of the aviation market begins to reflect the purchasing power of the region’s economy. The broadening global demand base dampens the effects of regional volatility.

As total demand for commercial airplanes continues to rise over the next 20 years, the expansion of Asia-Pacific’s economies—particularly those of China and India —will increasingly moderate the effects of fluctuations of the North American and European economies. Asia-Pacific’s share of the new airplane market rose to 19% of global demand in 2005. That is nearly even with Europe’s 24% share. By 2026, Asia-Pacific’s share will reach 29%, surpassing that of Europe. During the same period, North America’s share of the demand will decline from 43% to 35%.

Though Asia’s economies are stimulated by the market for Asian goods in North America and Europe, the region’s indigenous consumer markets are developing rapidly. Rising average income and a growing consumer economy will foster demand for air travel and transport within the region. Robust indigenous consumer markets will help sustain the region’s demand for air freighters and passenger airplanes, even in the event of slack exports to Europe or North America.

As China and India move up on the list of top 10 world economies, other economies will appear on the list for the first time. By 2040, China will lead the list and India will move up to third behind the United States. Brazil will pass up Germany, Britain, and France. Mexico and Russia will join the roster behind Japan. These rapid movers are currently under-served by commercial aviation, so growth will far outpace that in the more mature economies.

Distribution of demand among a wider base of relatively independent economies buffers global demand for airplanes against the effects of regional economic shocks or cycles.

While I am not alone, on some of my opinions, I can say for sure that not many people will agree publically that airline employees in the US, and their families, paid for Airline Deregulation; in addition, the depressed wages of the last twenty years were the basis of all airline profits. The European continent has also suffered similarly but I cannot speak with any authority to the extent of the damage.

Who do we blame? What do we do as the demand for airplanes and aviation professionals’ shifts to the Pacific Rim and other areas? How will the merger of the remaining carriers in the US adversely affect employment opportunities for aviation professionals during the expected recovery of 2013 and beyond?

Again, I am not an economist but I am tired of seeing airline employees, and their families, subsidizing the US airline industries bottom line. I am also damn tired of hearing about a shortage of trained professional for the upcoming growth in aviation here in the US.

Your future will not be protected by legislators or airline executives and unions are only a tool in your quest to resolve the problem.

All aviation professionals need to rethink their futures and their willingness to be a silent majority. I have tried to show, using my words and the words of experts, my concern. Did I do it effectively? Complicated subject when you attack the problem from a personal perspective and the need for you to understand the history that brought us here is imperative. Do your homework and don’t let anyone think for you.

Next week I will finish up the year with a short blog and then I will head south to enjoy some time off. I hope you have a good weekend but most of all I hope you begin your search for an answer to the question, “Where is aviation taking me, and my family, in the 21st century and how will I survive the uphill battle?”

Below are a few links to articles that will help you start your search and remember that you have other aviation professionals who will be following in your footsteps—-what do you expect them to learn from your example?

IATA Warns Of Eurozone Impact on the Industry

This link is for fun—Airline Executives Speak Their Minds