Steve the Harrier Pilot – Short Story of the Month 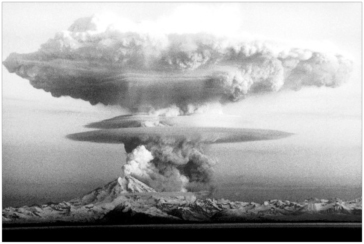 Most of us consider volcanoes to be dangerous for others and never consider the real consequences they have on our lives; however, if you have an active volcano near where you live, or work, then you are keenly aware of the damage they cause locally—-but what should you know, as an Aviator, about the global consequences?

In my preview of this week’s blog I introduced you to the events that the crew of BA-009 was confronted with but there are others who have encountered the same problem. In 1989 a KLM 747 encountered an ash cloud while descending though FL250 towards Anchorage and when the crew added power to climb out of the ash they lost all four engines and half of the instruments failed inside the cockpit. The crew restarted the engines less than a minute before impact and recovered the aircraft for a safe landing. Singapore Airlines had a close call in 1982, just after the incident with BA-009 you read about, and they too managed to recover and land safely.

I know that all who read this are not crewmembers on 747s flying internationally but what if your job as a corporate pilot, or a summer adventure in your Cessna 185 or Piper Arrow, takes you to an area where this threat exists. Are you prepared, do you know where to go for information on flight planning, and are you comfortable dealing with this challenge?

Let’s take a look at the information in the following video and see if I can give you a starting point on your quest for knowledge. This video is about twenty minutes long but is well worth your time…..

Now let’s take a look at the site mentioned in the video, Puff Volcanic Ash Tracking Model, which is provided by the Geophysical Institute at the University of Alaska in Fairbanks. This link will show you every active volcano in the world and by clicking on the icons you will see the name of that volcano and its current state as well as other specifics.

While researching articles on Alaska Airlines I found something that provides an airline’s insight in to the problem of volcanic ash and I want to share with you a portion of that article:

How One Airline Skirts the Ash Clouds

Alaska Airlines’ turning point with volcanic ash came when Mount St. Helens erupted in 1980 not far from Alaska’s home base at Seattle-Tacoma International Airport. The airline, which encounters volcanic ash in Alaska every couple of years as well, was crippled for days by Mount St. Helens. The company, a unit of Alaska Air Group Inc., decided at the time to try to develop procedures that would minimize volcano disruptions in the future. More resources were added in 1989 with establishment of the Alaska Volcano Observatory, a public/private project, after the KLM near-accident.

“You’ve got to find a way to work around it,” said Ken Williams, Alaska Airline’s fleet captain.

One unbendable rule: Alaska’s planes never take off, fly or land in ash. It’s just too dangerous. Even taxiing at an airport with ash on the ground can clog air-condition systems and take a plane out of service for 36 hours. But that doesn’t mean you can’t find safe sky for flight.

A collaboration of aviation and weather experts created computer models that predict the trajectory for volcanic ash in Alaska or elsewhere in the Pacific Northwest. Whenever there’s an eruption, the airline scrambles off-duty pilots in to empty airplanes—some in Alaska Airline’s Boeings and others in smaller private planes—to take temperature and wind measurements at various altitudes. The data help validate satellite projections and computer forecasts.

“The more data you have, the more surgical you can be,” said Capt. Williams.

It doesn’t always work, of course. If Alaska Airlines can’t stay at least 35 miles away from ash, it doesn’t fly. And if it’s nighttime and pilots can’t see or if the airline isn’t sure of the actual winds aloft, it won’t operate. Last year when Mount Redoubt erupted again in Alaska, the airline couldn’t get its aircraft out of Anchorage early enough and ended up canceling flights and shrink-wrapping planes to keep ash from contaminating instruments and engines.

Ash is such a threat that Alaska Airlines puts all 1,400 of its pilots through an ash encounter simulation in recurrent training. In a cockpit simulator, engines suddenly flame out and the “aircraft” loses pressurization. Pilots, wearing smoke goggles and oxygen masks, must figure out how to restart the engines and return to an airport.

“Even though they all know it’s coming in the exercise, everyone says it’s eye-opening how big an event it is when it happens,” Capt. Williams said.

Scientists have no standard for what concentration of ash is safe and what is a danger to aircraft, but ash cloud does scatter enough with time and distance to not threaten jets. Fallout from Mount St. Helens actually circled the globe three times before fully dispersing, but flights were grounded only within a couple hundred miles of the source.

Capt. Williams thinks Europe will follow much the same path Alaska Airlines did after Mount St. Helens and establish procedures to collaborate quickly on drawing paths around ash whenever volcanoes erupt.

“It’s got to be more flexible,” he said.

I know that I have provided a lot of information for you to digest and some will even say that the video was a slow death by PowerPoint; however, you now know where to go for information, how to qualify the data received through normal channels, and are prepared to deal with Mother Nature regardless of the type airplane you are flying.

That is it for this week except for one more link below. Clink on the link and see where it takes you—-could be interesting. Next week I want to share a short story with you about a Marine Aviator from New York, which will be presented in two parts, and then we will finally start in on the Alaska Airlines series the following week.

Have a good weekend and thanks for making the “Third Dimension Blog” part of your week and until next week—-take care, fly safe, and my best to you and yours.

Show Me the Link