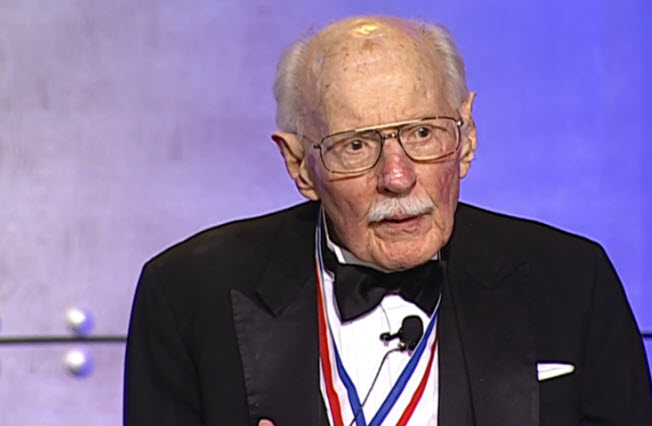 Good Morning to all and to all a Happy Friday,

This week I am going to once again highlight a man who I consider to be a cornerstone for the success of aviation, in our era, although the results of his efforts, and tireless spirit, can never be truly measured. Aviators have a proud tradition to build on, that is unequaled by any other country, and for those who will carry on this tradition rest assured you will be standing on the shoulders of Robert Hoover, and men like him, to take those accomplishments to the next level.

Now, on a lighter note my favorite Bob Hoover story is the one where he had just finished a performance in the F-86 in Europe, and was signing autographs and promoting aviation with the people in the crowd, when he was approached by a man who introduced himself as Mr. Schwartz. Mr. Schwartz asked Bob Hoover if he could speak with him and Bob Hoover said, “Sure, after I finish here I will be glad to.” Two hours later Bob Hoover went in search of Mr. Schwartz and once the conversation began he quickly recognized that Mr. Schwartz was actually Charles Lindbergh in disguise. Turns out Mr. Schwartz wanted to get Bob Hoover’s advise on the concept of an all jet fleet that Pan Am was contemplating for their future. It seems that the Lone Eagle recognized something in Robert Hoover that we can all now see.

The first item below is a video from the 2013 Living Legends of Aviation Awards at the Beverly Hilton in Los Angeles. Living Legend Bob Hoover presented the Freedom of Flight Award to the first and last men on the moon. There to accept the award for the late Apollo 11 Astronaut Neil Armstrong was Neil’s wife, Carol, and his two sons Mark and Rick. Apollo 17 Commander, Gene Cernan, was at the event and graciously accepted his award as well. During this presentation Bob also gave some personal insight into the lives of Neil and Gene that I think you will enjoy.

The Living Legends of Aviation Awards is produced by the Kiddie Hawk Air Academy, which is a non-profit organization located in Littleton, Colorado, and is dedicated to introducing, educating, and sparking children’s interest in aviation. The Kiddie Hawk Trainers give children ages 4 to 9 a sense of flight, albeit only a few feet off the ground, and it is their mission to give children the “spark” they need to help create the next generation of aviators and aviation Legends.

Please take the time to view the entire video and you will see that even at the age of 91 he still has the Right Stuff.The video will run for 22 minutes, but it is well worth your time, and the items after that video are ones that have been previously presented on this blog and may have some additional information that you may find informative and noteworthy.

Robert A. Hoover has thrilled millions of men, women and children over the last five decades with his acrobatic flying maneuvers. In addition, he has flown over 300 types of aircraft and flight tested or flown nearly every type of fighter aircraft.

Hoover was born in Nashville, Tennessee on January 24th, 1922. He learned to fly at Nashville’s Berry Field and worked at a grocery store to earn the money required for flight instructions. Almost immediately, Hoover began to try his hand at rolls and loops and taught himself aerobatics. The young pilot then enlisted in the Tennessee National Guard and was later received orders to Army Pilot Training School.

At the time that Hoover graduated, World War II was in full swing and the Allied invasion of North Africa had begun. Hoover’s first assignment was in Casablanca, Morocco, where he tested planes before they were sent into combat. Hoover’s next assignment was in Corsica with the 52nd Fighter Group, one of two Spitfire outfits in the Army’s Air Forces. After flying 58 missions, he was shot down off the coast of southern France and spent sixteen months in a German prison camp.

Upon his return to the United States after the war, Hoover was assigned to the Flight Evaluation Group at Wright Field in Dayton, Ohio. There he flew Japanese and German airplanes captured during the war. He also flew the latest aircraft being tested by the United States Air Force.

Hoover accepted a position with General Motors in 1948 as a test pilot for high altitude performance testing of Allison jet engines and the development of propellers. In 1950, Hoover would begin a 36-year association with North American Aviation and Rockwell International. He performed experimental flight test work on the Navy FJ-2 jet fighter and then the F-86D and the F-100. Hoover demonstrated the safe handling and flying qualities of the F-86 and F-100 series fighters to pilots all over the world.

Bob Hoover was the first man to fly the XFJ-2 Fury Jet and the Navy’s T-28 trainer. He is also the holder of several aviation records. In 1978, he set three climb-to-altitude records at Hanover Air Show in West Germany. And in 1985, he set a coast-to-coast record flying a P-51 from Daytona Beach to Los Angeles in five hours and twenty minutes.

During his career, Hoover has been awarded the Distinguished Flying Cross, Soldiers Medal, Air Medal and Purple Heart. He is the only person to serve two terms as president of the Society of Experimental Test Pilots and was captain of the United States Aerobatic Team in the 1966 International Competition in Moscow.

His famous yellow P-51 has been one of the main attractions at the Reno Air Races. His performances in the Shrike Commander have thrilled audiences as he swoops, rolls, loops and finally maneuvers the aircraft to a landing following his famed energy management sequence with no engines running.

Crowds are awed at Hoover’s performance in his Sabreliner, flying the standard or stock jet aircraft through a beautiful acrobatic routine. He currently serves as Vice President of Special Projects for Evergreen International Aviation, Inc., and is also a member of the company’s Board of Directors.

Robert A. “Bob” Hoover, the “greatest stick-and-rudder pilot who ever lived,” according to General James Doolittle, turns 90 on January 24, 2012. Last Friday at the annual Living Legends gala at the Beverly Hilton, Hoover reflected on his life experiences with the characteristic graciousness that also distinguishes him as the consummate Tennessee gentleman.

Hoover’s “infatuation with aviation” started in 1927 he learned of Charles Lindbergh’s non-stop flight across the north Atlantic in the Spirit of St. Louis. He told the crowd at Living Legends that his childhood heroes were Lindbergh, Roscoe Turner [and his pet lion], Eddie Rickenbacker and especially Jimmy Doolittle.

Fast forward to the early 1950s. Hoover was signing autographs at after performing in the F-86 at an airshow in Europe when an unassuming gentleman in the crowd introduced himself as Mr. Schwartz. The man asked Hoover if he could speak with him. Hoover told Mr. Schwartz that he’d have to wait until he finished signing autographs.

Mr. Schwartz waited patiently for Hoover to attend to his fans for nearly two hours. When the two finally met, it was apparent that Mr. Schwartz actually was the reclusive Charles Lindbergh in disguise.

Hoover’s jaw dropped. He had kept Charles Lindbergh waiting while he signed photos. Lindbergh wanted to discuss with Hoover the future of jets at Pan Am where he served on the board of directors. A bond between the two soon developed and Hoover helped Mr. Schwartz maintain anonymity while he explored new technologies with top aerospace companies, including North American Aircraft.

In 1969, Hoover was head of the Society of Experimental Text Pilots and he was charged with organizing SETP’s big celebration dinner. A once in a blue moon opportunity arose. Hoover had a long-shot chance of orchestrating the appearance of two of America’s biggest aviation heroes.

Hoover said the dinner was held in the very same ballroom at the Beverly Hilton as the Living Legends dinner. He was presiding over the ceremony at the same place on the stage behind the podium.

Seated at the head table, were the reclusive Mr. Schwartz [aka Charles Lindbergh] and Neil Armstrong, just back from the Apollo 11 mission to the moon. In the middle of the two was Hoover’s wife Colleen.

When Hoover brought up the house lights and introduced Lindbergh and Armstrong to the SETP members, they were awestruck at the sight of the two air and space pioneers.

The media was just as awestruck. They assumed Lindbergh never made public appearances and that Armstrong was still in quarantine after returning to earth. When the wire services and other media saw Lindbergh and Armstrong together they snapped hundreds of photos and sent them all over the world.

The photos all showed Bob’s wife Colleen, right in the middle of Lindbergh and Armstrong.

“It was the proudest moment of my life,” Hoover says. “There was dear Colleen, now my wife of 65 years, together with two of my biggest heroes. Her picture with them was seen all over the world.”

“To this day, I assume she is the only person to have sat with the first man to cross the Atlantic in an airplane on one side and the first man to set foot on the moon on the other,” Hoover writes in his autobiography Forever Flying.

That moment, some 43 years ago, is so emblematic of Bob Hoover. He speaks infrequently of his many accomplishments as a barnstormer, World War II fighter pilot, USAF and North American Aircraft jet test pilot and air show performer during his 60+ year flying career. He’d much rather laud others for their feats and stand on the sidelines as a humble spectator.

He also calls virtually all his friends on special occasions, such as birthdays and Christmas. Imagine my shock when, out of the blue, my hero Bob Hoover first called me several years ago on December 24 to wish me a Merry Christmas while I was driving on Pacific Coast Highway. I was so awestruck, I nearly crashed my car. That tradition has continued ever since, but now I’m less likely to lose control.

But, that’s Bob Hoover for you. No wonder the Living Legends gala was packed with all of his friends who were there to wish him a Happy 90th Birthday.

Enjoy the weekend, enjoy time away from aviation with family and friends, but most importantly, enjoy life – it is a short ride and tomorrow morning when we awake the ride is one day closer to being finished.