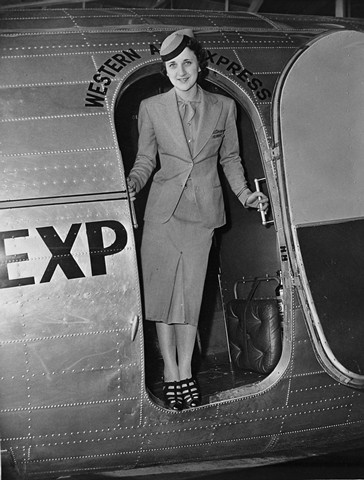 I hope all is well in your world and the weekend will bring a little rest, and time, with family and friends. Today I want to talk about a group of aviation professionals who have been a big part of aviation’s success. Do they get the respect they deserve? No, but we will save that discussion for another day.

So let’s talk about the history of a group of professional who are the first line of defense, for pilots and passengers, if a hijacking occurs; also, they are the ones who will help save your life should a non-standard event occur while airborne, or on the ground. So let us all remember to show them the respect and consideration they deserve.

History Of The Flight Attendant

Couriers worked up to the crash of the stock market in the mid 1920’s. With the couriers no longer employed a cost reduction in order to reduce cost, the responsibility of seeing to the needs of passengers rested with the copilot.

The copilot was required to assist the pilot in command as well serve food and drinks. With the improvement in passenger air travel the airlines began to reassess the responsibilities of seeing to passenger needs. In the early 1930’s Western Air was the first to hire stewards (male helpers).

These stewards were responsible for seeing to the passenger needs. Such as helping passengers aboard the aircraft, assisting with the baggage, serving refreshments and assuring that passengers put their cigars and cigarettes out.

By the late 1930’s, United Airlines, being the first, had hired stewardess, female helpers. These stewardesses were registered nurses and the idea was that the passengers would feel much safer in the hands of the stewardess. Their responsibilities included attending to those who became air sick. Back in those days, the airplanes mostly DC-3, were very noisy and not as comfortable.

Stewardess also handed out snacks to the passengers. Stewardesses at times were treated poorly by the male passengers groping, pinching and padding their butts. They were expected to work long hours making about $1 an hour and on average worked about 100 hours a month. Upon World War II the nurses left the airlines and joined the military. The airlines hired young women who were not nurses.

The airlines as part of their hiring practices required that the women to take an oath in which they would not marry nor have children. If an attendant was to get married and or have a child the airlines would terminate their employment with the airline; although, by the mid 40’s the airlines experienced a high turnover in stewardess to marriage. By the 1960’s, the flight stewardesses were dressed in miniskirts and hot pants.

Now, lets take a look at a quick video that represents the mind set of the young ladies who were employed during the “Golden Age of Aviation” as well as an article which I found on the United web site.

Of The Flight Attendant Profession

April 30, 2010 – Eighty years ago on May 15, 1930, United’s first stewardesses led by registered nurse Ellen Church took their initial flight on a Boeing 80A from Oakland/San Francisco to Chicago, making a 20-hour journey with 13 stops, 14 passengers and cruising at 125 mph.

Boeing Air Transit (the predecessor to United Airlines) wouldn’t hire her as a pilot, but did take her suggestion to hire nurses as stewardesses in order to calm passengers’ fear of flight. She believed that a flight attendant would help convince people that flying is safe.

Church was hired in 1930 as head stewardess and was put in charge of hiring. During World War II Church served with the Army Nurse Corps as a flight nurse, earning an Air Medal.

She moved to Terre Haute, Indiana, where she became director of nursing at Union Hospital. In 1964, she married Leonard Briggs Marshall, president of the Terre Haute First National Bank.

Ellen Church died in 1965 from injuries resulting from a horse riding accident. The municipal airport serving Cresco is named Ellen Church Field (KCJJ) in her honor.

To commemorate this anniversary, United is honoring that historic flight on May 15. This year, a Boeing 767 will make a 4-hour nonstop journey with nearly 240 customers and cruising at approximately 530 mph. United realized 80 years ago, as it still does today, that customers should be cared for while in flight.

“United’s flight attendants are proud professionals who for generations have cared for our customers’ safety and comfort,” says Alexandria Marren, senior vice president of on-board service, who will be on the May 15 flight. “Our flight attendants deliver a safe, pleasant travel experience for millions of customers every year, and we want to take the time to thank those who have proudly earned their United wings.”

On this honorary flight, United flight attendants will be invited to wear vintage uniforms that represent different eras of flight and provide a timeline of glamour and style leading up to 2011, when all United customer-facing employees will dress in new uniforms created by fashion designer Cynthia Rowley.

Kim McClellan, based in Washington Dulles and a United flight attendant since 1991, says, “I am proud to wear my United wings that represent our profession and the great service we provide our customers.”

Have a good weekend and when you have a little extra time take a look at the video below. It provides a good description of the “Golden Years of Aviation,” as well as it illustrates just how important Flight Attendants, as we know them now, were to the success of aviation.