Did A Man From New Zealand Beat The Wright Brothers Into The Air? - January 6, 2017

Imperial Airways and Pan Am – Their Business Plans Were Very Similar – January 13, 2017

Did A Man From New Zealand Beat The Wright Brothers Into The Air? – January 6, 2017 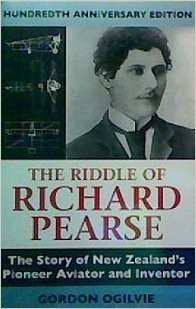 Good Morning,
Busy week here at the 3DB and I must admit that I am ready for the weekend, ready for some quiet time, and ready for time with the family.
This week I want to talk about who flew first; however, the purpose of this article is not to try and discredit the Wright Brothers but to simply bring another aviation pioneer to the forefront much the same way I talked about, Charley Taylor, Otto Lilienthal, and others in previous articles.
My first exposure to Richard Pearse was in November when a friend, who is married to a lovely lady from New Zealand, told me of the accomplishments of the man down under. So, I did a little bit of research and was very surprised at what I found. I have copied an article from the web that details the specifics of this man’s life, and this is followed a list of items that historians have credited to our pioneer.
Enjoy……………………………….

For the best part of a century, the activities of Richard William Pearse were largely unknown outside the small, close-knit, farming settlement of Waitohi, in the South Island of New Zealand, where he was born and where he flew his aircraft in the very early part of the 20th century.
Yet this farmer’s son, growing up and living far removed from the rest of the world, dedicated his lifetime’s energies to inventing things mechanical including the designing and building of a suitable combustion engine and three aircraft, in the first of which he would make a number of short pioneering flights.
Yet he was compelled to work mostly in secret in order to avoid those who opposed him on religious grounds (If God had wanted man to fly he would have given him wings), and others who claimed that he was a lunatic in his attempts to build a flying machine.
His achievements were even more remarkable in that, unlike the Wright Brothers who employed skilled engineers and who later enjoyed the luxury of American Government sponsorship, Pearse designed, financed, and built everything himself. And he did not even have access to a university or library, but gained his knowledge solely through reading the magazines that he subscribed to.
The years 1902/1903 date his achieving the world’s very first mechanically powered flight(s). Dating suggest a first flight on 31st March 1903 – the day before April fool’s day. Corroborated eyewitness accounts from school children at the time and in their 70/80s when interviewed, together with other somewhat conclusive evidence from the local school records, confirm that at least one of his powered flights took place on 31st March 1903. And there were numerous other trials taking place both before and after that. His most active flying year was obviously 1903.
Usually Pearse taxied and ‘flew’ his aircraft using his own, or a neighbor’s, paddock. However if the paddocks were wet this made such use impossible, and Pearse would use the road running past the school and his farm.
There is also other evidence pointing to him flying in the winter of 1903 – specifically on the 10th of July 1903 – just a few months before the Wrights’ first flight. (Note: the seasons are reversed in the Southern Hemisphere). Apparently the plane ‘landed’ on top of one of the many 12ft. high, mainly uncut, box-thorn or gorse hedges surrounding the paddocks in the neighborhood. He then left it there because of a heavy fall of snow. Meteorological records for that time show that snow fell on the 11th of July 1903, but that there was no snow during any of the years immediately before or after that date.
In his later trials he used a small hillock to take off from and flew over a 30ft. high river terrace to land on a mostly dried up river bed. From eye-witness reports, the lengths of his flights have been estimated to have varied between 50ft. and 400/500 yards.
However it was some fifty years later that investigators were alerted to Pearse’s flying activities by the discovery of a roughly constructed ‘utility’ airplane, his third, which never flew but which contained remarkably innovative features, which was found hidden in his work shed after he had died.
Subsequent searches of the area then discovered some remains of his earlier aircraft which had been thrown onto a rubbish dump in the mostly dried up river bed where he had last landed almost fifty years before. These included engine cylinders, a cast iron piston, and a propeller.
In 1974 the NZBC was involved in the making of a documentary film entitled “Richard Pearse.” While this turned out to be rather less than the hoped for historic record, it did serve to bring Pearse’s achievements to the attention of the NZ populace at large. For one scene some shaft-horses were supposed to tow Pearse’s first aircraft into a position for a simulated take-off using the replica. Unfortunately however one of the animals stamped heavily on the foot of the actor leading them and then galloped off across the paddock, fortunately straight into a 10 mph wind. Whilst everyone watched in horror the replica took off quite normally and rose as far as the towrope would allow. It then stalled and nose-dived into the ground. The stability was remarkable and it lifted off with no tendency to roll. Luckily its bamboo frame was resilient and little actual damage was done. During this episode, which was watched by a number of spectators including four professional cameramen and five or six amateurs all of whom had packed away their cameras; thus the most spectacular event of that day went unrecorded!
In 1980 the replica was subjected to wind-tunnel tests at Auckland University, which confirmed that indeed it was possible for such a machine to have been capable of flying much like a microlight of today.

The following items have been credited to our Aviation pioneer by historians in New Zealand, and elsewhere, and when you see the word microlight substitute ultralight – they are one in the same :

o Pearse is recognized by some as the first man in New Zealand to lift off from the ground flying his home built powered aircraft.
o His achievements, and the flights made in 1902/1903 at Waitohi in New Zealand, have little or no similarity to the well-documented flights which took place by the Wright Brothers at Kitty Hawk on the 17th December 1903.
o However, Pearse must be the first and the only aviator who had at that time designed his own unique internal combustion engine; and designed his own aircraft (pre-dating the microlight by about seventy years).
o He built both the engine and aircraft in his secluded elementary workshop with minimal assistance, enabling him to make a number of ‘flights’ piloting the aircraft himself.
o Pearse has been recorded as having stated he never flew with his first aircraft. Although he had been established in his own secluded workshop building engines and aircraft for five years previous to the year 1903, it has not been possible to establish how many aircraft he had built and experimented with before he was seen flying in 1903.
o Pearse in a letter to the press mentions the year 1904 when he began studies to achieve aerial navigation, and that true aerial navigation was not achieved until 1905.
o There are accounts of a smaller machine preceding the better known flights of 1903 followed by a larger circular aircraft, another one of which little is known about, but which was built after he had moved to a very quiet secluded spot at a place called Milton.
o Many years later the larger helicopter style, the original example of this circular aircraft, is now on display at the Auckland Museum MOTAT.
o The various engines were equally numerous: relics of the 1900 two cylinder engine exist, a later more advanced four cylinder engine, an undiscovered multi-cylinder engine supposedly used at Milton, an engine for agricultural purposes, and a motor cycle engine which he used on the roads. And finally the very complex powerful engine fitted to the helicopter machine.

o There were a number of pioneering features of the first known aircraft which are in use in modern aircraft even today. Pearse’s advanced design used a tricycle landing gear, which would only come into general use thirty years later. And his aircraft really resembles the microlights which would only be introduced almost seventy years later.
o In particular, other early aviation pioneers such as the Wrights used primitive wing warping, or ‘side tipping’ as Pearse described it, to attempt to control an aircraft in flight. However Pearse introduced a flap system in place of the usual aileron which would avoid twisting the wing. This closely resembles the method of control now generally used in high speed aircraft.
o And unlike the Wrights, Pearse wisely decided to eliminate the need for an engine with a flywheel. He did this by having a propeller firmly bolted onto the crankshaft, thus saving considerable weight. Arriving at the correct design for the propeller was in itself a monumental task. However the choice of direct drive was obviously justified: from 1906 onward this method came into general use.

Have a good weekend, enjoy the video below, and take care/fly safe.