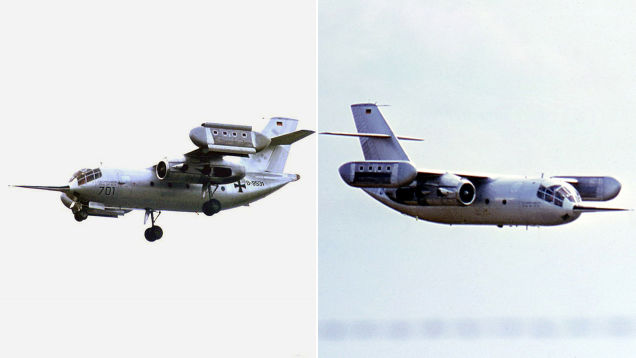 Welcome back to the 3DB and this week I want to talk about the first, and only, Jet VTOL Transport. There have many projects that have attempted VTOL in the past but most incorporated propellers. The Germans decided that this was not going to work for them so Dornier came up with a better idea.

As the Cold War heated up in the early 1960s, West Germany revived the longtime dream of an airplane capable of vertical takeoff and landing. The Bundesluftwaffe was concerned about the vulnerability of its air bases to Soviet attack, and in 1962 the Federal Ministry for Defense issued a specification for VTOL aircraft that could operate from small forward bases or even the autobahn. Three German firms pursued fighter, strike and transport variants.

Built by Entwicklungsring Süd, a consortium of Messerschmitt, Bölkow and Heinkel, the VJ-101 supersonic fighter featured wingtip tilt-jets as well as supplementary lift jets in the fuselage. First taking off vertically on April 10, 1963, with American test pilot George Bright in the cockpit, it subsequently became the first VTOL aircraft to exceed Mach 1. On September 14, 1964, however, a faulty roll-rate gyro with reverse polarity was installed. As Bright pushed the stick left to correct a slight roll to the right during a conventional takeoff, the airplane rolled faster and crashed. The Martin-Baker ejection seat saved Bright’s life, though his back was broken in the accident. The VJ-101 project was fi­nally canceled in 1968.

The VAK-191B, built by the Vereinigte Flug­technische Werke, used adjustable ducts similar in principle to those of the British Aerospace Harrier. It was regarded as a possible replacement for the Fiat G.91 when work began on it in 1962, and indeed Fiat was involved in the project. The first of three prototypes took to the air on September 20, 1971, and the transitions between vertical and regu­lar flight were first achieved on October 26, 1972. The three VAK-191Bs made 91 flights totaling 12 hours before the program was canceled in 1975.

The most unusual—and promising—of the experimental trio was a transport produced by Dornier Flugzeugwerke. Previously known pri­marily for flying boats, bombers and the tandem-engine Do-335 fighter (see “Piston Power Pin­nacle,” July 2011 issue), Dornier began dabbling in short-takeoff-and-landing development when it modified its Do-27 light transport into a twin-engine STOL airplane with tilting pusher propellers, the Do-29. Three were built, the first flying on De­cember 12, 1958. The tests were successful, with the aircraft achieving a stall speed of just 38 mph. The props, capable of tilting 110 degrees, were tested on approaches at about a 20-degree angle of descent.

Dornier produced three prototypes: the Do-31E1, equipped only with the Pegasus engines, for strictly horizontal flight testing; the Do-31E2, for static airframe testing; and the Do-31E3, capable of operating in full VTOL mode, with all engines in place. In addition, two hover rigs—a small and a large version—served as test-beds.

The Do-31 program’s chief test pilot was Drury Wood, a former U.S. Marine who had flown Vought F4U Corsairs from carriers during World War II. “I graduated from the Navy Test Pilot School in Class 8 with George Bright, the pilot of the VJ-101,” Wood recalled. “He went to Germany first, and he recommended me. Dornier called me in July 1964. With my Test Pilot School education and experience at the naval test center, Douglas Aircraft, Northrop and the U.S. Army, I felt that I was as prepared as anyone to test this new VTOL jet transport concept. I started with 145 flights in the small hover rig, a cruciform gadget with four lift engines to test the control system first flown by Karl Kössler, a Dornier pilot. Next came the large hover rig. It looked like the basic airplane but was a hover-only device, with six lift engines and two Pegasus. This was the biggest adventure because it had to prove the hover envelope and stay within the limits of the runway. I had to learn how to take off, hover and land in less than three minutes in a thing with no aerodynamic characteristics.”

The Do-31E1 made its first flight on February 10, 1967. By July the Do-31E3, dubbed Fire Stool, was flying with all 10 engines. On November 22, Wood performed the first hovering test in the E3, including full transitions to and from horizontal flight. Looking back on the testing, he said: “The E1 was an honest, straightforward conventional configuration with no bad habits and the added benefit of having the nozzles of the Pegasus for short aerodynamic takeoff and landings. I was comfortable in it after the first flight. The E3 had the comfort of the E1 in conventional flight, but the procedure for vertical takeoffs and landings had to be worked out. Every time I made a vertical takeoff or landing I learned something else. I had enough time to do what was necessary and do show things like fly backward and do circles while hovering. I could make an approach, hover, turn around and go back the way I came in or fly backward down the runway, but we never did have the opportunity to establish the full envelope. I flew the E3 at least 10 times before I could overcome the feeling that I was going to stall when I saw the airspeed go under 100 knots.”

Wood made several memorable flights during the test program. “Testing with the big rig showed that the only major problem the pilots would have would be if the Pegasus nozzles were not calibrated [properly],” he said. “In one test the nozzles were off: 87 degrees [indicated] in the cockpit gave over 90 down. The exhaust gases bounced off the ground and back into the Pegasus intakes, which made for a spectacular attempt at takeoff. We banged down the runway in that test, earning the rig the name ‘Reluctant Dragon.’

“Everything else went as planned,” Wood added, “and we proved that we could land in a 150-foot square laid out in grass. There were no major or minor problems that we could find.” Asked whether there were any notable weaknesses exhibited by the Do-31, Wood said: “There was no fooling around—when the landing was started, you landed. No go-around once in the exhaust gas cloud.” He also recalled a few less-than-perfect tests: “The landing gear collapsed once. Another time there was a fire in the cockpit—which showed how difficult it is to get out of an ejection seat on the ground.”

On May 27, 1969, Wood and a German copilot flew the Do-31E3 from Oberpfaffenhofen to Le Bourget for the Paris Air Show. While his copilot was filing their flight plan, Wood pondered how best to demonstrate the aircraft’s potential. “A light bulb went off,” Wood recalled, “and I had it: a record flight. Easy! The way records work is that they are for a specific class—single engine, multiengine, land, sea, altitude, etc., but most important, type. There was no airplane in the world like the Do-31E. We were in a class by ourselves.

“I looked around for the chief of flight test, Hans Schabronath. It took just a few minutes to give him the details, and then he was on the phone. Within an hour my copilot and I were members of the Féd­ération Aéronautique International. The FAI head was already in Paris. We were heavily instrumented. It could not have been more convenient if we had planned it.

“I wanted to make certain that the unique characteristics of the airplane were fully utilized for this flight, so there could be no criticism of the records. I would make a very short takeoff, using the Pegasus nozzles, and a vertical landing in Paris, using the lift engines and nozzles. The weather at Paris was overcast but with nothing frontal, and en route was mostly VFR [visual flight rules]. The takeoff was uneventful, and we headed out on course, climbing to 9,000 meters.

“The airplane was not pressurized. This was certainly something that would have to be corrected for any kind of production run, but at that time it was giving me a problem. My mask was not working. If I could not get oxygen, we would have to abandon the flight. There was a small plunger at the base of the regulator that could give a steady flow if kept down. It was too small to hold for a long period of time, but I looked at my ballpoint pen and saw that it was a close fit. I pressed it with the pen, then kept an eye on the oxygen gauge, marking time and quantity, and figured that I could make it.

The D0 31 was to be used as an infantry transport plane. But changes in nuclear strategic doctrine — and exorbitant costs — prevented it from leaving the prototype stage. (Airbus Group photo)

“By the time we got to Paris, my finger was getting numb, but as we let down I descended to breathing altitude and took off the mask. We were given approach procedure and approval. I made an ILS [instrument landing system] approach, and we broke out at about 800 feet. I started the lift engines to make a vertical landing and asked the tower for air taxi to parking. The answer was ‘Mais non!’ So I had to stop being VTOL and go conventional, using the cement. We had five minutes of fuel left with the lift engines running—but we also had five world records, for speed, distance, altitude, speed over a course and duration. That was 42 years ago, and they still stand.”

German President Gustav Heinemann presented Wood the Federal Service Cross with Ribbon in April 1970 for his work on the Dornier VTOL. Earlier, in 1968, the Society of Experimental Test Pilots had given him the Iven C. Kincheloe Award for outstanding professional accomplishment in flight testing.

Despite the Do-31’s promise, the program was canceled in 1970 due to a lack of funding. “There was never any serious consideration from the biggest member of NATO, the U.S.,” Wood recalled. “If we could have had an American partner, it would have been different. We had an agreement with Convair, but they reneged.”

The Do-231, a commercial version with 100-passenger capacity, never left the drawing board. “The airplane was never intended to be a commercial airliner, and we had zero discussions with Lufthansa,” Wood said. “It was a small military ‘C-130’ that needed no runway and would carry 35 paratroopers. It would have been a great COD [carrier onboard delivery] and troop insertion vehicle. This is, or was, the only vertical-takeoff-and-landing jet transport in the world that would fly backward, sideways, take off and land in its own shadow, and I am the only pilot in the world who ever did that.”

On May 4, 1970, the Do-31E3 made its last public flight during an international air and space exhibition at Hanover. After languishing in storage at Oberpfaffenhofen for years, the E3 was restored and is now on display at the Deutsches Museum Flugwerft Schleissheim at Ober­schleissheim, near Munich. The Do-31E1 can be seen at the Dornier Museum at Friedrichshafen.

Enjoy the video below, enjoy time with friends this weekend, and keep family close.