The Man Who Changed The Complexion of Aviation, and Space, Using Simplicity as The Foundation For His Success – May 27, 2016

I hope your week was good/productive and now that the weekend is here perhaps you are ready for a brief respite from the hustle and bustle of the work week. This week I want to talk about a man who began his career as an industrial designer and then moved in to a number of different areas including aircraft design. However, before we move forward with the story bout Norman Bel Geddes transatlantic flying boat let’s talk about the myths surrounding the Kalinin K-7.

(Analysis of a persistent Internet hoax.)

One of the more persistent hoaxes drifting about on the Internet concerns an airplane called the Kalinin K-7. Built in the early 1930s, the K-7 was Russian, and big. Really big. Russian designers those days displayed a positive passion for sheer size; Igor Sikorsky’s Ilya Muromets, for example, which flew just 10 years after the Wrights’ first powered hop, had four engines and a wingspan of more than 100 feet. The British firm of Handley Page built something similar. But the K-7 dwarfed them all. Its wing was an immense ellipse with a span of 174 feet — just 20 feet shy of a 747’s — eight feet thick and 35 feet from leading to trailing edge at the center. In a civil version, 120 passengers were to be seated spanwise within the wing. Twin booms supported the smallish empennage, and six engines of 750 horsepower each stood side by side on its leading edge. One or two pusher engines — reports differ — were added when the gigantic monoplane, which was of steel construction, was found to be heavier than anticipated. Its reported all-up weight was 84,000 pounds.

The K-7’s landing gear was unusual, being carried in two pods resembling amphibious floats but about the size of motor homes. In the military version, these were equipped with machine gun turrets. They were connected to the main structure by a thicket of struts and by a couple of very large tubes that, I suppose, housed stairways for the gunners.

All this is extraordinary enough, considering the year, but, on the principle that nothing is so impressive that it cannot be improved by a little falsification, someone has produced several renderings of a sort of Megalopseudokalinin — it deserves a dinosaur-like name — and some fanciful text to accompany them. I’m not sure what kind of software is used to create this kind of thing — maybe something for game design, where fantastic structures are standard equipment — but the concoction has at least 18 engines and bristles with guns, including a couple of turrets that seem to have been borrowed from a battle cruiser.

Some people leave skepticism behind when they turn on their computers, and I have seen this bit of skillful fakery excitedly passed along as a genuine Russian airplane, claimed to have a wingspan comparable to the Empire State Building laid on its side — although I think the effort would be wasted, since the height of the Empire State Building is well-known. It is 1,250 feet, omitting the antenna, or nearly five times the wingspan of an A380.

Below is the photo, you are most often to see on the internet, of the K-7 which is slightly larger than the real airplane featured in the opening photo of this weeks blog…..

Now that we have addressed the K-7 myth let’s talk about Norman Bel Geddes and his futuristic design. 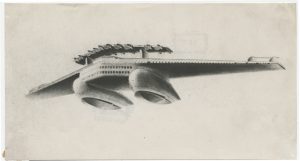 Norman Bel Geddes (1893-1958) was an accomplished industrial designer known for aerodynamic form that was as much about aesthetics as wind resistance. He began as a theatrical designer before venturing into furniture, cars, trains and aircraft. Perhaps his most innovative design was Airliner Number 4, a transatlantic boat with a 528-foot wingspan— a 747’s is just under 200 feet.

The proposal included twenty 1900-horsepower engines capable of lifting Airliner Number 4 to 5,000 feet and attaining a cruising speed of 100 mph. The 450 passengers could choose from nine decks including private dining rooms, a solarium, a gym, six shuffleboard courts, a dance floor, a library, and a concert hall.

Along with the members of the orchestra, Airliner Number 4’s 155-person crew included telephone operators, masseuses, manicurists, and—ahead of its time—a personal trainer.

Unfortunately, Airliner Number 4 didn’t make it much farther than the drawing board, but its legacy included Howard Hughes’ Spruce Goose.

Not a lot of good information to bring you on Airliner Number Four but I do have a quick video on the life of the designer as well as a link to a few photos on unique airplane designs that do fly.

Have a good weekend, take care with family and friends and keep them close, and remember that life is short. Enjoy each and every moment as though it was your last.