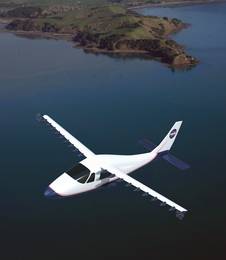 NASA is currently working on a set of experiments that may ultimately make electric propulsion for airplanes a viable concept for General Aviation. The proposed transition to electric could occur in the next ten years if all goes well but is General Aviation ready for this change? As always, time will tell and I look forward to being a part of the transition.

Enjoy the article/video and have a good week. 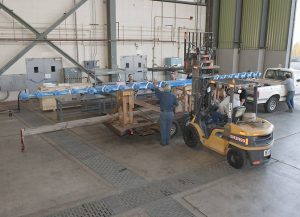 The arrival of a unique experimental demonstrator at NASA Armstrong Flight Research Center on February 26 may herald a future in which many aircraft are powered by electric motors. The Leading Edge Asynchronous Propeller Technology (LEAPTech) project will test the premise that tighter propulsion-airframe integration, made possible with electric power, will deliver improved efficiency and safety, as well as environmental and economic benefits. Over the next several months, NASA researchers will perform ground testing of a 31-foot-span, carbon composite wing section with 18 electric motors powered by lithium iron phosphate batteries.

The experimental wing, called the Hybrid-Electric Integrated Systems Testbed (HEIST), is mounted on a specially modified truck. Testing on the mobile ground rig assembly will provide valuable data and risk reduction applicable to future flight research. Instead of being installed in a wind tunnel, the HEIST wing section will remain attached to load cells on a supporting truss while the vehicle is driven at speeds up to 70 miles per hour across a dry lakebed at Edwards Air Force Base. Preliminary testing, up to 40 mph, took place in January at Oceano County Airport on California’s Central Coast.

The LEAPTech project began in 2014 when researchers from NASA Langley Research Center and Armstrong partnered with two California companies, Empirical Systems Aerospace (ESAero) in Pismo Beach and Joby Aviation in Santa Cruz. ESAero is the prime contractor for HEIST responsible for system integration and instrumentation, while Joby is responsible for design and manufacture of the electric motors, propellers, and carbon fiber wing section.

The truck experiment is a precursor to a development of a small X-plane demonstrator proposed under NASA’s Transformative Aeronautics Concepts program. Researchers hope to fly a piloted X-plane within the next couple years after removing the wings and engines from an Italian-built Tecnam P2006T and replacing them with an improved version of the LEAPTech wing and motors. Using an existing airframe will allow engineers to easily compare the performance of the X-plane with the original P2006T.

Each motor can be operated independently at different speeds for optimized performance. Key potential benefits of LEAPTech include decreased reliance on fossil fuels, improved aircraft performance and ride quality, and aircraft noise reduction.

LEAPTech is a key element of NASA’s plan to help a significant portion of the aircraft industry transition to electrical propulsion within the next decade. According to Mark Moore, an aerodynamicist at Langley, “LEAPTech has the potential to achieve transformational capabilities in the near-term for general aviation aircraft, as well as for transport aircraft in the longer-term.”