The Man Who Made Weather Flying Possible – November 4, 2016 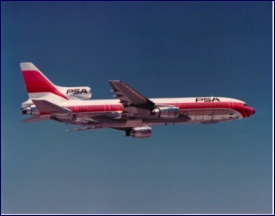 Welcome back to the 3DB and I hope all is well with you and yours. This week I want to go back to 1978 and talk about the commercial airline industry and a few of the Legacy Carriers. While most of you may remember some of the airlines I will talk about I suspect some of them may have been forgotten by you and many others.

Mergers and failures are difficult to keep up with, but there are some significant changes that have taken place since  the 1980s, and the decades after, that can provide us with some perspective of the state of the industry. Do you remember which airlines were around in 1978 and which ones are no longer in existence? If the answer is no, here’s a list of who is not around:

These facts are very telling on the success of deregulation, but there are a number of experts who will argue that this is normal for any industry whether it is airlines or typewriters. However, the important thing to note here is that other industries were not regulated by the CAB.

Airline failures and mergers (what I referred to as absorbed above) occurred for some very simple economic reasons. First, and the most important, was to grow the airline and increase the route structure. The second reason was to control the minor to major markets to offset or minimize loss in the major to major markets where there was stiff competition. The third was only the strong will survive.

The Failure of Braniff and Eastern

Braniff was truly the most colorful airline of all times. The airline began back in the 1920s and as you might imagine there were air mail contracts that helped them with that start. Braniff had a colorful and successful history; however,  when it came to deregulation CEO Harding Lawrence made a calculated decision to expand operations rapidly on a newly opened set of domestic and international routes. This was done quickly and new routes began with little advanced marketing or training of personnel. Bad idea…..

Lawrence believed that deregulation would be retracted and that Braniff would retain its new routes. When deregulation was codified into law Braniff found itself with huge cash needs, for operations, but insufficient cash flow because the customer base was marginal at best. Again, its market failure stemmed from poor management strategy and execution; however, a friend, who flew for Braniff, once told me that the CEO had conducted a teleconference for employees and his take on the business strategy was that Braniff would be the biggest airline in the U.S. or they would break the bank. “Damn the torpedoes and full speed ahead” was his philosophy. The rest is history.

Eastern Airlines, formerly known as Eastern Air Transport before the airline was forced to change its name in 1934 because of the air mail scandal that we have discussed previously, was a Florida airline with a proud tradition and a solid route structure. However, most people will blame Eastern Airline’s failure on poor management practices and bad labor relations which actually began under the direction of Eddie Richenbacher. Still, the primary reason for the failure can be attributed to Frank Lorenzo who gutted the airline, alienated the unions and finally forced a strike which led to the failure.

Lorenzo was finally banned from ever being a part of any airline operation, but the damage he did to Eastern and others was reprehensible and his punishment should have been jail and reparations paid to the employees, and families, who lost everything.

The Failure of TWA and Pan AM

TWA and Pan AM were part of the big four that made aviation what it is today and the demise of TWA is the saddest of all the fallen carriers. TWA was not always TWA but started life as Transcontinental Air Transport, The Lindbergh Line incorporated in 1928, and merged with Western Air Express in 1930. The merger was forced by Postmaster General William Brown and the airline was then known as Trans Western Airlines. In the mid-forties the name was changed to Trans World Airlines.

TWA will always be known as the Howard Hughes airline, and Carl Icahn will always be known as the man who destroyed that airline. TWA seemed to always play catch up instead of leading. Howard Hughes was responsible for the Constellation taking TWA ahead of the pack, but then he refused to move away from the Constellation into the jet age and left the airline floundering. TWA had an east to west route system but never developed its north to south route until after deregulation which put them at a real disadvantage when we talk about competing in an unregulated environment. The story has many ups and downs but TWA 800 was the final blow and things never rebounded.

Pan Am is another sad tale. Pan Am was the pioneer of international aviation, and during the regulatory era, it had been awarded worldwide routes but no domestic routes.

Shortly after deregulation, Pan Am proceeded to rectify the situation by purchasing National Airlines. National seemed to be a good fit with its Miami location and offered a route network that naturally drew planes into the Pan Am hub at Kennedy Airport. Pan Am failed at that merger, not because it lacked foresight or resources, but because it poorly executed the merger. Pan Am’s expertise was in delivering international operations where customers readily tolerated delays of an hour or more. It was unable to deliver a competitive degree of on-time performance when compared with domestic services of other U.S. carriers. It was unable to integrate its systems and its work forces effectively, and unable to modernize its fleet. In the last decade of its operations, Pan Am lost more than $12 billion. It survived by selling off its assets. The Pan Am Building in New York, the Intercontinental Hotel Chain, land in Tokyo, and its routes to Japan and London were all sold for top dollar. Once those were gone, the airline itself disappeared.

Gone, but not forgotten.

I know this was brief but I have a reason. Former employees of each of these airlines have web sites that contain a wealth of information on who, what, when, and where. Take some time to explore the story that they tell. A good starting point for Pan Am is http://www.panam.org and for TWA I would start with http://www.twasilverwings-kc.com/htdocs/TWA_historypage1.htm. A good starting point for Eastern is http://www.eara.org/history.html and for Braniff I would start with http://www.braniffpages.com/.

Have a good weekend, keep family and friends close and remember to take care of you. If you don’t, then you can’t possibly take care of anyone else.