NASA Says Faster Than Light Interstellar Travel Is In Our Future - April 28, 2017

Another week has passed us by, the weekend is upon us, and I am ready for a vacation…..perhaps we all could use some time off as we approach mid-year………so I think I will go to San Andres, Colombia for a week of beach time and a disconnect from cyberspace.

Believe it or not, NASA is serious about creating faster than light travel, and have released a new batch of concept images showing exactly what a spacecraft equipped with a star-hopping warp drive might look like.

Created in collaboration between Dutch artist Mark Rademaker and Nasa physicist Dr Harold White, the illustrations show a craft powered by an Alcubierre Drive – a hypothetical engine that was first suggested in 1994 as a way of achieving faster than light speeds.

Alcubierre’s device worked by distorting space-time, expanding the space behind a ship and contracting the space in front of it to create a ‘warp bubble’ that essentially moves space and time around the object, rather than actually accelerating the craft to impossible speeds.

For all its craziness, physicists conceded that such a warp drive might be theoretically possible but that it would require staggering amounts of power – something equivalent to the mass-energy of Jupiter, a planet 317 times the mass of the Earth.

However, in 2012, Dr White announced that he had managed to finesse Alcubierre’s original plans to reduce the amount of mass-energy needed from that of a gas giant to a spacecraft the size of the Voyager 1 – and, even more surprisingly, that he was working with a team from Nasa to further develop his ideas.

Unfortunately none of this really brings the idea of a working Alcubierre Drive any closer, not least because the design rests on being able to use something called ‘exotic matter’ as fuel.

This is a hypothetical substance that physicists suggest might have negative mass. In terms of discovering it the best we can say is that we haven’t found a way to rule out its existence and when we compare it to dark matter – another scientific oddity that we’re pretty sure actually exists but that we’ve never directly seen, let alone created – the chances of using exotic matter are slim to none. 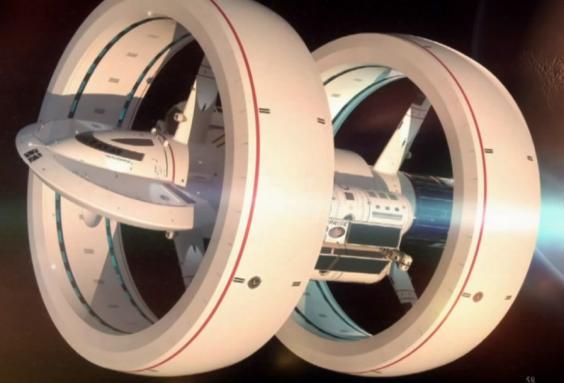 This all means that even Dr White – one of the most optimistic scientists when it comes to the warp drive – will only comment on the possibility of faster than light travel by saying “the field equations predict that this is possible, but it remains to be seen if we could ever reduce this to practice.”

Nevertheless, it seems that NASA is happy to fuel people’s imaginations instead, and looking at the concept images it’s impossible not join in – and hope a little.

With such a spacecraft humanity could travel to nearby stars in just weeks (with current propulsion techology it would take 80,000 years) making it possible to explore entirely new worlds and even contact alien life. We may never create such a craft for many generations – but that doesn’t mean we shouldn’t dream.

Imagine a starship—a vessel capable of ferrying human beings from one solar system to another. Would it have wings and a cockpit? Or would it look like an aircraft carrier hauled out into the void and fitted with flame-belching rockets and glowing ion drives?

Science fiction has offered us all sorts of visions of interstellar spacecraft, from avian-inspired Klingon birds of prey to hulking masses such as the Borg cube. In general, sci-fi leans toward sleek designs with lines borrowed from planes or cars, since those are the kinds of looks we’ve been conditioned to think of as “fast.” But if there’s no air in space, why make things aerodynamic? Does it matter what a spacecraft looks like?

Yes, it turns out, and it depends upon what kind of space travel you’re looking to undertake. The reality of starship design is more complex than anything Hollywood has dreamed up and implanted in our collective unconsciousness.

While a manned interstellar mission isn’t exactly on NASA’s upcoming schedule, researchers haven’t abandoned the topic to science fiction. In fact, the 100 Year Starship initiative—which began as a DARPA-funded contest to lay the foundations for a flight across the stars, gathering physicists, entrepreneurs, and anyone seriously interested in long-distance space travel—just finished its annual symposium this past weekend.

One of the participants of the 100 Year Starship project is Marc G. Millis, founder of the Tau Zero Foundation. The foundation has proposed candidate technologies and designs, including the Icarus unmanned fusion-powered probe, which would accelerate (theoretically, of course) to one-tenth or one-fifth the speed of light. Icarus, as it’s currently envisioned, isn’t the sleekest space ride. The skyscraper-size behemoth is comprised almost entirely of rows and clusters of spherical fuel tanks. But according to Millis, Icarus isn’t a definitive, catch-all prediction of what an interstellar craft might look like. It’s simply the design that might make sense to build first.

We asked Millis, who once led NASA’s Breakthrough Propulsion Physics Project, to take us through the basics of starship design.

One look at the Icarus design—or its predecessor, the Daedalus—and it’s clear what starships don’t need: wings. The only real-world spacecraft that bother with wings are ones designed to make regular landings on runways, such as the retired Space Shuttle, the upcoming Lynx (a suborbital two-seater from XCOR) or the Dream Chaser, an in-development orbital craft from Sierra Nevada. And wings aren’t even required for landings. Like the Russian Soyuz capsule, SpaceX’s Dragon currently splashes down in the ocean (though SpaceX plans to move toward rocket-powered launchpad landings).

In both the near and far-term future, experts such as Millis imagine interstellar vessels won’t spend much of their time in an atmosphere. Perhaps the small ships that carry people from surface to starship will remain winged, but truly interstellar vehicles can scrap aerodynamics and all of the design principles that are beholden to reducing wind resistance. A starship doesn’t need to be sleek or have a pointy nose—even the stocky Battlestar Galactica is pointlessly aircraft-shaped. If anything, the equivalent Cylon ships in the rebooted TV series are more rational interstellar travelers, with their spindly arms and flagrant disregard for the entire air-centric history of aerospace.

Predicting what the first unmanned starships might look like is relatively simple. In the case of Icarus, for example, the entire structure is devoted to propulsion. It’s a colossal rocket, albeit a weird fusion-powered one.

Millis says the first person-carrying starships, however, will be dominated by the technologies that keep those passengers alive. Consider gravity, a necessity on long-distance spaceflights. In prolonged zero-g, the human body erodes, losing bone and muscle density. “With the physics we know, you create gravity with a giant centrifuge, a rotating cabin, basically,” Millis says. The spinning disc on the Jupiter-bound Discovery One in 2001: A Space Odyssey illustrated this concept well, but Millis says that to better simulate Earth gravity, the real thing would actually have to be much larger. The smaller the centrifuge, the less consistent the centrifugal force is across a crew member’s body—the head, in other words, will feel lighter than the feet. Aside from being disoriented by chronic light-headedness, if the goal is to re-create the way blood circulates under the influence of gravity, consistency is key.

Have a good weekend, take care, and join me next week when we will visit and interesting event in aviation history that you may have overlooked.