Orville Wright, Samuel Langley, and The Battle With The Smithsonian - October 9, 2020

Orville Wright, Samuel Langley, and The Battle With The Smithsonian – October 9, 2020 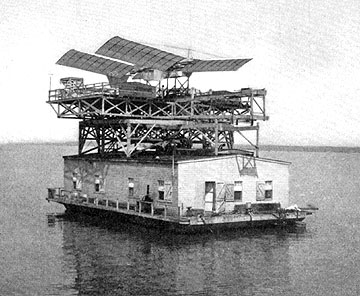 Welcome back and thanks for stopping by and sharing your week with the 3DB. Today we will talk about how the Smithsonian tried to deprive the Wright Brothers of their place in history and in fact announced to the world that it was Samuel P Langley who held the honor as the first to fly. The battle between Orville Wright and the Smithsonian continued for many years and it was not until, with the help of Glenn Curtiss, the Smithsonian resurrected the Aerodrome project to prove their point, and subsequently failed, that they finally had to admit hey were wrong.

So, let’s talk about how these events unfolded and how the “Wright Flyer” was finally given the place of honor which it was due.

The question of whether or not Samuel P. Langley’s Aerodrome was able to fly carrying a man on it was settled in December of 1903 when it crashed twice into the Potomac River with Charles Manly aboard. It did not fly. But, was this really true? Everyone seemed to think so and the Aerodrome was put into storage at the Smithsonian Institution.
To prepare for the interesting saga of whether or not the Langley Aerodrome actually flew, we must now talk about the Wright Brothers’ flights.

As our readers know, Wilbur and Orville Wright succeeded in sustained, heavier-than-air flight in a controlled flying machine they called “The Flyer.” They began experiments in 1899 and tested their first glider in 1900 at Kitty Hawk, North Carolina. In 1901 and again in 1902, they tested refined gliders and learned new dimensions of dealing with the vagaries of flight. They solved the three basic requirements of sustained, heavier than air, controlled flight one aspect at a time. Then, in 1903, they tested their latest machine with an engine to provide power and a man aboard at the controls. Their Flyer worked and the rest is history. In 1904 and 1905 they refined the Flyer to increase controllability and stability and by 1906 had a fairly workable and reliable flying machine. Now they needed to patent their invention to protect their primacy in the development of flying machines.

The Wright Brothers discovered that the U.S. government was not particularly interested in purchasing their flying machine because the Army had spent $50,000 on the Langley Aerodrome and did not want another embarrassment. But, there was interest in both France and England. Complicating this was the fact that other people were getting close to achieving what the Wrights already achieved. Chief among them was Glenn Curtiss. Using early Wright designs and information distributed widely by Octave Chanute, other aeronauts were coming close. The Wrights decided that they would not fly any more until they had their patent protection. Trying to sell flying machines without demonstrations was not easy. Once the patent was granted by the U.S. Government, the Wright Brothers began to fight off patent infringements through litigation. Among those who infringed on the Wright patent was Glenn Curtiss. Curtiss, having lost a patent infringement suit to the Wrights, was keenly interested in breaking the Wright patent and in one tactic, decided to prove that another person actually developed the first flying machine capable of flight before the Wrights. This person, in Curtiss’ claim, was Samuel P. Langley using his aerodrome. Coincident with this situation was the fact that there were those that felt that Langley never had a chance to prove the airworthiness of the aerodrome; among them was Charles Walcott, the man chosen as Langley’s successor as Secretary of the Smithsonian Institution. Some people believed that the problem with the Langley aerodrome was not the aerodrome but rather the catapult launching mechanism atop the houseboat that caused the aerodrome to fail.

In 1914, Walcott allowed Curtiss to borrow the aerodrome to run some tests to determine whether or not the machine was actually capable of sustained flight with a man aboard. Curtiss took the machine and reconditioned it. He added pontoons to allow take-off from water (the houseboat used by Langley was no longer in existence). And, Curtiss did other things to the aerodrome that changed it in ways that made it different from the aircraft of 1903. As it happened, the aerodrome was able to make short flights over a lake in New York State with Curtiss and others aboard taking turns at the controls. The tests initially included using the original engine made by Charles Manley but a Curtiss engine was substituted for later tests. After the tests were completed, the aerodrome was restored to its 1903 configuration and returned to the Smithsonian where it was put on display.

In the Smithsonian Report for 1914, an article by A.F. Zahm described the experiments with the Langley aerodrome and concluded with the claim that the Langley Aerodrome was capable of flight and thus was “The first man-carrying aeroplane in the history of the world capable of sustained free flight.” This claim was echoed by Glenn Curtis and Smithsonian officials and it was clearly stated on the aerodrome’s display label. Orville Wright was not happy about this claim and thus began the feud between Wright and the Smithsonian.

Some years later, Orville Wright made an extended loan of the original Wright Flyer to the South Kensington Science Museum in London. The Smithsonian Institution had asked for the Flyer to put on display but the loan to London had been made. Further, Orville Wright had said that it was his intention to leave the Flyer to the Science Museum unless he left other instructions before he died.

Enter Charles Abbott as Secretary of the Smithsonian who succeeded Walcott. He began efforts to correct the false claims made by the Smithsonian. First, he published a paper in the Smithsonian Miscellaneous Collections in 1928 that stated (among other things) that the original statements by the Smithsonian were not entirely correct. This statement was not the strong disavowal sought by Orville Wright that would forever support the Wright’s claim as the true inventors of the airplane. Continuing in his effort to mend fences and correct the record with as little embarrassment to the Smithsonian as possible, Abbott enlisted Charles Lindbergh to help persuade Orville Wright to transfer the Flyer to the Smithsonian. Abbott published another paper in 1942 through official Smithsonian channels that fully analyzed the 1914 tests of the aerodrome and put the episode into perspective. The article acknowledged the injury caused to the Wrights by the false claims. It also repudiated the claims as to the airworthiness of the aerodrome and it endorsed the claim that the Wrights were the inventors of the airplane. Abbott concluded by stating the following:

“If the publication of this paper should clear the way for Dr. Wright to bring back to America the Kitty Hawk machine to which all the world awards first place, it will be a source of profound and enduring gratification to his countrymen everywhere. Should he decide to deposit the plane in the United States National Museum (the Smithsonian) it would be given the highest place of honor, which is its due.”

No one knew if this statement would work but upon the death of Orville Wright and the reading of his will, a codicil was found that in fact, gave the Flyer to the Smithsonian. The Flyer was brought back to the United States in 1948; a year after Orville Wright died and placed at the entrance of the Arts and Industries building in the place of honor mentioned by Abbott.

Interesting story and now we all know the how, and why, of how it all happened. Have a good weekend, take a look at the video below, and enjoy your time away from aviation/work.