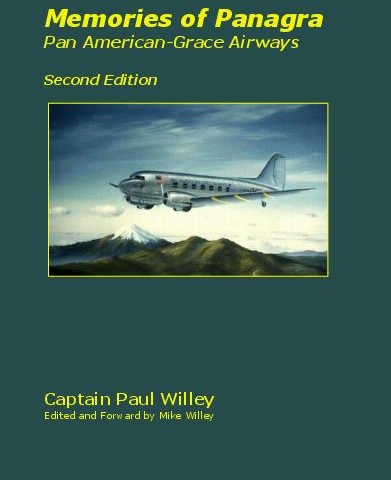 Today is Part Seven of seven in the series on Panagra.If you missed Part Six Click HERE.

In 1945 as World War II was ending in the Pacific, the airlines of the world were looking toward the post-war era. Panagra, with operating headquarters at Lima, Peru was no exception. Like the other airlines, it eyed the new aircraft which had been developed since 1941 and made a purchase of four Gold Plate Constellation aircraft from Lockheed Aircraft, Burbank, California.

Panagra’s experience had been limited to twin-engine aircraft. The 4-engine Constellations required a Flight Engineer in the cockpit, in addition to two pilots. Lacking such trained flight engineers, Panagra turned to Pan American Airways which had a corps of experienced flight engineers, many of whom would be surplus when Pan Am’s wartime contract ended.

In preparation for my position with PAG, I made a trip to look into housing and schooling for my five children. I found the schooling inadequate, particularly for those who expected to gain admission into colleges and universities in the United States.  I was living in Burlingame, California at the time and my children attended Burlingame schools. The woman who lived across the street from me was the principal of a Burlingame grammar school. Her name was Elsiann Irvan. When I presented my problem to her she suggested that she come to Lima. She would bring desks, books, etc., live in our home and teach our children in the large enclosed back porch of our home. She would teach per the Burlingame curriculum so that our school would be accredited to any college in the U.S.

When I returned to Lima and told other Panagra personnel that a U. S. school principal was coming to Lima to teach our children I was deluged with requests to let other children join the classes. At the time, I was living at 620 Avendia Dos de Mayo and the house was not nearly large enough to accommodate all who wanted to attend.  Panagra families who wanted to join in the American school project were the Domnings, Havilecks, Achilles, McCleskys, et. al.

A Mr. Rosenshine of the American Chamber of Commerce at Lima helped us with the red tape at the Ministerio de Educacion. The Ministerio suggested the name “Colegio Franklin Delano Roosevelt”. They required us to teach Spanish and religion which requirement we met by teaching Bible stories.  A house with four rooms suitable for classrooms was found a few blocks away on Avenue Dos de Mayo. We were fortunate to find Mrs. Gretler who had a U. S. teacher’s certificate and a Peruvian, Miss Ines Acosta, who had attended the University of Wyoming in Laredo and Northwestern University in Evanston, IL. So, we started with Elsianna Irvin teaching 2nd and 3rd grade, Miss Gretler teaching the first grade and Miss Acosta teaching the kindergarten. Each year, as the children advanced in age, one more grade was added to the school.

One of the flight engineers from Pan Am’s Treasure Island base, who went to Panagra, was Dale Ferguson. He was a bachelor and lived in our home in Lima. In the beginning, Mrs. Irvin also lived in our home.

Our children’s names were Raquel, Margo, Sherryl, Bill, Jr. and Bonnie. At a birthday party for our daughter, Raquel, Mrs. Irvin introduced Ines Acosta and Dale Ferguson. Not long afterward they were married. They live in Lima today, almost 50 years after the beginning of the Colegio Roosevelt.

Part of my contribution to “Memories” is from a story that my mother told me after the death of my father in 2005.

In 1944, shortly after the birth of my sister Paula, my father was scheduled to fly a short maintenance test flight in a DC-3 that had just come out of the shop.  Panagra was meticulous in their operations and one of the rules was that an airplane coming off of maintenance would be flown on a test flight, generally up to 18,000 ft prior to it being put back on the line to assure that its performance would be sufficient for the tough mountain flying routes.

On this particular day, my father asked my mother if she would like to go along.  There were only going to be two people on the flight, my father, and the maintenance engineer.  My mother, not an aviation aficionado, first declined but after thinking it over said “Heck, OK I will go”.  She left my newborn sister with the maid that helped us out in the house and took off for the airport.

Sitting in the Co-Pilot seat next to my father, she describes the takeoff and climb out of Lima as beautiful and told how they climbed north toward the mountains and the border of Ecuador.   They were high over the mountains when she looked out the window and starkly realized there was nothing but rugged terrain below them.   Thinking of her new motherly responsibilities and her current position she turned to my father and asked “Hey, what happens if we have a problem with the airplane up here, where are we going to land”?

She said that the cockpit erupted in laughter as she realized that, although this was a situation the pilots of Panagra were in every day, this little trip brought it home to her in a very visceral way.

Suffice it to say she did not make many other flights like this.

Panagra never seems to go away.  In 1982 I was flying gliders in Chardon, Ohio with the Cleveland Soaring Society.  I had my own high performance glider (a Schleicher ASW-15B) and also spent time towing gliders in a Bellanca Scout.  One of our members was Phil Contrereas.  Phil worked for an international company in the Cleveland area and had done much traveling in South America.

Since he was familiar with the tough mountainous terrain in the area, I was telling him the story of how, when Braniff acquired Panagra, the Panagra crews were tasked with training the Braniff crews about flying out of the unique airports in South America.

On an early Braniff flight, A DC-8 coming out of La Paz, Bolivia had scraped its tail on departure and done substantial damage due to the fact that the airline had supplied the wrong VR (rotate speed) Somehow, as the story goes, they received a rotate speed for sea level instead of the high altitude LPB departure.  The result was that the aircraft rotated at what would have been minimum controllable airspeed, scraped its tail and then launched off the end of the runway.  Fortunately, at LPB, the runway is located at the top of a hill and the departure slopes off the hill to the valley below.  This saved the flight and it was able to continue on to Miami.

After I finished the story, Phil said:

“Oh, I remember that trip, I was on that airplane!”

Every once in a while, I still find people who know of the airline and its operations in South America.  It still has a wonderful reputation and I am proud to have been involved, even as only a “Second Generation Panagra”

I hope you have enjoyed this special series on Panagra. The personal stories that are presented in each chapter are unique and represent history telling as it should be – first person. Take care, enjoy the day, and join me next week when we will be talking about ?????.