Airmanship, and Luck, Was Needed After Both Engines Flamed Out – September 29, 2014

Good Morning—today is Friday and I hope that the approaching weekend provides some relief to the long days we have all had. This week I want to present a story about the Piper Cub in World War II. I wrote about this about a year ago but recently I have had two emails, from friends, with articles about the L-4 and they told me I needed to write about this. They were a little surprised when I sent them the link for the article that I had written so I thought it would be good to revisit the subject.

The Piper L-4 Grasshopper of WW2 was the military version of the highly popular pre-war J3 Cub, by which name it was more widely known to service personnel. Of the 5,500 L-4 variants produced between 1942 and 1945, some went to liaison squadrons and of the USAAF, but the vast majority went to US Army Ground Forces, for use as Air Observation Posts (Air Ops) with the Field Artillery. In both air and ground forces, the L-4 was also used as a flying Jeep, among other things carrying priority mail and personnel between HQs and command posts. Its Continental engine produced only 65 hp, yet the L-4′s excellent short field performance enabled it to operate from the smallest of improvised airstrips, including roads, adjacent to command posts.

Unlike most other combat aircraft, the L-4 was unarmed and unarmored. It was one of the smallest aircraft of WW2 and, with a cruising speed of only 75 mph, it was the slowest. Nevertheless, it has been claimed that a single L-4, directing the fire power of an entire Division, could bring a greater weight of explosives to bear on a target then any other aircraft of that period. With the exception of the atomic bomb carrying B-29 Superfortress, no other single aircraft had the destructive capability of the diminutive L-4.

It was most widely used in Europe, where more than 2,700 served with the Field Artillery, and of these nearly 900 were lost through enemy action or in accidents. Of those that survived the war, about 150 were shipped back to the US, most of the remainder eventually being sold to civilian purchasers in Britain, France, Switzerland, Denmark and elsewhere in Europe. More than 60 years on many

f these are still flying with, in recent years, an increasing number being restored to their original military configuration and markings.

So successful was the L-4 that it’s military use continued on through to the Korean War, and as recently as Vietnam. Today, hundreds still fly on as civilian light aircraft, some as meticulously restored military aircraft and others in colorful civilian schemes

All L-4 models, as well as similar, tandem-cockpit accommodation aircraft from Aeronca and Taylorcraft, were collectively nicknamed “Grasshoppers”, though the L-4 was almost universally referred to by its civilian designation of Cub. The L-4 was used extensively in World War II for reconnaissance, transporting supplies, artillery spotting duties, and medical evacuation of wounded soldiers. During the Allied invasion of France in June 1944, the L-4’s slow cruising speed and low-level maneuverability made it an ideal observation platform for spotting hidden German tanks waiting in ambush in the hedge-rowed country south of the invasion beaches. For these operations the pilot generally carried both an observer/radio operator and a 25-pound communications radio, a load that often exceeded the plane’s specified weight capacity. After the Allied breakout in France, L-4s were also sometimes equipped with improvised racks, usually in pairs or quartets, of infantry bazookas for ground attack against German armored units. The most famous of these L-4 ground attack planes was Rosie the Rocketeer, piloted by Maj. Charles “Bazooka Charlie” Carpenter, whose six bazooka rocket launchers were credited with eliminating six enemy tanks and several armored cars during its wartime service. 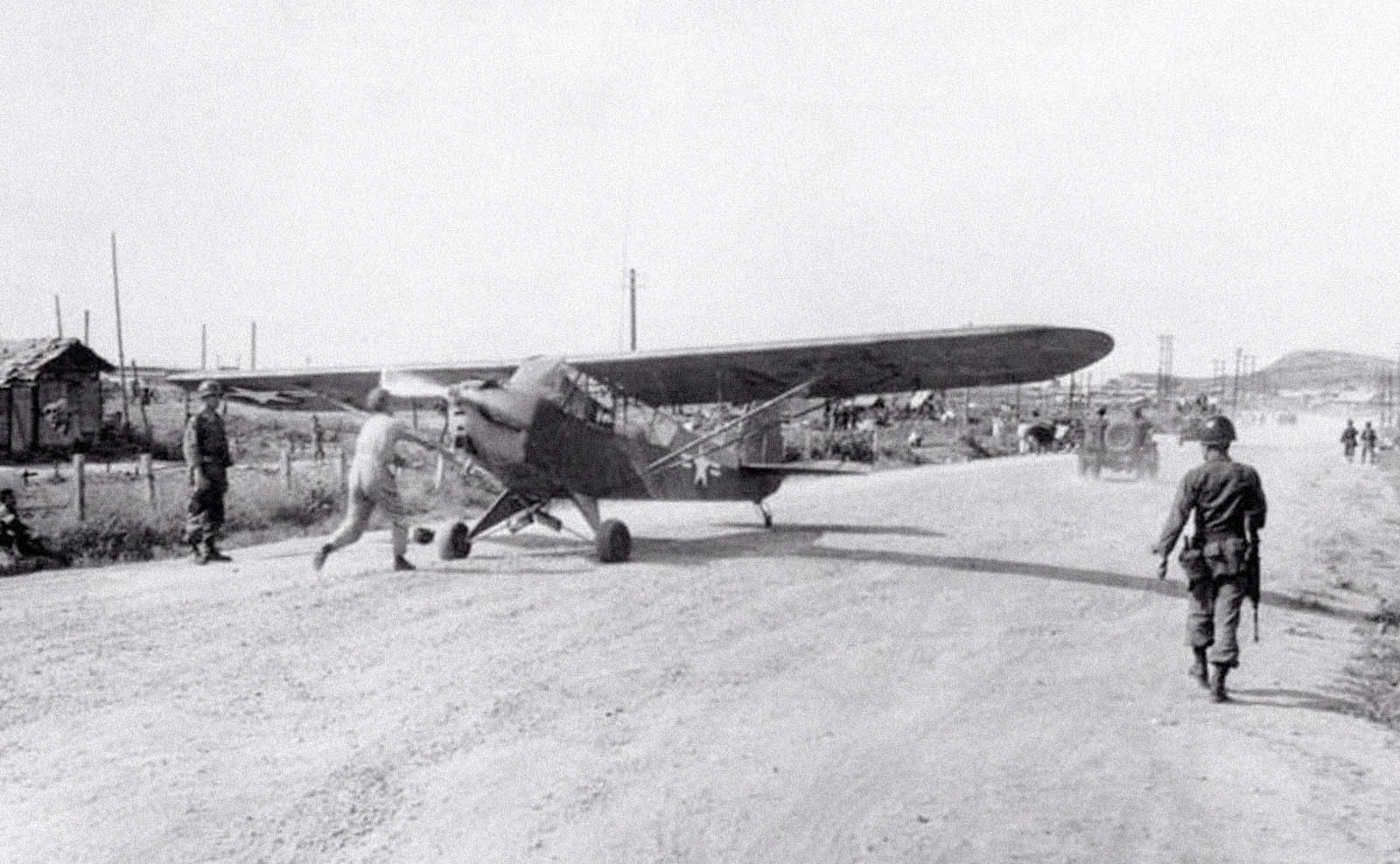 (A Piper L-4 Grasshopper gets hand-propped to start near the front lines.) 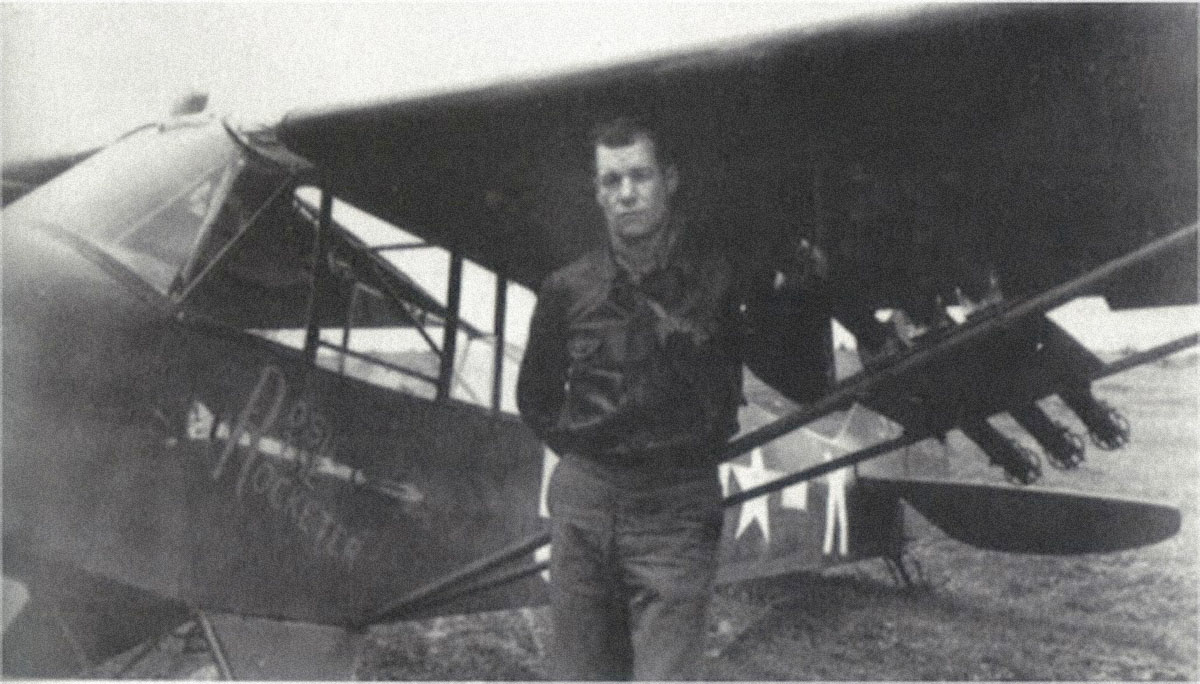 When allied forces were planning the invasion of Sicily they needed a way to have the L-4 Grasshoppers participate because of their effectiveness at setting up artillery strikes; however, the range of the L-4 made it impossible for them to fly from allied bases so they built an aircraft carrier just for the Grasshopper. They converted a Navy LST into a mini carrier and aboard each LST there were able to carry four aircraft. The LST was fitted with a flight deck made of timber and pierced metal runway mats and the usable length of the area for take-off was 12 feet wide and 216 feet long.

A very interesting fact about the L-4, and LST operations, was the introduction of the Brodie Device.  A cable was suspended between two outriggers mounted to the side of a LST.  Dangling from the setup was a harness with a loop that could slide down the cable.  The plane would be suspended from the harness, the pilot would climb a rope ladder to the cockpit, apply full power, and the plane would fly down the cable.  When it reached the end of the cable, the plane would detach from the harness and  take flight.  To “land,” the pilot would fly the plane into the harness, where it would catch on a hook mounted on the top of the wing.  The plane would then slide down the cable until it hit the end and come to a swinging halt.  It would then be brought onboard, serviced and be readied for another flight. The video below shows how the system worked.

I hope everyone has a good weekend and will enjoy time away from work and aviation. Enjoy time with friends, and family, and remember life is short. Take some time to enjoy the world around you.