For me the week has been busy and full of surprises – some good surprises and some not so good; however, I hope for those of you reading this you have had a good week and life has been good for you and yours. This week I want to go back and connect you with an aviation pioneer whose showmanship, and skills, were legendary. His name – Roscoe Turner – and you may be a bit surprised when you discover who Gilmore is. 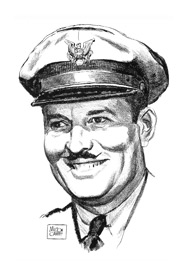 The inimitable and greatly admired Colonel Roscoe Turner became one of the renowned names in aviation in the late 1920s and early 1930s. This was the flying era that abounded with the achievements of a small group of gallant pilots, dedicated engineers, courageous air leaders, and audacious daredevils. Roscoe Turner was a leader among those who pursued their destiny in the skies and bet their lives, not only on their own skill, but also on the soundness of their aircraft’s design. While true that they flew to set new records, thrill huge crowds and reap the rewards of victory, they also gave a vital stimulus to the technical development of aircraft. Their deeds kept alive a spark of interest in aviation when there was little public or governmental concern for it. They also advanced the technology which was so vital to the nation during World War II and which served as the foundation for supersonic and space flight.

Roscoe Turner was born in a small rural clapboard cabin near Corinth, Mississippi, on September 29th, 1895. As a boy he developed a great affinity for speed. First he was fascinated by the speed of the train that passed near the family farm. But his father scolded him, saying that was too dangerous, and handed him the reins to a mule pulling a plow. When a caravan of early automobiles chugged past the farm lane, Roscoe set his heart on becoming a chauffeur and a race driver. At that, his father gave him a serious lecture and said: “You’ll never be worth anything if you keep fooling around with things that burn gasoline instead of oats.”

Finally, at the age of sixteen, Roscoe ran away from home and made his way to Memphis, Tennessee, where he eventually became an ice truck driver, then a taxi driver and finally an expert auto mechanic for local Packard and Cadillac dealers. Just before World War I, he tried to enlist in the aviation section of the Signal Corps, but was turned down because he lacked the required two years of college education.

After the U.S. entry into World War I, Roscoe Turner enlisted in the Ambulance Corps and was sent to France. The following year he transferred to the aviation section, but the armistice ending the war was signed before Turner could see combat.

In 1919, Turner and a partner formed the Roscoe Turner Flying Circus and for five years put on death-defying performances. Roscoe subsequently purchased a Sikorsky cabin plane. For a while, he decked it out as a flying cigar store. Later he used it to hold teas for society women and make radio broadcasts aloft.

Hollywood beckoned and Turner became a movie stuntman and actor in the Howard Hughes film, Hell’s Angels. He played the role of a dashing British airman, but his Sikorsky went down in flames as a German bomber in the movie. Soon Turner became fascinated with speed flying, and entered the free-for-all event of the 1928 National Air Races. But his little Timm biplane was no match for the speedy Lockheed and he finished the race last.

At this point, Turner helped organize Nevada Airlines in 1929, operating between Los Angeles, Reno, and Las Vegas. After movie star Bebe Daniels christened the four Lockheed “Vegas”, he converted one into a racy showpiece and proved the practicality of transcontinental passenger service by flying the “Vegas” from Los Angeles to New York with four passengers aboard. After the Governor of Nevada bestowed him with the title of “Colonel”, Roscoe acquired a resplendent uniform and sported a neatly trimmed and waxed mustache. His appearance soon became his trademark.

Claiming his Lockheed to be the fastest in the world, Turner now entered the Los Angeles to Cleveland Derby of the 1929 Air Races. But when the race was over he was disqualified for landing after the 6 P.M. deadline. Undaunted, Turner took part in the free-for-all race and finished third.

In a brilliant move, Turner convinced the Gilmore Oil Company to buy a Lockheed Air Express and to animate the company’s lion head trademark. He bought a lion cub and named it “Gilmore,” in 1930. Before long, Roscoe became known to millions as the man who flew with a lion, and crowds flocked to see the intrepid pair. The pair set an East-West record and make a record flight between Canada and Mexico. They also entered the 1930 Derby Race from Los Angeles to Chicago. But Wiley Post won and Roscoe and Gilmore finished fifth. It would prove to be Gilmore’s last race, for after 25,000 miles of flying he became more payload than Turner could afford to carry. Turner retired Gilmore from flying. 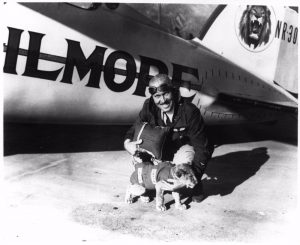 A new era began in 1932 for Turner when he acquired a Wedell-Williams racer to satisfy his quest for speed. Naming it the Gilmore Lion, he flew it in the 1932 Bendix Race and took third place. Next he flew it in the Thompson Trophy Race, but scrappy Jimmy Doolittle won, while Roscoe took third. The following day he placed third in the Shell Oil Speed Dash. Later, he set a new transcontinental record of 12 hours 45 minutes.

In 1933, Turner encountered little difficulty in winning the year’s Bendix Race from New York to Los Angeles and his record stood for five years. He also took first place in the Shell Oil Speed Dash and in the Thompson Race quickly grabbed the lead. When Turner lands, well ahead of the field, he received presented the Thompson Trophy. In one of the most poignant moments in racing, however, the judges disqualified him for not re-flying a pylon cut on the first lap. Even so, Turner later received the Clifford Henderson Trophy as America’s number one speed pilot when he set a new West-East transcontinental record.

For the 1934 Air Races, Turner modified his racer’s engine to make it the most powerful in the air. With it, he won the grueling Thompson Trophy race his first win in three tries. In October, 1934, twenty planes departed from England in the greatest air race in history – the Robertson Race to Australia. Turner and his crew thundered their Boeing transport to Athens. Then they raced on to Baghdad, Karachi, Allahabad, and Singapore. When the plane finally reached Melbourne, Turner and his crew received 1,500 pounds for their effort, but few realized that the race had cost Roscoe $35,000 out of his own pocket and it would take him five years to pay it off.

After taking second place in the 1935 Bendix, Turner quickly took the lead in the Thompson Classic. But, suddenly during the race, smoke filled the cockpit. Roscoe managed to bring to bring his racer down safely. He lost the Thompson but made thousands of friends through his display of skill and daring.

Turner flew his radically new Turner-Laird “Meteor” in the 1937 Thompson Race. After 18 laps he assumed the lead. But the sun blinded him and he turned to re-fly a pylon he thought he had missed. But race officials claimed that he didn’t cut the pylon and the incident cost him the race.

When Turner crossed the finish line in 1938, he became the only two-time winner of the Thompson, and also received the Allegheny-Ludlum Trophy for setting a world’s lap record of 293 miles per hour.

In the 1939 Thompson Race, Turner again missed a pylon and had to re-circle it. But his skill and speed enabled him to move from last to first place and capture the classic. Then, when he received the Thompson Trophy, Turner said, “Make room for the photographers. It’s their last chance to shoot me. Racing is a young man’s game. I’m 43!”

At this point Turner established the Roscoe Turner Aeronautical Corporation in Indianapolis in 1940, and opened an aviation school. When America’s entry into World War II appeared imminent, he formed the Turner Aviation Institute to help train the flight instructors, pilots and mechanics that the national war effort would require.

Shortly after Pearl Harbor Turner itched to be in combat, Lieutenant General Frank Andrews told him, “You are making a bigger contribution to the war effort in training men to fly.”

After the war Turner prophesied, “Aviation is going to control the world economically and militarily whether we like it or not. Airpower is not merely military aviation, it is also civilian aviation and air power is peace power.” Throughout the 1950s and 1960s Turner continued to contribute to the development of aviation through his flight school and aircraft sales and service facility at Indianapolis.

Have a good weekend, enjoy time with family and friends, and remember that life is short. Enjoy each and every moment.

PS- The video below is original footage from the premier of Howard Hughes movie Hells Angels, and about one minute and thirty-five seconds in to the video Roscoe and Gilmore make an appearance on the red carpet. By the way, Roscoe Turner was one of the stunt pilots in the movie Hell’s Angels and if you have never seen this Howard Hughes classic click HERE.