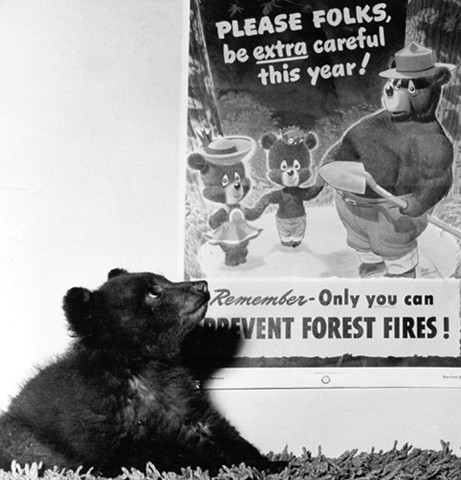 The story of Smokey the Bear, his real name is “Smokey Bear,” is well known to most but did you know that Bill Piper, owner of Piper Aircraft, was responsible for getting Smokey to Washington? That is our topic today along with a few facts about Smokey.

One spring day in 1950 in the Capitan Mountains of New Mexico, an operator in one of the fire towers to the north of the Capitans spotted smoke and called the location into the nearest ranger station. The first crew discovered a major fire being swept along the ground between the trees, driven by a strong wind. Word spread rapidly and more crews reported to help. Forest Rangers, army soldiers, Native American crews, men from the New Mexico State Game Department, and civilian volunteers worked together to gain control of the raging fire. As soon as they contained the fire to one spot, the wind would push it across the lines. During one of the lulls in firefighting, a report of a lonely bear cub who had been seen wandering near the fireline was reported. The men left him alone because they thought the mother bear might come for him.

About 30 firefighters, mainly soldiers but also a Capitan High School student, were caught directly in the path of the fire storm, barely escaping by laying face down on a rockslide for over an hour until the fire had burned past them. In spite of the experience, the firefighters were safe except for a few scorches and some burned holes in their clothes.

Nearby, the little cub had been caught in the path of the same fire and had not fared as well. He had taken refuge in a tree that was now completely charred. His climb had saved his life but left him badly burned on the paws and hind legs. The soldiers removed the little bear cub from the burned tree, but they did not know what to do with him. A rancher, who had been helping the firefighters, agreed to take the cub home. A New Mexico Department of Game and Fish Ranger heard about the cub when he returned to the fire camp and drove to the rancher’s home to get the bear. The cub needed veterinary aid and was flown in a small plane to Santa Fe where the burns were treated and bandaged. 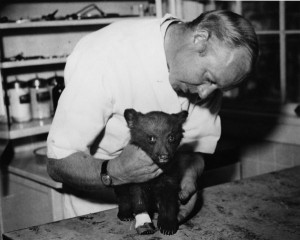 The news about the little bear spread swiftly throughout New Mexico. Soon the United Press and Associated Press picked up the story and broadcast it nationwide. Many people wrote or called to inquire about the little bear’s progress. The State Game Warden wrote an official letter to the Chief of the Forest Service, presenting the cub to the agency with the understanding that the small bear would be dedicated to a publicity program of fire prevention and conservation. The go-ahead was given to send the bear to Washington, DC, where he found a home at the National Zoo, becoming the living symbol of Smokey Bear. 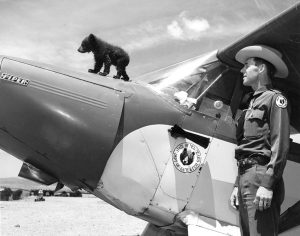 After Smokey, the bear cub, was injured in the Capitan, New Mexico forest fire, he was moved to Santa Fe, New Mexico. There, the children of Ray Bell and Homer Pickens nursed him back to health. 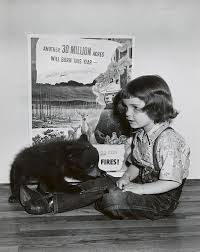 Young bear cubs grow rapidly, and Smokey soon become unmanageable. A decision had to be made. The Game and Fish Department of the state of New Mexico and the United States Forest Service made the decision to dedicate the bear cub to the boys and girls of America.

Bill Piper, owner of Piper Aircraft Co., sent a brand new Piper Cruiser to Santa Fe so they could fly Smokey to the National Zoo in Washington, D.C. Can you imagine trying to travel with the bear cub in an airliner?

On the eve of the flight, prominent Santa Fe artist Will Schuster hurriedly painted the Smokey Bear logo on the plane. Frank Hines, the Piper dealer in Hobbs, New Mexico, piloted the plane. Homer Pickens, Assistant Director of the New Mexico Game and Fish Department, tended to Smokey for the duration of the several days’ plane trip to Washington, D.C. I really can’t imagine holding a bear in my lap in the back seat of a small plane for a trip across the United States. Finally, in ceremonies at the Nation’s capitol, Mr. Pickens presented Smokey to the boys and girls of America as a living symbol of forest fire prevention. 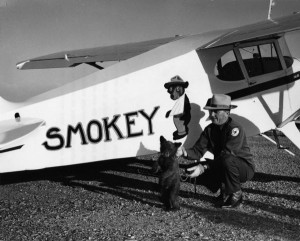 Smokey lived to a ripe old age of 70 at the zoo in Washington and many newspapers ran obituaries on S. Bear when he died. A real life legend that lives on in the hearts, and minds, of many Smokey was buried on the grounds of his museum in Capitan, New Mexico. 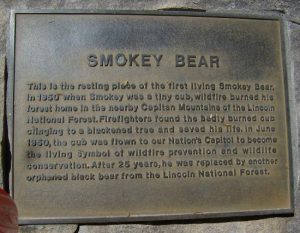 Have a good weekend, enjoy each moment with family and friends, and fly safe/be safe.