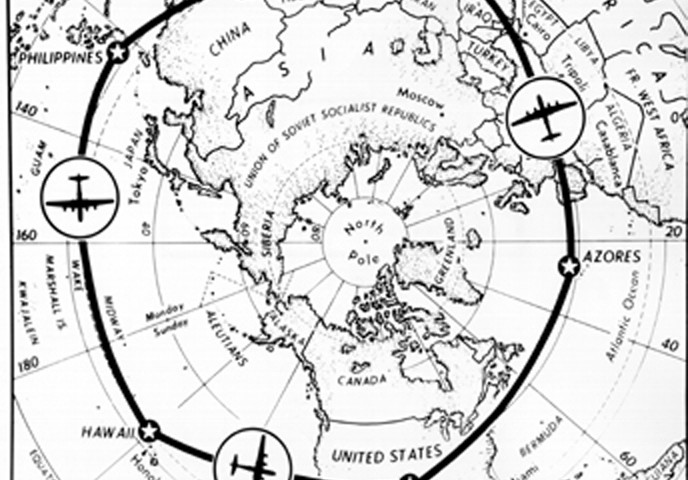 So, what airplane carries the distinction of being the last piston engine bomber? The Boeing B-50, which looks a lot like the B-29, was produced beginning in the late 1940s with a total of 60 being produced. One of those airplanes, Lucky Lady II, was the first aircraft to fly around the world non-stop……94 hours in the air.

The Design and Development of the B-50

Nestled in aviation history between the well-known B-29 and the huge B-36 Peacemaker, the Boeing B-50 Superfortress is often overlooked, yet was an important aircraft in the U.S. Air Force of the late 1940s and the 1950s.

To secure funding for the new aircraft, and due to the aircraft’s large number of modifications from the B-29, the designation was later changed from the B-29D to the B-50.

Differences Between the B-29 and B-50 Superfortress

Although the Boeing bomber family lineage is obvious at first glance, the B-50 would share only a 25% parts commonality with the B-29.

The B-50 was configured with more powerful Pratt & Whitney radial engines than the B-29, a stronger structure, a taller fin, and other improvements. The tail fin could be folded to fit existing USAF hangars.

The B-50 made it maiden flight on June 25, 1947. The first B-50As were delivered in June of 1948 to the Strategic Air Command’s 43d Bombardment Wing, based at Davis-Monthan AFB, Tucson, Arizona.

In B-50D models and later the 7-piece nose cone window used on the B-29 was replaced by a single plastic cone and a flat bombardier’s window, as seen in the graphic below.

One of aviation’s most historical flights involved the B-50 and took place in early 1949, the first non-stop around the world flight.

The B-50 took off from Carswell Air Force base in Fort Worth, Texas on February 26, 1949, and headed east. The Superfortress was under the command of Captain James Gallagher, and featured a crew of 14 men. In addition to three pilots onboard, the flight was double-crewed, with each man being relieved at 4-to-6 hour intervals.

The mission was considered secret, and flight plans disguised the actual route. If the flight was not successful, the Air Force did not want, or need, the negative publicity that would be forthcoming.

The plane was refueled four times during daylight hours in the air by KB-29M tanker planes of the 43rd Air Refueling Squadron. The refueling locations were over the Azores, Saudi Arabia, the Philippines and Hawaii. The KB-29 flew above the B-50 and lowered a cable and drogue, as shown in the Air Force photo below.

The successful circumnavigation of the earth was completed on March 2, 1949. Total travel time was 94 hours and 1 minute, over a distance of 23,452 miles. The average speed was 249 mph.

Once on the ground safely at Carswell, the crew was greeted by Lt. Gen. Curtis LeMay, Air Force Secretary Stuart Symington, Chief of Staff Gen. Hoyt S. Vandenberg, and other dignitaries. When it had become clear that the flight was going to succeed, the media was alerted, and thus reporters and photographers were also on hand for the landing and subsequent ceremonies.

The flight successfully demonstrated to the Soviet Union, and other enemies, that the United States could launch air attacks to any war-zone in the world, and return the planes safely to U.S. bases.

in an accident on August 13, 1950, the aircraft (now named “Kensmen”) lost power in all four engines and crashed southeast of Davis-Monthan AFB in Tucson. The aircraft was not repairable. The fuselage was salvaged and toured as a recruiting exhibit. 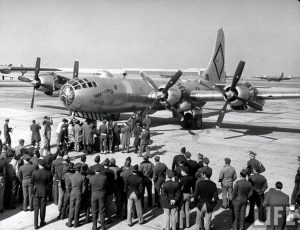 Have a good weekend, enjoy time with family and friends, and Merry Christmas.