Welcome to the 3DB and Happy Friday. Today I want to talk about how American Airlines cracked Pan Am’s monopoly on the North Atlantic routes in to Europe back in the 1950s. As we have discussed previously, Pan Am was the chosen instrument by the US on all international routes; however, there was another player that did manage to crack the code and it was this player that allowed AA to enter the European market. So, who was the player that I speak of – American Export Airlines is the company and below is a brief overview of that company.

Enjoy the photos/ads below and………have a good weekend, enjoy time with family and friends, and remember life is short…..too short. 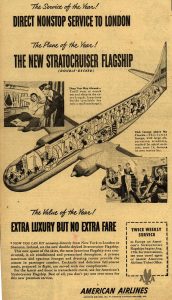