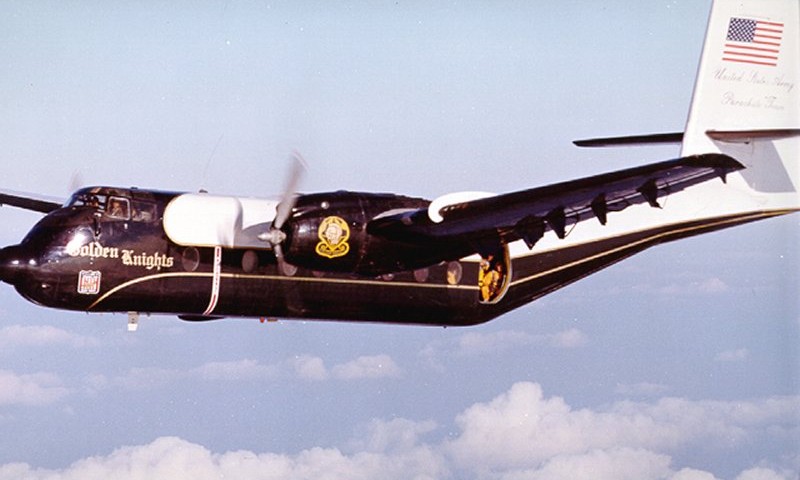 Christmas has come and gone again and now it is time to prepare for the New Year…..again. Time is passing much to quickly for me but I think this is normal for everyone after they pass the age of 40. So much to do and so little time as they say in that place called “Wonderland.”

This week I want to talk about the de Havilland Caribou. I posted an article a few weeks ago that highlighted the role of the Shorts 330/360 for the Army and in the article I mentioned that the Caribou was replaced by the Shorts Brothers Aircraft. This is true to a degree but after the Air Force demanded that the Army turn over their Caribous to them the Army needed something to fill the void and the only thing out there that was cheap, and readily available, was the Short Brothers 330/360. This was not a STOL airplane but the Army made do and moved ahead with the replacement program and the rest of that story you know about. The Caribou was used successfully by the Army, the Canadian Military, bush pilots, and Air America in Vietnam/Laos/Cambodia.

The Caribou was first flown in 1958 as the DHC-4A, and the US Army acquired the CV-2 Caribou the following year. Starting with the U-6A Beaver — which was designed as a “bush pilot’s dream,” and progressing to the reliable, but somewhat clumsy Otter — the Caribou seemed a natural to those Army planners who saw a significant gap between the Army’s organic capability and the C-130 Air Force transport. Initially procuring 173 in 1959, the De Havilland Caribou was the largest Army fixed-wing aircraft. Initially designated AC-1, the aircraft was redesignated CV-2 in 1962 and retained that designation for the remainder of its Army career. When responsibility for all fixed-wing tactical transports was transferred to the U.S. Air Force, the Caribou received the designation C-7.

Two piston engines are mounted in the wings’ leading edges, and the engine nacelles extend beyond leading edges. Powered by two Pratt & Whitney engines of 1,450 hp each, it cruised at 149 knots with a service ceiling of 27,500 ft. It is designed to take off and clear a 50-foot obstacle in a distance of 1040 feet with zero wind. With a 20-mile headwind, the takeoff distance over a 50-foot obstacle is just 460 feet. Its landing distance is just over 590 feet while clearing a 50-foot obstacle. These characteristics enabled the Caribou to operate out of tiny jungle landing strips, from beachheads, or from improvised military landing strips as short as 850 feet. The wings are high-mounted with straight leading edge and forward-tapered trailing edge from engines to the blunt tips. The fuselage is slab-sided with a solid, rounded nose and stepped cockpit. The tail flats are mid- to low-mounted on the tail fin and tapered with blunt tips. The large fin is tapered with blunt tip.

The Caribou was the second exception by the Secretary of Defense to his memorandum on the weight limitations for Army fixed-wing aircraft. In 1951 an Army-Air Force memorandum of understanding (MOU) allowed 2 exceptions on weight limitations: OV-1 [AO-1] Mohawk Medium Observation Aircraft and AC-1 [CV-2] CV-2 Caribou Medium Tactical Transport (MTT). In the early 1960’s the Caribou and the Mohawk were the two major symbols of Army-Air Force disagreement. The CV-2 was to bridge the gap between the US Air Force (USAF) C-130 and Army capabilities. Its very size threw down a gantlet to the Air Force strategists. It could carry as much as the venerable C-47 and land and take off of remarkably short unimproved airstrips. It had a rear end loading door which facilitated rapid cargo handling and was relatively easy to maintain and operate. The Air Force saw this 32 passenger aircraft as a second invasion of its domain and the projected rise of the Army’s inventory at a time that the Air Force aircraft inventory was declining was bound to cause more heat than light.

The Caribou proved to be an extremely useful addition to the United States aircraft inventory and did yeoman service in Vietnam. A not-well-known fact is that the Caribou airplane predated the major helicopter commitment to Vietnam by five months. On 21 August 1961, an experimental “Y model” Caribou landed at Saigon under the auspices of the Advanced Research Project Agency. The Advanced Research Project Agency had its own charter to test almost any device, technique, or prototype that it felt might have application in our counter-insurgency efforts. Consequently, the Agency was able to cut through the red tape of Service disagreements and expedite those tests it deemed appropriate.

The Army ferried the CV-2s to Vietnam in 1962 where their excellent short-field performance and 3-ton payload served as a tactical transport airplane. The Caribou flew up and down the length of Vietnam going into airstrips normally limited to much smaller aircraft such as the O-1 or U-6 Beaver. Initially it specialized in resupply of Special Forces outposts that were in accessible by road and that normally were supplied by either air drop or an occasional helicopter. The Army Caribou pilots took justifiable pride in their proficiency at bringing this big twin-engine airplane into the shortest possible strip. Even the old Southeast Asia hands of “Air America” were impressed when this lumbering bird made its unbelievably slow, steep approach into some of the primitive airstrips.

The Caribou filled a serious gap in the United States inventory. Its short field characteristics, pay load, and light “footprint” made it an ideal aircraft in the counter-insurgency environment. The next plane in size was the C-123B which had a gross weight of 55,700 pounds compared to the Caribou’s 28,500 pounds, and the single wheel load of the C-123 was almost double that of the Caribou. Consequently, the Caribou could operate repeatedly and routinely into airfields that were denied to the C-123 and later the C-130.

The very existence of the Caribou in the Army inventory changed one Air Force program-the Fairchild C-123 “Provider.” This latter aircraft was scheduled to be phased out of the active Air Force inventory in 1961, with a few programmed to the reserves and the remainder to be declared surplus. When Secretary of Defense Robert S. McNamara suggested that the Air Force turn over the C-123’s to the Army (to train on this type aircraft prior to the receipt of the Caribou) , the Air Force suddenly discovered new and pressing Air Force requirements for the C-123. Thus the Army Caribou protagonists not only pushed the Caribou into being, but-incidentally-saved the C-123 for much-needed duty in Vietnam.

The Army traded the Caribou for an end to all restrictions on helicopters. It is for this reason, many consider the Caribou to be the most significant aircraft in Army Aviation history.

The Army kept several prototypes, Tail #59-3079 being the fifth prototype. The yellow and white paint scheme represents the Golden Knights colors, the Army’s Parachute Team, who used this plane from 1973 to 1985.

The Caribou went out of production because it was replaced by the “DHC-5 Buffalo”, a stretched and turboprop-powered derivative of the Caribou — in fact, it was originally known as the “Caribou II”, with the original Caribou prototype fitted with turboprops as a prototype, performing its initial flight on 22 September 1961. Development was funded by a collaboration of the US Army and the Canadian government, with DHC also contributing funding.

Four evaluation machines were ordered by the US Army, with the first taking to the air on 9 April 1964. While the Army initially wanted to give the Buffalo the designation of “YAC-2”, by the time the service got its hands on the machines, the 1962 redesignation effort had taken place, and so they were known by the designation of “CV-7A”.

The Buffalo looked generally like the Caribou, except for the turboprop powerplants; a tee tail; a reprofiled wing with slightly greater span; and a fuselage stretch of about 10%. The DHC-5 was powered by General Electric (GE) T64-GE-10 turboprops providing 2,135 ekW (2,850 EHP). Payload was 41 troops; 35 paratroops; 24 litters and six seated casualties or attendants; or 4,820 kilograms (10,630 pounds) of cargo.

The US Army evaluated the Buffalo in Vietnam, but there were no further US orders. The Buffalos were passed on to the Air Force in 1967 along with the Caribous, with the Air Force designating the Caribous “C-8A”. They were used mostly in test and trials by other US government agencies.  Apparently political pressure to “buy American” and USAF disinterest in the type played roles in not following up the initial evaluation buy.

There were a number of experimental conversions of the DHC-5. One DHC-5, originally obtained by Canadian Forces as a CC-115, was used as a trials platform by organizations in Canada and the US, being initially handed over to Bell Aerospace in Buffalo, New York, in 1971. The aircraft was fitted with a hovercraft-like “Air Cushion Landing System (ACLS)” under a joint US-Canadian contract. The ACLS Buffalo could not only land on any level terrain, it could come down on water, being fitted with wingtip floats like those on a flying boat to keep the wingtips from splashing in. It retained its original landing gear to complement the air cushion landing system.

This machine performed its first flight as the ACLS testbed in the spring of 1975, continuing trials with the USAF at Wright-Patterson Air Force Base in Ohio until 1979, when it was handed back to Canada. It was converted back to normal CC-115 configuration and, at last notice, was still in use in the SAR role. Aircraft air cushion landing systems have been considered for a long time, but despite their clear advantages nobody’s ever adopted an aircraft fitted with such a scheme for service, probably because of the complexity.

* The US National Aeronautics & Space Administration (NASA) Ames Center performed two conversions of C-8As as experimental “XC-8A” machines — some sources hint they were the same machine in different guises, but there’s a photo of the two in flight together so clearly they were different. 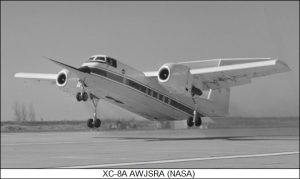 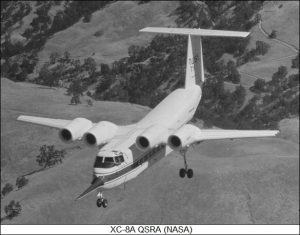 The Caribou, or “BOU” as it was called, was the right airplane for its time and has a proud history of accomplishments. Take some time to look back at how other agencies used the airplane and you will uncover a number of interesting stories that have long been forgotten.

Have a good weekend, keep family and friends close, and be safe/fly safe.