Today we will once again talk about the “Mystery Lady” that was located at Evergreen’s museum in McMinnville; however, some of the facts I will detail today cannot be confirmed absolutely. I think that over the years, because of this airplane’s involvement in numerous black operations, the comment, “admit nothing, deny everything, and make counter accusations,” has become status quo for any and all question regarding the “Mystery Lady.”

Now, a brief history of the Mystery Lady………

It appears that this airplane originally was owned by Air Asia, Air America, or Civil Air Transport and was used for various purposes. After being transferred to Intermountain Aviation the airplane was used for numerous things, which we talked about in the two articles previous to this one, before being given to the Bureau of Land Management to be used as a water/flame retardant bomber on forest fires in the western U.S. and Alaska.

Evergreen Air and Space Museum acquired the aircraft, restored it, and it is now available for all to see, touch and enjoy. Below is a brief description of the “Mystery Lady” from the museum’s website:

Evergreen’s B-17 was a G-model built by either Lockheed-Vega or Douglas in early 1945 and never made it into combat, but rather it served in various utility roles until the mid-1950s.  At that point, her story gets interesting as she was selected for “secret duties” and removed from the Air Force’s inventory. One of a group of five black-painted Flying Fortresses used by the Central Intelligence Agency (CIA), it operated out of Taiwan, where it was used to drop agents into China or support guerilla operations.

Because the serial numbers painted on the tails were changed regularly to confuse the casual observer, her real one has been lost to history.  However, in September 1960, she gained the civilian registration number N809Z when she was sold to Atlantic-General Enterprises; a CIA front company.  From there she went to work for Intermountain Airways in Marana, Arizona in 1962.

Intermountain (also with CIA ties) was well known for modifying aircraft for use in specialized operations and the B-17G was no different.  Outfitted with a special rig on the nose called a Fulton Skyhook and a special hatch in the tail, the Fortress was actually able to pick up people from the ground without landing!  The user on the ground would release a helium balloon trailing a long cable that was attached to a special harness he wore.  The aircraft would then catch the line using long, whisker-like poles on the nose, and snatch the person off the ground where they would be winched up and into the plane.  In 1962, the Skyhook equipped Fortress was called upon to fly a mission deep into the arctic to grab vital information out from under the noses of the Soviet Union.

After her work with the Fulton Skyhook, N809Z was converted into a flying tanker used by Intermountain Airways to fight forest fires in the western US. She was acquired by Evergreen Helicopters in 1975, and given a new registration; N207EV, which she wears to this day.  After 10 years of fighting fires, work began in 1985 to restore the venerable Flying Fortress was back to the war-time configuration with all of the gun turrets and a working bomb bay.  (The story is told that her rare nose turret was found as a decoration in a bar, but the owner was unwilling to sell it, so Evergreen bought the bar, removed the turret, and then re-sold the bar.)  The proudly restored B-17 took to the air again in 1990 and flew in numerous air shows until 2001 when concerns about the wing spar attachment points grounded her.

One of the more interesting operations for this airplane was the “Tibetan Operation” and I have a link below that will take you to a PDF document that covers, in detail, the specifics of that campaign. Also, the photo below is of the Dali Lama escaping to India, circa 1959, after learning that the Chinese had intentions of imprisoning him in China. 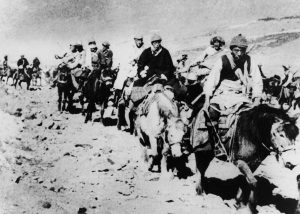 Have a good weekend, keep friends and family close, and fly safe/be safe.