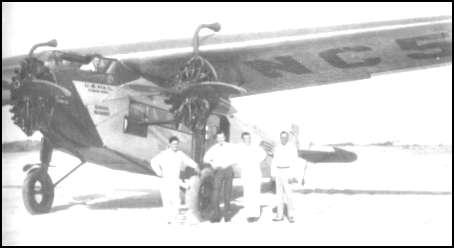 Last week we talked about how Aeromarine was actually the first airline to provide international passenger/airmail service and this week I want to finish up that story by talking about the Aeromarine pilot who made the very first flight for Pan Am – Captain Edwin C Musick. The picture above is of Captain Musick and the airplane he flew on Pan Am’s first flight; however, before we move forward with the specifics I want to share the narrative below which describes that first Pan Am flight:

He liked Juan Trippe’s the best of all. Trippe had organized a company known as Pan American Airways. For two years he had tried in vain to interest the government in the idea of a foreign air-mail service. Finally he had persuaded his friends in Wall Street and in the aviation industry to finance his project. The first step was to be an airline hook-up between the United States and Cuba.

They had arranged for an inaugural ceremony in Havana to be headed by General Machad, President of Cuba. When Captain Musick opened the throttles the morning of the flight at 8:30, he had nearly a ton of mail aboard.

He set a course for Havana. For half an hour the weather was clear. Then he began to run into rain squalls. He dodged the worst ones, only to find the Cuban coast obscured by a far-reaching downpour. Morro Castle shot past, barely visible through the heavy rain. He scraped across the roofs of Havana on his way to Camp Columbia Airdrome. Anxiously he peered through the blurred windshield, striving to locate the field.

The government party, waiting in the big hangar, included several Cuban aviators. They assured President Machado that it was impossible to fly in such a cloud-burst. He was preparing to leave the field when from overhead came the roar of airplane motors. Everyone rushed to the windows. Nothing could be seen of the plane. The sound of the motors died. It burst forth again as the Fokker landed, and taxied across the sodden field.

The crowd broke into cheers as the dripping ship was hauled into the hangar.

In sonorous accents President Machado proclaimed Cuba’s gratification in this new tie which would bind her closer to her great sister republic to the north..

There are many interesting facts surrounding the life of Captain Musick and I have written articles in the past on those events. So, let’s take a look at what I wrote in 2012: Good Morning—Today I have for you an interesting conclusion to my story from last week that will provide real insight in to what I referred to as the rest of the story.

The gentleman pictured above, on the left, standing on the dock is Edwin Musick. He is standing by an Aeromarine seaplane and was a pilot for Aeromarine until they ceased operation in 1924. In the other picture above, on the right, showing the China Clipper on the first proving flight across the Pacific is Captain Edwin Musick as he climbs out of the S-42.

So, as we have seen, the Colombians were the ones that helped bring Pan Am to life — thank you Colombia —  and Aeromarine provided Pan Am with many of the people, and expertise, to begin their journey to greatness….……..interesting to say the least and as I said in the title of the blog – now we know, “The Rest of the Story.”

Click HERE for the complete biography of Captain Musick and take a look at some of the other links you will find on this page – well worth your time. Enjoy the video below, and I recommend the book “From Crate to Clipper with Captain Musick,” if you can find a copy, first published in 1939.

Have a good weekend, enjoy time with family and friends, and fly safe/be safe.