The Spruce Goose and Howard Hughes…It was a fight from start to finish and I am not sure it really ever finished but for sure everyone involved with this program made history. 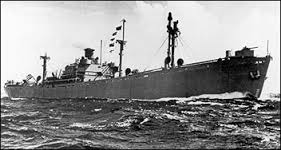 Now I know that you may be a bit confused with my posting a picture of a Liberty Ship but there is a good reason for that. Most historians, remember this comment as we move forward, will tell you that the Goose was not the brainchild of Howard Hughes. The man who put the concept of the Goose on the table was Henry Kaiser – the man who made the “Liberty Ships” for the war effort. (I will have a few statistics on Liberty Ships and a video at the conclusion of this article.)

Now it may seem a little strange that a ship builder suddenly wanted to build airplanes but this was not his plan. Henry Kaiser was going to have Howard Hughes build his brainchild. Now, you know why the original designation of the Goose was HK-1 – H is for Hughes and K is for Kaiser; however, the final designation of the Goose was H-4 after Kaiser pulled out of the project and Hughes put his reputation, and money, on the line to prove his critics wrong.

The geographic isolation of the US was an advantage, reference keeping the war off our shores, during the Second World War, but this also led to logistic problems with ferrying men and machines to war theaters. Henry Kaiser, a civil engineer who had a habit of thinking big, was building Liberty Ships and had an idea for a large flying boat, which would avoid the U-boat menace in the North Atlantic. He approached Howard Hughes to build the huge craft, which would be called the HK-1.

OK, so now we know the rest of the story about the concept, and design, and the man/men responsible for bringing the Goose to life. So, let’s talk about what happened after that historic flight we are all familiar with.

What happened to the Goose after the first/last flight is a story all to itself. The number of people involved maintaining the airplane, the modifications that Hughes ordered performed, and his constant expectations that he was going to fly the airplane again will be covered in another blog post some time in the near future….. Stand-by for the rest of the story

Before I wrap it up I wanted to give you a brief overview on “Liberty Ships” which will help everyone better understand why Uncle Sam was looking for a boat with wings.