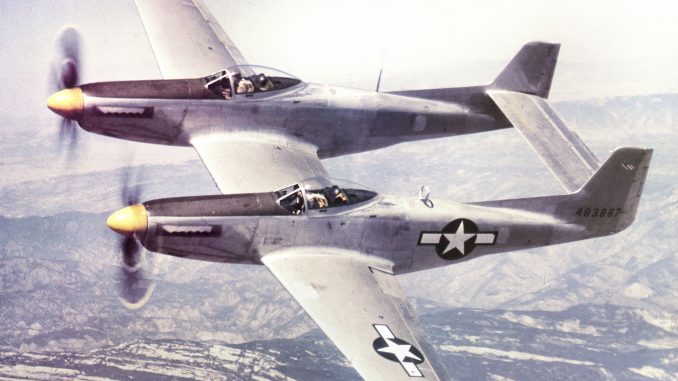 The Xp-82 was an adaptation of the infamous Mustang fighter, that everyone is familiar with, and was brought to life based on a need, and at the request, of Hap Arnold who wanted a long range escort for his B-29s. There were only around 200 of these produced and they were quickly replaced by jet engine fighters not long after production started. Below is a brief history as well as a brief video on a restoration project that will bring one of these iconic fighters back to life.

Once the standard long-range, high-altitude escort fighter for the U.S. Air Force, the North American Aviation P-82 Twin Mustang was the climax of a long series of the famous World War II P-51 Mustang series.

North American produced 250 of the double-fuselage airplanes for the Air Force, embracing three versions of the Twin Mustang then in service, the P-82E, P-82F and P-82G. They were ordered too late for World War II, however.

With a speed of more than 475 mph (764 kph), the Twin Mustang had a combat range of more than 1,600 miles (2,574 kilometers) with full armament. Range could be extended by use of external drop tanks on the wings.

A radical departure from the conventional single-fuselage airplane, the Twin Mustang was formed by two fuselages joined by the wing and the horizontal stabilizer. With a pilot in each fuselage, it reduced the problem of pilot fatigue on ultra-long-range missions. The P-82F and G models carried a radar operator in the right cockpit instead of a co-pilot.

Both engine throttles and both propellers were controllable from either cockpit by manually operated levers. The pilot’s cockpit on the left contained the normal flight and engine instruments, while the co-pilot on the right had sufficient instruments for relief and emergency operation. A simplified cockpit arrangement improved pilot comfort, including a tilting, adjustable seat to reduce fatigue during long flights.

Enjoy the weekend, enjoy your time away from work, and fly safe/be safe.