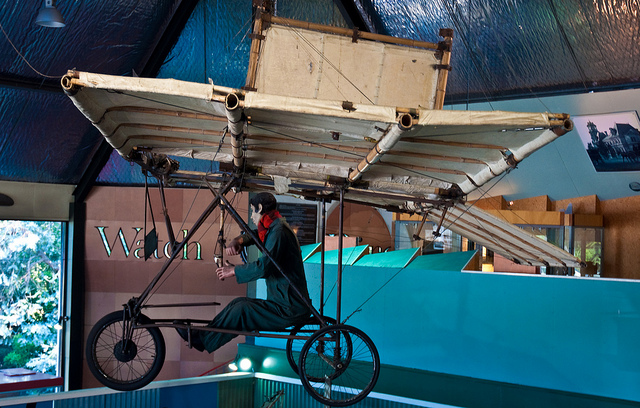 I hope all is well with you, and yours, and I must admit that it has been a busy week here at the 3DB and I am ready, perhaps like you, for the weekend, ready for some quiet time, and ready for a few adult beverages.

My first exposure to Richard Pearse was last November when a friend, who is married to a lovely lady from New Zealand, told me of the accomplishments of the man down under. So, I did a little bit of research and was very surprised at what I found. I have copied an article from the web that details the specifics of this man’s life, and this is followed a list of items that historians have credited to our pioneer.

Yet this farmer’s son, growing up and living far removed from the rest of the world, dedicated his lifetime’s energies to inventing things mechanical including the designing and building of a suitable combustion engine and three aircraft, in the first of which he would make a number of short pioneering flights.

The years 1902/1903 date his achieving the world’s very first mechanically powered flight(s). Dating suggest a first flight on 31st March 1903 – the day before April fool’s day. Corroborated eyewitness accounts from school children at the time and in their 70/80s when interviewed, together with other somewhat conclusive evidence from the local school records, confirm that at least one of his powered flights took place on 31st March 1903. And there were numerous other trials taking place both before and after that. His most active flying year was obviously 1903.

Usually Pearse taxied and ‘flew’ his aircraft using his own, or a neighbor’s, paddock. However if the paddocks were wet this made such use impossible, and Pearse would use the road running past the school and his farm.

There is also other evidence pointing to him flying in the winter of 1903 – specifically on the 10th of July 1903 – just a few months before the Wrights’ first flight. (Note: the seasons are reversed in the Southern Hemisphere). Apparently the plane ‘landed’ on top of one of the many 12ft. high, mainly uncut, box-thorn or gorse hedges surrounding the paddocks in the neighborhood. He then left it there because of a heavy fall of snow. Meteorological records for that time show that snow fell on the 11th of July 1903, but that there was no snow during any of the years immediately before or after that date.

However it was some fifty years later that investigators were alerted to Pearse’s flying activities by the discovery of a roughly constructed ‘utility’ airplane, his third, which never flew but which contained remarkably innovative features, which was found hidden in his work shed after he had died.

In 1974 the NZBC was involved in the making of a documentary film entitled “Richard Pearse.” While this turned out to be rather less than the hoped for historic record, it did serve to bring Pearse’s achievements to the attention of the NZ populace at large. For one scene some shaft-horses were supposed to tow Pearse’s first aircraft into a position for a simulated take-off using the replica. Unfortunately however one of the animals stamped heavily on the foot of the actor leading them and then galloped off across the paddock, fortunately straight into a 10 mph wind. Whilst everyone watched in horror the replica took off quite normally and rose as far as the towrope would allow. It then stalled and nose-dived into the ground. The stability was remarkable and it lifted off with no tendency to roll. Luckily its bamboo frame was resilient and little actual damage was done. During this episode, which was watched by a number of spectators including four professional cameramen and five or six amateurs all of whom had packed away their cameras; thus the most spectacular event of that day went unrecorded!

Have a good weekend, take care, and enjoy time with family and friends.