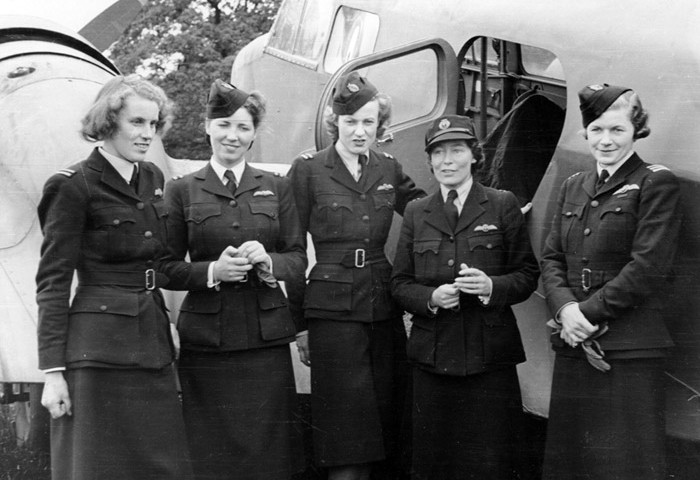 I hope the New Year is everything you hoped for and all is well with you and yours. This week we want to talk about the ATA which is a British organization that rivals the accomplishments of the WASPs; however, since the British were drawn into World War II long before the US their accomplishments went unnoticed to most.

The Women’s RAF – In World War II Britain, a new group of pilots answered the call to serve.

Years ahead of the United States in recruiting women to fly military aircraft from factory to base, the United Kingdom was also—decades later—a year ahead in awarding them medals for their efforts. When the accolades finally came, government officials in both countries called their missions crucial to achieving victory in World War II.

For the United Kingdom, the effort began in 1938, when Sir Gerard John Regis Leo d’Erlanger, a member of a renowned banking family and an accomplished pilot, became convinced that Great Britain urgently needed the help of its amateur pilots to wage a war he saw coming. He wrote to Air Ministry officials suggesting that Royal Air Force pilots could better focus their efforts on combat and defense if non-military pilots aided in the delivery of light aircraft, mail, and light supplies. His plan: recruit pilots who were ineligible for the RAF for one reason or another, such as being too old, color-blind, having a single arm or, in one case, a single eye.

D’Erlanger’s idea drew only lukewarm interest, but when Germany invaded Poland on September 1, 1939, the plan was suddenly taken seriously. D’Erlanger was by then the director of British Airways, so the company was asked to oversee the initiative. Letters were sent to about 1,000 male pilots asking if they wanted to serve their country by ferrying airplanes. About 100 replies came back, and after interviews and flight tests, the first 30 men were picked that September for what became the Air Transport Auxiliary, or ATA (which d’Erlanger joked stood for Ancient and Tattered Airmen). But what was most unusual—even radical—was the decision two months later to satisfy the increasing demand for ferry services by including female pilots. It was the first time in British history that women were hired to fly military aircraft.

Women, of course, had already shown that they could be skilled and daring aviators. In the 1930s, England’s Amy Johnson became the first woman to fly solo from England to Australia and set record times flying her de Havilland Puss Moth from London to both Tokyo and Cape Town, South Africa. In the United States, Louise Thaden and copilot Blanche Noyes won the 1936 Bendix Trophy race in the first year women were allowed to compete with men. But the demands of World War II caused the ranks of female pilots to swell on both sides of the ocean. (The Soviet Union, which had a tradition of enlisting women in combat, had all-female fighter and bomber squadrons; in Germany, women served as test pilots.)

Pauline Gower, daughter of a parliamentarian, Sir Robert Gower, was asked to organize the ATA’s women’s division. As a girl, Gower had been a star pupil at the Convent of the Sacred Heart in Tunbridge Wells, England. She was, according to Giles Whittell, author of Spitfire Women of World War II, the Mother Superior’s pet: “bright, bouncy, diligent and fizzy with ideas.” But at 17 she contracted an infection and underwent surgery that left her unable to participate in activities that required physical strength. Being in the cockpit, writes Whittell, was for her “the perfect, sedentary occupation.” By the time Gower took over at the ATA, she was a commercial pilot with about 2,000 flying hours and a commissioner in the Civil Air Guard.

In January 1940, Gower was given the authority to recruit eight experienced female pilots to transport two-seat Tiger Moth trainers from the de Havilland factory in Hatfield, north of London, to bases in the United Kingdom. The team members came from a wide range of backgrounds: Rosemary Rees was a former ballet dancer; Mona Friedlander, an international ice hockey player; and Winifred Crossley, the daughter of a doctor. Marian Wilberface was a pilot with her own Gipsy Moth. Joan Hughes had been Britain’s youngest pilot; she started flying at 15, before age restrictions were established. Margaret Cunnison and Gabrielle Patterson were both flight instructors (the first woman to instruct, Patterson also was a member of the National Women’s Air Reserve, a group that provided aid in national emergencies).

Some of the later recruits, such as Diana Barnato Walker, came from privileged backgrounds. Heiress to the DeBeers mining fortune, Walker grew up riding horses and attending lavish parties hosted by her father, race-car driver Woolf Barnato. At her debutante ball, she was introduced to the Prince of Wales, and for her 21st birthday, she got a Bentley. In her 2003 memoir, Spreading My Wings, she recounts that she took up flying mainly to escape the constant scrutiny of the “nannies, governesses, companions, and chaperones.” In the cockpit, they “wouldn’t be able to come along.”

One recruit, Molly Rose, had taken her first flight from her own back yard. One of her older brothers, Arthur, had learned to fly at Cambridge and used the fields behind their house to take off and land his Tiger Moth. Sometimes he would ask Rose to join him. “I remember how cold it was,” she says, “but when your big brother invites you on a flight, you don’t run back to the house to get a cardigan!” When she was almost 17, Arthur offered her flying lessons at a flight school he had opened in 1926 at the Aerodrome in Cambridge. She got her pilot license the same year she got her driver’s license. After a stint in a Paris finishing school, she returned to airplanes and became an apprentice engineer. In 1942, the call came from the government to join the ATA.

Even though Rose knew how to fly, ATA instructors gave her extensive training, teaching her to fly light twin-engine airplanes, like the Airspeed Oxford and the Avro Anson, as well as heavy twins, like the Lockheed Hudson light bomber. “That one needed an engineer to help with the landing gear,” Rose recalls. The Supermarine Spitfire was her favorite because of its maneuverability. “It was a thrilling moment,” she said. “The takeoff was fairly easy. And then suddenly you were up in the air and the sky was all yours.”

Was she ever scared? “When you are 21 or 22, you feel very capable, very sure of yourself,” she says. “You think you know all the answers and if you think you know the answers, you simply get on with the job. I don’t like the over-glamourization of what we did back then. It was a job, and we did it as well as we could. But everyone was doing their part for the war. Ours was just a more interesting job than most.”

I am always amazed at how so few can contribute so much and go unnoticed. There are many stories that run parallel to the accomplishments of the ATA, and the WASP, so take some time to explore the past.

Have a good weekend, keep family and friends close, and be safe. Life is short, and can be even shorter, when we believe ourselves to be invincible.