Who Actually Conceived Of Building The Spruce Goose and Who Designed/Built It? – October 21, 2016 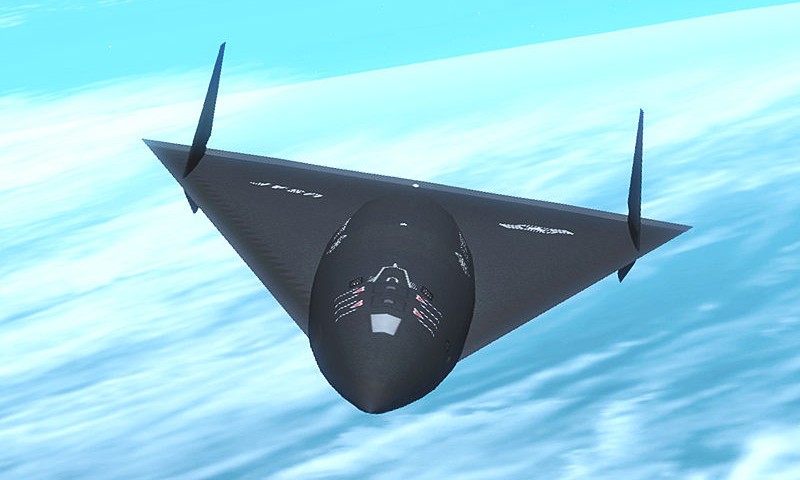 Last week we talked about the “Skonk Works” and this week I want to reprint an article that plays well with that topic. The airplane is called the Aurora and as is typical of such projects the players involved will admit nothing, they deny everything, and then make counter accusations. Aurora also known as SR-91 Aurora is the popular name for a hypothesized American reconnaissance aircraft, believed by some to be capable of hypersonic flight at speeds of Mach 5+.  According to the hypothesis, Aurora was developed in the 1980s or 1990s as a replacement for the aging and expensive SR-71 Blackbird.

A British Ministry of Defense report released in May 2006 refers to USAF priority plans to produce a Mach 4-6 highly supersonic vehicle, but no conclusive evidence had emerged to confirm the existence of such a project. It was believed by some that the Aurora project was canceled due to a shift from spy-planes to high-tech unmanned aerial vehicles and reconnaissance satellites which can do the same job as a spy plane, but with less risk of casualties.

The main question here is, “Does the US Air Force or America’s intelligence agencies have a secret hypersonic aircraft capable of a Mach 6 performance?” The continually growing evidence suggests that the answer to this question is YES. Perhaps the most well-known instance which provides evidence of such an aircraft’s existence is the sighting of a triangular plane over the North Sea in August 1989 by oil-exploration engineer Chris Gibson. As well as the famous “skyquakes” heard over Los Angeles since the early 1990s, found to be heading for the secret Groom Lake (Area 51) installation in the Nevada desert, numerous other facts provide an understanding of how the aircraft’s technology works. Rumored to exist but routinely denied by U.S. officials, the name of this aircraft is Aurora.

The outside world uses the name Aurora because a censor’s slip let it appear below the SR-71 Blackbird and U-2 in the 1985 Pentagon budget request. Even if this was the actual name of the project, it would have by now been changed after being compromised in such a manner.

The plane’s real name has been kept a secret along with its existence. This is not unfamiliar though, the F-117a stealth fighter was kept a secret for over ten years after its first pre-production test flight. The project is what is technically known as a Special Access Program (SAP). More often, such projects are referred to as “black programs.”

So what was the first sign of the existence of SR-91 Aurora? On 6 March 1990, one of the United States Air Force’s Lockheed SR-71 Blackbird spy planes shattered the official air speed record from Los Angeles to Washington’s Dulles Airport. There, a brief ceremony marked the end of the SR-71′s operational career. Officially, the SR-71 was being retired to save the $200-$300 million a year it cost to operate the fleet. Some reporters were told the plane had been made redundant by sophisticated spy satellites.

But there was one problem, the USAF made no opposition towards the plane’s retirement, and congressional attempts to revive the program were discouraged. Never in the history of the USAF had a program been closed without opposition. Aurora is the missing factor to the silent closure of the SR-71 program.

Testing such a new radical aircraft brings immense costs and inconvenience, not just in the design and development of a prototype aircraft, but also in providing a secret testing place for an aircraft that is obviously different from those the public are aware of.

In 1985, a budgetary weapons procurement document made reference to a top secret multi-billion dollar USAF program called Aurora. Looking into this document, the Washington Post learned unofficially that it was linked to stealth technology, possibly development of the B-2 bomber project. Three years later, the New York Times reported that a hypersonic reconnaissance aircraft with stealth capability was being developed to replace the SR-71 Blackbird.

Sounds: Most of the evidence for Aurora’s existence is anecdotal. Among these tales are the reports of unusual sonic booms above Southern California, dating back to mid and late 1991. On at least five occasions, the booms were recorded by at least 25 of the 220 US Geological Survey sensors across Southern California used to pinpoint earthquake epicenters.

Seismologists estimate that the aircraft were flying at speeds between Mach 3 and 4 and at altitudes of 8 to 10 kilometers. The aircraft’s flight path was in a north north-east direction, consistent with flight paths to secret test ranges in Nevada. Seismologists say that the sonic booms were characteristic of a smaller vehicle than the 37-metre long shuttle orbiter. Neither the shuttle nor NASA’s single SR-71B were operating on the days the booms were registered.

Intercepted radio transmissions add further circumstantial evidence. Radio hobbyists in Southern California have monitored transmissions between Edwards AFB radar control and a high-altitude aircraft using the call sign “Gaspipe.” Controllers were directing the Gaspipe aircraft to a runway at Edwards, using advisories similar to those given space shuttle crews during a landing approach. The monitors recorded two advisories, both transmitted from Edwards to Gaspipe: “You’re at 67,000, 81 miles out” and “Seventy miles out, 36,000, above glide slope.”

Sightings of unidentified high-performance aircraft have been made in the Southwestern United States and, later, in other parts of the United States and in Britain and Europe. Reports from outside the United States are difficult to reconcile with an experimental test program, and make more sense in context of the deployment of an operational aircraft.

In addition to reports of triangular high-performance aircraft, numerous reports mention peculiar contrails consisting of a string of pulses or rings, often referred to as a “string (or chain) of doughnuts”.

Chris Gibson (sometimes incorrectly named in sources as Chris Hudson), 30, was in the Royal Observer Corps aircraft recognition team for 12 years up until 1991. Chris told Jane’s Defense Weekly that while working as an oil-drilling engineer in the North Sea in 1989 he saw a strange wedge-shaped aircraft flying between two conventional F-111 fighter-bombers and a KC-135 Stratotanker.

A simulated depiction often captioned as of Aurora refueling under F-111 escort has been widely circulated. This illustration is a photomontage which was created by Bill Rose, to illustrate an article in a 1995 issue of the U.K magazine Astronomy Now by Bill. It was never intended to be an accurate portrayal of Chris Gibson’s sighting. A second, better image was used in an article by Rose for UFO Magazine. A third version, which almost perfectly depicts the sighting according to Chris Gibson, can be seen in Tim Matthews book UFO Revelations and several U.K. magazines.

Gibson’s report is widely considered to be one of the most reputable sighting reports of what is thought by many to be the Aurora, or at least some other “black” aircraft. It is worth commenting that Chris himself does not claim to have seen Aurora and, befitting a witness of his observer background, would not leap to such a conclusion in the absence of solid information.

The picture gained some cult notoriety when published in the British magazine UFO Encounters which put it on its February 1996 cover with the caption “UFO Escort Picture: We Unveil New Evidence Of This US Cover-Up”. Other UFO magazines reacted more calmly and clearly identified the image as a simulation.

The renowned aviation source, Jane’s Defense Weekly, has added its reputable weight to speculation about Aurora by alleging that the triangular shaped planes have been in service since 1989, after they had analyzed information to hand for about three years. Jane’s editor, Paul Beaver, has said “The evidence has grown overwhelming – all we need now is a photograph to prove that it exists.”

Jane’s analysts believe that the $1 billion aircraft which has now been dubbed Aurora could reach cruising speeds as great as Mach 8 – or 5,280 mph, which was more than 2½ times the official world record. Jane’s technical editor, Bill Sweetman, reported that the so-called “hypersonic” Aurora operates mainly at night and incorporates the latest radar-evading “stealth” technology.

The Pentagon announced in 1990 that it was retiring its supersonic spy plane, the SR-7l Blackbird, and would rely for its future high-altitude surveillance on orbiting satellites. Sweetman, an expert in high-technology aircraft, maintained the Pentagon story about satellite spying was a smokescreen.

A Mach-8 plane would be able to reach any point on the globe in less than three hours. Such a plane, fueled by liquid methane, would be of potentially greater use than high-resolution images from orbiting satellites that can take 24 hours to arrive over the subject, the Jane’s report said.

Sweetman based his conclusions on pieced-together data, including the strange sounds reported above air bases in Nevada and California that were characterized as a “low-frequency, high-amplitude pulsing”, multibillion dollar spending on classified research projects and the Gibson sighting of a wedge-shaped aircraft over the North Sea under fighter-bomber escort.

Sweetman believed the U.S. aerospace giant Lockheed, which produced the F-117 stealth fighter, is the most likely manufacturer of Aurora. “Lockheed’s financial figures have indicated a continuing, large flow of income for ‘classified’ and ‘special mission’ aircraft,” Sweetman reported.

Among the varied claims relating to Aurora are:

– Its primary purpose is long-range reconnaissance, with an unrefueled range of at least 10,000 km.

– As a weapons platform it may have potential for surgical nuclear strike or anti-satellite roles.

– Power plants may be pulsed detonation wave engines (theoretically capable of powering an aircraft towards Mach 10 at over 180,000 feet altitude). These engines have been studied since at least 1993. Laser detonation is posited as a means of maintaining precise control over ignition, which may occur externally, or, more conventionally, in a confined chamber. Alternatively, Aurora may use a combined cyclic engine. The latter could function as an air augmented rocket, a ramjet, a scramjet and a rocket. Methane could serve as fuel, or liquid slush hydrogen, doubling as a structural coolant. Either power plant is possibly capable of producing the unusual doughnut-chain contrails reported in recent years.

– A small squadron of Auroras is rumored to operate from Beale AFB, in California.

– Aurora may have a coating which can be made to change colors, or even render it invisible.

– And finally, the Northrop B-2 stealth bomber is seen by some as an expensive ($22.5 billion development costs) cover-up for development of Aurora, on the basis of suppositions concerning range, speed, stealth and payload disappointments in the production B-2s.

Maybe yes or maybe no – you decide. Have a good week, take care, and fly safe.