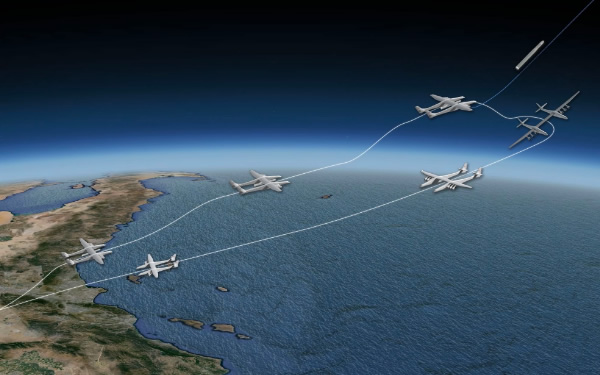 Busy week for me and I hope the weekend will produce some quiet time for all of us so that we can gather our thoughts and be ready for Monday of the new week. Today is a rainy day in Bogota, we have been getting a lot of rain the last two months with flooding problems, so for me it will be a pajama/coffee/research day while I enjoy time with the family.

Today, I want to take you back to a blog I posted a while back on the “Stratolaunch system,” if you don’t recall that blog then clock HERE, and give you a little more information and a few updates. We will start today’s blog with a video of Burt Rutan adding a few insights.

Now let’s talk about the project itself.

The world’s biggest airplane is staying on track to take to the air for the first time by the end of this year, according to Paul Allen, who made billions of dollars as Microsoft’s co-founder and is now spending millions of dollars on the Stratolaunch air-launch system.

Most of the interview was devoted to Allen’s reflections on how computer technology has changed since he and his high-school friends took advantage of the UW’s computer lab on the sly in 1971. But the billionaire entrepreneur and philanthropist also was clear about his commitment to the Stratolaunch project, which was unveiled back in 2011.

The key to the launch system is a twin-fuselage plane that incorporates parts from two Boeing 747 jets, with a wingspan that stretches out to a record-setting 385 feet. That’s twice the wingspan of a 747, and more than the length of a football field.

“It is … I can’t even figure out the right adjective. Is it ‘ginormous’? I don’t know,” Allen joked. “It’s pretty darn big. The tail is 50 feet high, just the tail. It’s probably the biggest carbon-composite vehicle ever constructed.”

Scaled Composites, the company that built the SpaceShipOne rocket plane with Allen’s backing more than a decade ago, is assembling the Stratolaunch plane inside a 103,000-square-foot hangar at California’s Mojave Air and Space Port. “The plane is really coming along,” Allen said. “We’re going to hopefully be flying it later this year.”

After flight testing, Stratolaunch is destined to serve as an air-launch platform. The six-engine plane should be powerful enough to carry rockets weighing hundreds of thousands of pounds up to a high altitude, then drop those rockets to launch payloads into orbit from midair. Orbital ATK has agreed to build the rockets, and there could be other launch partners as well.

“One of the unique things about Stratolaunch is that it doesn’t require a fixed launch pad,” Allen explained. “You can imagine systems that are very flexible for missions where you want to launch satellites at different orbits, from different angles. … Then there’s the fact that just doing an air launch gives you an advantage of probably 30 percent in performance.”

I have one more article, which I found interesting, and a video which I would like to share before I wrap it up and enjoy some down time.

Vulcan Aerospace continues to assemble the world’s largest aircraft at the Mojave Air & Space Port in California, but its builders are remaining mum about the Stratolaunch project’s biggest mystery: What rocket will the air-launch system carry aloft to place satellites into orbit?

At the 32nd Space Symposium in Colorado Springs earlier this month, Stratolaunch Executive Director Chuck Beames said he could not talk about the launch vehicle strategy yet, but he promised a series of announcements over the next year about the program and the company’s “NextSpace” vision.

“At Vulcan Aerospace, my team has spent the last 12 months focused on refining our vision of NextSpace and, of course, making significant progress on our Stratolaunch air-launch platform,” Beames wrote in a blog post on the Vulcan Aerospace website.

“Stratolaunch is making good progress, and remains on target to meet our long-term goal of being fully in service by end of decade,” said Steve Lombardi, manager of corporate communications for Vulcan Inc. “I don’t have anything more specific to share now, but we’ll have more news in the near future.”

The Stratolaunch carrier plane looks a lot like Virgin Galactic’s White Knight Two; both are dual-fuselage aircraft with space for a launch vehicle in between. The main difference between the two is size: the Stratolaunch mothership will have a 385-foot (117 meters) wingspan, weigh as much as 1.2 million lbs. (544,000 kilograms) without the rocket, and be powered by six 747 engines. (For comparison, the wingspan of White Knight Two, which carries Virgin Galactic’s SpaceShip Two into the sky, is 141 feet, or 41 m.)

Stratolaunch was announced in December 2011 as a collaboration between Microsoft co-founder Paul Allen and Scaled Composites founder Burt Rutan, who had teamed up to win the $10 million Ansari X Prize with SpaceShipOne in 2004. Partners in the company included Vulcan, Scaled Composites, Dynetics and SpaceX.

Since that announcement, the company has suffered several delays in building the medium-class launch vehicle. SpaceX, which was adapting Falcon 9 technology for air launches, withdrew from the program in 2012.

“SpaceX was a partner, and like a lot of partnerships, it was just determined that it was best we went our separate ways — different ambitions,” Beames told Spaceflight Insider in 2015. “We were interested in their engines, but Elon and his team, they’re about going to Mars, and we’re just in a different place, and so I think it was a parting of the ways that was amicable.”

Stratolaunch then contracted out its rocket work to Orbital Sciences Corp. (now Orbital ATK). The company also contracted with Aerojet Rocketdyne for six RL10C-1 rocket engines with an option for six more for use in the launch vehicle’s third stage.

The agreement with Orbital ended without the production of a launch vehicle, with Beames saying the rocket was not economical. Stratolaunch officials said they were reassessing the project in light of the shift in the market recently toward smaller satellites.

Beames said the company would announce its launch vehicle strategy in fall 2015, but that time came and went with no announcement.

Stratolaunch has long-term plans to launch crewed spacecraft. Sierra Nevada Corp. has designed a scaled-down version of its Dream Chaser space plane that would be launched aboard a rocket from the carrier aircraft.

However, that vehicle was designed for Orbital’s launch vehicle, which did not go forward. Beames said in 2015 that work on accommodating Dream Chaser had been put on hold due to uncertainty over the launch vehicle to be used in the program.

Have a good weekend, stay safe, and enjoy time with family and friends……life is short.