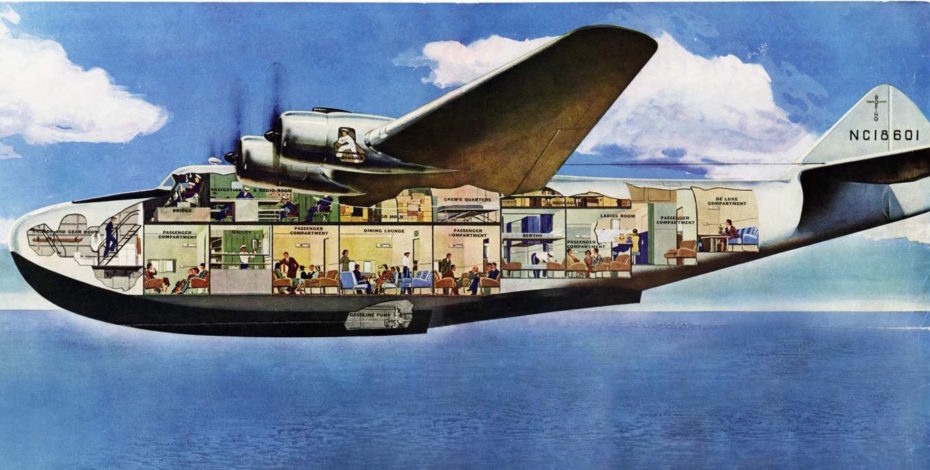 You Frequent-fliers will really appreciate this nostalgic look back in time at the Pan Am Clipper!  Be sure to look at it all. The ‘fate’ of the Pan-Am Clipper was shocking…

The Pan AM Clipper

What It Was Like Aboard A Pan-Am Clipper? Clipper passengers took their meals at real tables, not their seats.  For most travelers in the 21st century, flying is a dreary experience, full of inconvenience, indignity, and discomfort.

That wasn’t the case in the late 1930s, when those with the money to afford trans-oceanic flight got to take the Boeing Model 314, better known as the Clipper. Even Franklin Roosevelt used the plane, celebrating his 61st birthday on board.

Between 1938 and 1941, Boeing built 12 of the jumbo planes for Pan American World Airways.  The Clipper had a range of 3,500 miles, enough to cross either the Atlantic or Pacific, with room for 74 passengers onboard.  Of  course, modern aviation offers an amazing first class experience (and it’s a whole lot safer), but nothing in the air today matches the romanticism of crossing the oceans in the famed Clipper.

The nickname Clipper came from an especially fast type of sailing ship used in the 19th century.  The ship analogy was appropriate, as the Clipper landed on the water, not runways.

The Clipper made its maiden trans-Atlantic voyage on June 28, 1939 but once the US entered World War II, the Clippers were pressed into service to transport materials and personnel.

POSTSCRIPT:   Prior to WWII, the Japanese Military became very interested in the new Pratt & Whitney radial engines  that powered the PanAm Clipper.    On a flight from San Francisco to China, a Clipper landed  on Truk Lagoon to be refueled by Japanese authorities. Later, the Clipper was assumed  lost over the Pacific.   Years later, it was revealed that the crew and passengers were  arrested and executed, the engines were retrieved and sent to Japan and the Clipper  was sunk in deep water off Truk Lagoon.

Have a good weekend and join me next week when we will talk about………..