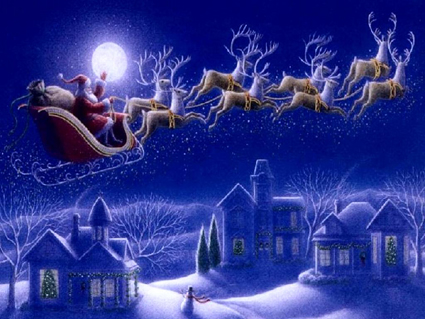 Good Morning —Almost time for Santa to arrive and hopefully everyone is ready for the big day. I will be taking the next two weeks off to enjoy time with the family which means I am going to put away my laptop, and turn off the modem for the internet. I have a few links below for what I believe to be some of the most interesting articles of the recent past as well as I will close with everyone’s favorite Christmas story.

President Kennedy and the SST

The Race to be First

A Living Legend Who Still Has the Right Stuff

The Goose – Part One

The Goose Moves to McMinnville, Oregon

Lindbergh and the Science of Navigation

A retelling of the 19th-century story with a slight spin for Aviators. This has been floating around the Internet for years and was probably passed around as photocopies/Faxes  for years before that.

The Night Before Christmas

The Night Before Christmas, Aviation Style – by Fellow Pilot

“Twas the night before Christmas, and out on the ramp,
Not an airplane was stirring, not even a Champ.
The aircraft were fastened to tiedowns with care,
In hopes — come morning — they’d all still be there.

The fuel trucks were nestled all snug in their spots,
Gusts were two-forty at thirty-nine knots.
I slumped at the fuel desk — at long last caught up —
And then settled down with my cold coffee cup.

When the scanner lit up with noise and the with chatter,
I turned up the volume to see what was the matter.
A vice clearly heard over static and snow
Called for clearance to land at the airport below.

He barked his transmission so lively and quick,
I near missed the call sign he used: “Ol’ St. Nick.”
I ran to the panel and turned up the lights,
To better welcome this magical flight.

He called his position, no room for denial,
“Ol’ St. Nick One, turnin’ left onto final.”
And what to may wondering eyes should appear,
But a Rutan-built sleigh, with eight Rotax Reindeer!

With vectors to final, down the glideslope he came.
As he passed all the fixes, he called them by name;
“Now Ringo! Now Tolga! Now Trini and Bacun!
On Comet! On Cupid!” What pills was he takin’?

While controllers were sittin’ and scratchin’ their heads,
They phoned to my office — I heard it with dread.
The message they left was both urgent and dour;
“When St. Nick pulls in, have him please call the tower.”

He landed like silk, with the sled runners sparking.
Ground said, “Left at Charlie and taxi to parking.”
He slowed to a taxi, then turned off three-oh,
And stopped on the ramp with a “Ho-ho-ho-ho.”

He stepped form the sleigh, but before he could talk,
I ran to meet him with my best set of chocks.
Red Helmet and goggles all covered with frost,
His white beard now blackened from Reindeer exhaust.

His breath smelled like peppermint gone slightly stale,
And he puffed his clay pipe — but he didn’t inhale.
His cheeks were all rosy and jiggled like jelly.
His boots were as black as a crop-duster’s belly.

He was chubby and plump, in his suit of bright red,
And he asked me to “Fill it with hunnert low-lead,”
when he came dashing in from the snow-covered pump,
I knew he was anxious for drainin’ the sump.

I spoke not a word but went straight to my work,
And I filled up the sleigh, when just stared like a jerk.
He strolled from the restroom, he sighed in relief,
Then he picked up a phone for a Flight Service brief.

And I thought, as he silently scribed in his log,
These reindeer could land with on-eighth mile in fog.
He completed his preflight, from front to the rear,
Then he put on his headset, and I heard him yell, “Clear!”

Then laying a finger on his mike’s push-to-talk,
He called up the tower for clearance and squawk.
“Take taxiway Charlie, the southbound direction,
Turn right three-two-zero at pilot’s discretion.”

He dashed down the runway, the best of the best,
“Your traffic’s a Grumman, inbound from the west.”
Then I heard him proclaim, as he climbed through the night,
“Merry Christmas to all! — Nick has traffic in sight!”

Have a Merry Christmas, enjoy some time away from the day-to-day hustle and remember that life is short – enjoy each and every moment.