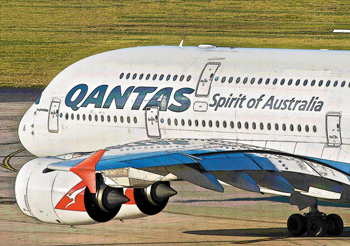 Good Morning and Merry Christmas—today is safety Monday and I want to present an article on the A-380 which suffered an uncontained engine failure; however, before Qantas and the A-380, there was a United flight which experienced a similar problem. UA-232 had a catastrophic failure of the number two engine, lost all of the hydraulics, and landed short of the runway. If you don’t remember this event then CLICK HERE

The crew on the A-380 did an outstanding job of working through the problems, as the article will show, and their actions, as in UA-232, saved the lives of the passengers and the crew.

(An engine oil fire caused a turbine disc to explode and propel large chunks of metal through the A380’s wing.)

An oil pipe that was improperly milled during the manufacture of an Airbus A380’s Rolls-Royce engine developed a fatigue crack that eventually leaked oil, causing a fire inside the no. 2 engine that spurred the violent breakup of a turbine disc as the aircraft departed from Singapore for a flight to Sydney, Australia, the morning of Nov. 4, 2010. Portions of the turbine disc penetrated the engine case and perforated the wing, ripping open a fuel tank and severing large bundles of electrical wiring.

In its final report on the accident, the Australian Transport Safety Bureau (ATSB) commended the Qantas Airways crew for safely returning the crippled aircraft and its 440 passengers to Singapore. “The flight and cabin crew managed the event as a competent team in accordance with standard operating procedures and practices,” the report said.

The uncontained failure occurred in a Rolls-Royce RB211 Trent 972-84 engine. The investigation revealed that “numerous other engines” in the Trent 900 series had the same type of defect — an oil feed stub pipe with a wall section that was thinner than prescribed by the design specification. Investigators found that the discrepancy in the accident aircraft’s engine was not detected or was not reported during manufacture and subsequent inspections.

There were five flight crew members and 24 cabin crewmembers aboard the aircraft when it departed from Singapore’s Changi Airport at 0956 local time. Visual meteorological conditions prevailed in the area.

The primary flight crew was accompanied on the flight deck by two check captains, one of whom was supervising the training of the other pilot in the A380. Both check captains had more than 17,000 flight hours and 800 hours in type.

‘High-Energy Debris’
The aircraft was climbing through 7,000 ft over Batam Island, Indonesia, about four minutes after takeoff, when an oil feed stub pipe in the no. 2 (left inboard) engine’s high-pressure/intermediate-pressure (HP/IP) turbine bearing chamber leaked oil that ignited in the hot chamber.

The resulting fire caused the intermediate-pressure turbine disc to separate from the driveshaft. “The disc accelerated and burst with sufficient force that the engine structure could not contain it, releasing high-energy debris,” the report said.

A large fragment of the turbine disc penetrated the leading edge and the front spar of the left wing, and tore through the left inner fuel tank before exiting the top of the wing. The fragment initiated a flash fire inside the wing tank, and an oil fire occurred in the lower cowling of the no. 2 engine; however, both fires quickly self-extinguished.

The ejected debris damaged several aircraft systems, and that damage in turn affected a number of other systems. “Although some systems sustained direct mechanical damage, most of the affected systems were damaged through debris impact to the respective wire looms,” the report said. “Two main wiring looms were impacted by debris; one running through the leading edge of the left wing and the other in the belly fairing.” About 650 wires were damaged by the debris.

Among the initial messages were: turbine overheat in the no. 2 engine, degraded operation of the no. 1 and no. 4 engines, low pressure and low fluid level in the green hydraulic system, failure of two alternating current electrical buses, and reversion of the automatic flight control system to alternate law. The ECAM also displayed several messages regarding the flight controls, brakes and fuel system.

The first officer declared an urgency with air traffic control (ATC) as the captain selected the autoflight system’s heading- and altitude-hold modes, leveling the aircraft at 7,400 ft. The autothrottles did not adjust engine thrust to maintain 250 kt, as expected, so the captain manually reduced thrust to control airspeed.

“The flight crew discussed the available options to manage the situation, including an immediate return to Singapore, climbing or holding,” the report said. “As the aircraft remained controllable and there was ample fuel on board, it was decided that the best option would be to hold at the present altitude while they processed the ECAM messages and associated procedures.”

Accordingly, the crew requested and received clearance from ATC to hold offshore in a 20-nm (37-km) pattern within 30 nm (56 km) of Changi Airport. “ATC also advised of reports that a number of aircraft components had been found by residents of Batam Island,” the report said.

After establishing the A380 in the holding pattern, the pilots attended to the myriad of messages on the ECAM. “The primary flight crew processed the ECAM messages and followed procedures in accordance with their training,” the report said. “They used other flight crewmembers at opportune times to share tasks not essential to flight safety and gather information to assist in their decision making. This included communication with the cabin [crew] and obtaining information in relation to the damage to the aircraft.”

While performing the procedure prescribed for an engine overheat, the crew shut down the no. 2 engine. During this time, however, the ECAM displayed another message indicating that the engine had failed. As a precaution, the crew discharged both fire-extinguisher bottles; however, due to damaged wiring, only one of the bottles actually discharged.

The second officer went to the cabin to visually assess the damage. A passenger directed his attention to a view on the in-flight entertainment system provided by a tail-mounted camera, which showed a stream of fluid emerging from the left wing. The second officer then went to the main (lower) deck, where he confirmed that fuel was leaking from underneath the wing and also saw some of the damage that had been inflicted on the wing.

While carrying out the procedures associated with the multiple ECAM messages, the crew found that they could not jettison fuel. The crew had begun transferring fuel from the no. 2 engine’s fuel tank as part of the procedure for securing that engine, but they decided to discontinue the transfer due to uncertainty about the integrity of the fuel system.

“It took about 50 minutes for the flight crew to complete all of the initial procedures associated with the ECAM messages,” the report said. Thereafter, they assessed the condition of the systems that normally would be used for landing and found abnormalities including “inoperative wing leading edge lift devices, reduced braking function, reduced number of operational spoilers and inactive left engine thrust reverser,” the report said, noting that only the inboard engines on the A380 are equipped with thrust reversers.

“After some initial difficulty in calculating the landing distance required, due to the high number of system and flight control malfunctions, the fight crew determined that a landing within the distance available on Runway 20C at Changi Airport was achievable,” the report said. The runway was 4,000 m (13,124 ft) long and 60 m (197 ft) wide.

The crew advised ATC of their intention to conduct a long final approach to Runway 20C and requested that emergency services be available on landing. “The captain called the CSM [customer service manager] on the interphone to advise him of the potential for a runway overrun and evacuation, and the CSM and cabin crew prepared the cabin for this possibility,” the report said.

During the approach, the crew conducted controllability tests after each reconfiguration of the aircraft for the landing. “As a result of the damage to the aircraft, extending the landing gear required use of the emergency extension procedure,” the report said.

Have a good week, enjoy time with family and friends, and remember to say Merry Christmas – It doesn’t hurt.