Jack Frye was a founder of the Aero Corporation of California, which became Standard Airlines in 1927, a major airmail transporter.  Standard was consolidated with Western Air Express to form Transcontinental & Western Air (TWA) in 1930.  Frye became president of TWA after his famous letter to aircraft manufacturers calling for the development of a safer, more efficient aircraft. Donald Douglas, as we all know, responded with the DC-1, DC-2, and other DC models which gave TWA an advantage over their competitors.

Under Frye’s leadership, TWA was known as a “pilot’s airline”.  He took the lead in exploring high-speed, high-altitude, all weather flying.  This research led to the development of the Boeing 307 “Stratoliner”, the first fully pressurized passenger aircraft.

Negotiations went quickly, and smoothly, with Boeing and on Jan. 29, 1937, TWA ordered five Boeing 307 Stratoliners, with delivery of the first set for Dec. 22, 1938. However, between the time T&WA placed the Stratoliner order and Boeing’s promised delivery date, Frye’s vision clashed with the practicality of TWA’s major stockholder, John Hertz (yellow cab and rental car mogul), who believed the price of the new airplane, which Frye saw as TWA’s future, was too much for the financially strapped airline. The dispute caused problems with the delivery, and the order was cancelled.

Frye then turned to Howard Hughes, who, sensing a major opportunity, surprised onlookers and bought enough shares to gain control of the company. The Stratoliner contract was resurrected in September 1939, and delivery of the pressurized, all-weather airliner was made on May 6, 1940, with the inaugural flight following on July 8, 1940.

Once the Stratoliner situation with Boeing had been settled, Howard Hughes’s vision turned toward more-advanced, larger, and faster airplanes, talking with Frye about future equipment even before the first Stratoliner was delivered. The new airplane would be big—carrying 50 passengers and 6,000 pounds of cargo, it would be fast with over-weather capabilities, it would be luxurious, and it would fly across the continent nonstop. But most importantly, all talk and plans pertaining to it would be highly secret.

Many meetings with Lockheed contacts resulted in an order for 40 Constellations at a cost of $425,000 each to be bought by the Hughes Tool Company, as would be all future aircraft purchases. Announcement of the Constellation program, which had managed to stay a tightly held secret, just a few months before Pearl Harbor caused a sensation within the aviation industry. But TWA was not to immediately reap the rewards of its marvel; war needs prevailed. All Constellations that came off the assembly line were designated C-69s and went into military service.

However, the airline did accept the first Constellation, dressed in TWA livery, and after its acceptance flight, turned it over to the military. The acceptance flight—Burbank to Washington, D.C.—was a record-maker. On April 17, 1944, Hughes and Frye flew the cross-country trip in 6 hours 58 minutes. Although the Constellation was to have given T&WA a healthy 3-year lead over its competitors in operating the highly sophisticated transport, the war eliminated that possibility. Owing to the “Connie’s” transport configuration, the government gave production preference to combat aircraft, so that Lockheed manufactured only half of TWA’s original order for 40. Hughes had contracted to retain buy-back rights from the government, so at the war’s end, a sizable fleet returned to T&WA.

Several events hurt TWA’s operations and precipitated a drop in TWA stock price from $71 a share to $9, along with a loss of $4 million in 1946. The 18 Constellations on order were cancelled. The TWA Board of Directors voted Jack Frye, ever the visionary, out of office. Although the company was experiencing equipment, financial, and labor problems, Frye wanted to buy more Constellations; Hughes and the Board did not. In early 1947, Douglas introduced the DC-6, which proved to be serious competition to the “Connie” fleet. But the next year, TWA placed a new-model Constellation, the L-749, into service.

For 25 years, the elegant, streamlined Connie, with its distinctive triple tail and long fuselage, dominated TWA skies. The airplane underwent much modification, culminating in what has been referred to as the “most luxurious piston aircraft,” the L-1649A. The last TWA Constellation flight, Flight 249, took off from Kennedy Airport at 3:15 p.m. on April 6, 1967. The crew of Capt. Joseph Duncan, First Officer Richard Green, and flight engineer George Martin closed a chapter of TWA aircraft history as TWA prepared for the commercial jet transport. 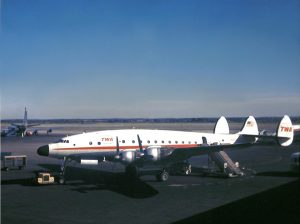 Now, we know how it was really Jack Frye who guided Hughes and made TWA a great airline let’s talk about how Hughes, after Frye’s departure, made the worst possible chess move possible. 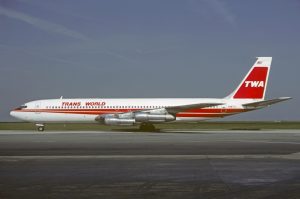 Just as the Douglas series of transports, the Boeing Stratoliner, and the Lockheed Super Constellation had played such vital roles in TWA’s development during the piston-engine era, the jet-engined Boeing 707, 727, and 747, along with the L-1011 and the DC9/MD 80, would become the airline’s vital equipment in years to come. During the 1950s, 1960s, and through the early 1970s, TWA further developed its first-class character for which it will long be remembered. The carrier would acquire airlines and international routes that spanned the globe, its pilots would set many aviation records, and its safety record would be second to none.

But all that was not entirely evident from the Boeing order pad for the first American commercial jet transport, the Boeing 707, which showed 186 aircraft ordered by the nation’s airlines, except for TWA, whose order tallied “0.” This was not for lack of interest. Howard Hughes continued to dominate TWA and its planning and equipment procurement. He was working with Convair to develop a jet larger and faster than the B-707; the deal collapsed at about the same time that his company, Hughes Tool, which bought all of TWA’s airplanes, suffered a serious cash flow problem that was not publicly evident. Ironically, TWA was earning good profits.

Hughes’s resistance to ordering the B-707 wilted; and on March 2, 1956, he allowed an order for eight “domestic” B-707s to be placed; his executives were aghast at the meager number and aircraft type. Ultimately, the order was increased to a total of 33 as of Jan. 10, 1957. On March 20, 1959, TWA inaugurated jet transcontinental service from San Francisco to New York with its single Boeing 707, almost 2 months after American’s B-707 coast-to-coast flight on Jan. 25, 1959. The first TWA B-707 flight over the Atlantic was on Nov. 23, 1959. In that year, TWA experienced its best financial year to date.

The Convair 880 was brought on line in 1960 to supplement the long-range B-707. The CV-880 was faster than either the B-707 or its competitor, the DC-8, and helped TWA pilots set many city-pair speed records. The jets’ voracious thirst for fuel, however, caused TWA to sell them in the early 1970s.

In the meantime, Howard Hughes’s financial problems with Hughes Tool had deteriorated to the point that on Dec. 29, 1960, his financial backers placed his TWA stock (78 percent of all company stock) into a 10-year voting trust, repossessed all the aircraft, and ousted Hughes from control of the airline. By 1965, TWA’s value had zoomed up, and its stock was again in the range of $97 per share. The airline had revenues exceeding $500 million and a profit of $50 million, and paid its first dividend to stockholders in 30 years. Hughes sold his holdings for $550 million and cut his last ties with the airline.

The source document above is one of the primary documents used but there were others. Take some time to look around the web and discover a few more facts for yourself; however, before I wrap it up my story on Jack Frye, and Howard Hughes, I want to share an interesting fact about Jack Frye that is not known by many.

In 1934 President Roosevelt ordered all air mail contracts to be canceled because of airline inefficiency and, in a defiant gesture, Frye flew from Los Angeles, in the new DC-1, to Newark Airport in a record transcontinental time of 13 hours, 4 minutes.  Because of this flight, mail contracts were awarded back to the airlines.

Now we know the rest of the story……….

Have a good weekend, enjoy time away from airplanes, or your office, and remember to keep family and friends close.