It was the first commercial airplane to break the 1,000-sales mark, but it started out as a risky proposition. The 727 was designed to service smaller airports with shorter runways than those used by Boeing 707s. U.S. companies already working to compete in this market included Lockheed, Convair and later Douglas, with what would become the DC-9. Boeing also faced overseas competition from such airplanes as the de Havilland Trident, Sud Aviation Caravelle and British Aircraft Corp. BAC 1-11.

Adding to Boeing’s challenges were conflicting demands from customers: some wanted four engines, another wanted a twin, still others were satisfied with prop planes. Boeing was also still grappling with the startup and production costs of the 707. The decision to go forward on a new commercial plane was a risk that many at Boeing advised against. On Dec. 5, 1960, Boeing announced the three-engine 727, with 40 orders each from launch customers United Airlines and Eastern Air Lines.

Of all the early Boeing jets, the 727 had the most distinctive appearance, with its rakish T-shaped tail and its trio of rear-mounted engines. It carried billions of passengers on everything from short hops to cross-country flights.

The 727 was the first Boeing jetliner to undergo rigorous fatigue testing, the first to have completely powered flight controls, the first to use triple-slotted flaps and the first to have an auxiliary power unit (APU). The APU was a small gas-turbine engine that eliminated the need for ground power or starting equipment in the more primitive airports of developing countries.

Originally, Boeing planned to build 250 of the planes. However, they proved so popular (especially after the larger 727-200 model, which carried up to 189 passengers, was introduced in 1967) that a total of 1,832 were produced at the Renton, Wash., plant. Variants included a convertible passenger-cargo model with a Quick Change (QC) option — seats and galleys attached to removable pallets.

The Birth Of The Boeing 727

The new look of Boeing’s three-engined 727 caused quite a stir when it was unveiled in November 1962, as Aviation Week noted in its extensive coverage in the December 10 edition the following week.

The aircraft’s distinctive T-tail, clustered rear-engined configuration and clean wing were unlike anything seen before from the Boeing stable. The photos accompanying the special, including the cover, therefore focus heavily on these features to illustrate the radical new shape. Our correspondent, David Anderton, also went out of his way to explain in-depth the features of the new wing, in particular the sophisticated high-lift systems that would give the 727 such good field performance.

Yet, for its shockingly different looks, Anderton notes the 727 still retained the “traditional Boeing look,” a notion that was reflected in the use of a common fuselage cross section and Section 41 with the 707. The almost throwaway line belied one of the key aspects of the design, and with it the historical significance of the 727 as the true start of Boeing’s hugely successful strategy of ‘family’ designs.  The idea of developing a series of aircraft to suit vastly different markets, yet sharing common design DNA, was in its infancy in the early 1960s. But the 727, developed for the short-to-medium haul market and 5,000-ft. runways, would prove the immense value of the family concept.

Nobody knew at the time of the roll out just how popular the 727 would become.  Although only produced in just two major body length versions, and never re-engined like the 737, the 727 was for many years Boeing’s best-selling airliner. The trijet was the first Boeing commercial jetliner to exceed 1,000 sales and notched up a grand total of 1,831 orders by the time the final aircraft was delivered in 1984. The 737 did not overtake the 727 in terms of deliveries until 1991, 25 years after the first of the smaller twinjet had been delivered and seven years after production of the 727 had ended.

It is also interesting to note how times change, particularly in areas like environmental performance. Although Boeing designers were obviously aware of the noise issues that came with the low bypass ratio jet engines of the day, the surprising yardstick for improvement –- as mentioned in the article -– were piston-powered airliners of the day, as well as the raucous 707 and 720Bs. “For the community noise level problem Boeing holds out real hope,” says Anderton. “One nautical mile from the end of the runway, the 727 is expected to be making about 109 db., compared with about 110 for a Douglas DC-7C, 112 for a Douglas DC-6B, or 125 for the Boeing 707-120 using water power injection power.”

In a world where airliner flight test programs are comprised of dedicated test aircraft, we also find in this gem of Aviation Week reporting, that the 727 was the first commercial Boeing program to adopt this method as standard practice. “Flight testing of the 707 and 720 series had to be done piecemeal on airplanes made available through the cooperation of customers. Any delays on Boeing’s part generally meant that the incompleted (sic) test installation had to be ripped out and installed in another airplane, again with the customer’s acquiescence. This routine was the despair of the flight test department … the 727 program will not go the same route.”  Fascinating stuff.

There is no mention that I can see of other facts such as the 727 was the first Boeing jetliner to have hydraulically powered flight controls, or that it was the first jet airliner in the world to be fitted with an auxiliary power unit. But read on and enjoy such tidbits as the use of the 707 prototype (the famous Dash 80) to prove the tail-mounted engine location and Anderton’s description of the unseemly looking fifth engine “mounted like a wart on the left rear fuselage.” 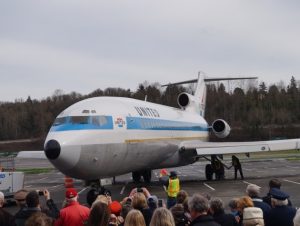 As befits such a significant aircraft, the prototype 727, as seen above, is still around today and preserved at Seattle Museum of Flight Restoration Center at Paine Field, Everett.  Following first flight in Feb 1963, the prototype was used for more than a year in the certification program before delivery to United Air Lines in Oct 1964. Retired in January 1991, it was donated to the museum after it had flown 64,495 hours, 48,057 flights and carried more than three million passengers!

The final flight of the first Boeing 727 prototype jet ever produced was one of the shortest trips it’s made in its 53-year history: a 15-minute jaunt from a restoration hangar at Everett’s Paine Field to Seattle’s Boeing Field and the Museum of Flight.

But in another sense, it took decades to make the journey.

The three-engine jet was used as a test prototype when Boeing started flying the 727s in 1963, and was delivered to United Airlines in 1964. The plane put in nearly 65,000 hours of service with United, and made more than 48,000 takeoffs and landings.

The three-engine jet made its last commercial voyage in 1991, and then United donated it to the Museum of Flight. At the time, the museum couldn’t accommodate the plane in Seattle, so it was put into storage in Everett. Some of its parts were scavenged for other planes.

For 25 years, a volunteer team toiled to raise money, acquire spare parts (mostly donated by FedEx) and refurbish the plane for one more flight. Once the plane was judged airworthy, the Federal Aviation Administration issued a special permit to clear the way for today’s takeoff under visual flight rules.

Pilot Tim Powell, co-pilot Mike Scott and flight engineer Ralph Pascale – all with long experience on 727s – made up the flight crew for the final journey. Retired Boeing engineer Bob Bogash rode along. It was Bogash who led the effort to get the plane donated and refurbished, starting back in the 1980s.

“This journey with this airplane here, to me, is 32 years long,” Bogash told a crowd of hundreds who turned out to see the plane’s last landing. “Even today, in her senior years, she’s still the belle of the ball.”

The jet is painted in the same colors it wore at delivery, with the registration number N7001U emblazoned on its engines. It will be put on temporary display in the Museum of Flight’s Airpark, and this summer it will take its permanent place alongside prototype 737 and 747 jets in a brand-new Aviation Pavilion.

Doug King, the museum’s president and CEO, said the 727 was “the airplane that brought flight to the masses.”

“We’re really proud to have room for this,” King said.

The plane figures prominently in “Growing Up Boeing,” a book written by Rebecca Wallick, the daughter of Boeing test pilot Lew Wallick. The elder Wallick, who passed away in 2009 at the age of 85, was the pilot for the 727 prototype’s first flight.

Have a good weekend, fly safe/be safe, and remember to keep our history alive…….Things around us are changing quickly and, as always, history becomes an obscure memory as people become disconnected with their past while dealing with day-to-day events.