The Man Who Made Powered Flight Possible - August 8, 2014

The Man Who Made Powered Flight Possible – August 8, 2014 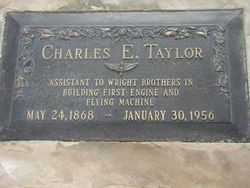 Good Morning and Welcome to the 3DB. I hope the week was not too taxing on your spirit and you are ready for a little R&R (rest and relaxation). This week I had planned to present Part Four of the Goose, which has about 25 pictures detailing the move from Long Beach to McMinnville, but the new blog is still not ready; however, it appears that next week I will be up and running so le’s plan for Part Four then.

This week I want to present a blog, that I post about every 90 days, to remind people that there was a third person involved with the first powered flight and his name was Charles Taylor. I am always amazed at how many people are left behind by history so in an effort to right a wrong I continue to remind people of Charlie’s story.

There were several other major accomplishments in Charley’s career, that I will list at the conclusion of my story, but for now I want tell you how this forgotten pioneer of aviation faded into obscurity and died a lonely man.