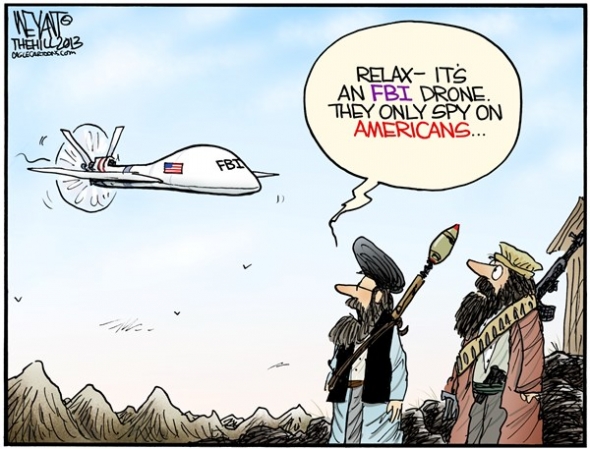 Good Morning and Happy Friday—-The New Year is well underway and I hope that everyone is ready for the challenge. Today I want to share the latest from our government on what they consider a drone; in addition, I have a viewpoint that I want to share with you that  speaks directly to the past, present, and the future of automation.

NTSB Decision Defining “Aircraft” as Anything That Flies

Last week, the National Transportation Safety Board, a U.S. agency better known for investigating aircraft accidents, overturned an early decision in a much-publicized case involving drone operator Raphael Pirker. The previous ruling threw out the US $10,000 fine the Federal Aviation Administration imposed on Pirker for operating his camera-equipped drone in what the FAA considered a careless and reckless manner. In its recent deliberations, the NTSB didn’t weigh whether Pirker had been careless or reckless. But it affirmed that the operator of a small unmanned aerial vehicle (UAV)—or indeed of any aerial device used carelessly or recklessly—was subject to FAA fines.

That’s indeed what the recent NTSB decision argues. “An aircraft is ‘any’ ‘device’ that is ‘used for flight.’ We acknowledge the definitions are as broad as they are clear, but they are clear nonetheless,” says the NTSB.

Yet the FAA has never fined someone for recklessly throwing a Frisbee or other kind of flying disc, which have genuinely injured people. Just last year a woman lost most of the sight in one eye when she was struck at a park in Manhattan Beach, Calif. No doubt, the thrower was careless, and unlike Pirker, caused a significant injury. But the NTSB and FAA never acted. Why not?

After all, the statute governing the NTSB’s responsibilities is as broad as it is clear: “The National Transportation Safety Board shall investigate – (A) each accident involving a civil aircraft.” I’m no lawyer, but I can read plain English. That statement comes from Title 49, Subtitle II, Chapter 11, Subchapter 3, Section 1132 of the U.S. Code. Title 49 defines “aircraft” as “any contrivance invented, used, or designed to navigate, or fly in, the air.” You don’t find a lot of people playing with Frisbees without flying them through the air, so logically they must be included if you want to follow the letter rather than spirit of the law.

Clearly the NTSB is doing some selective interpretation of federal statutes here. When it comes to the FAA’s authority to issue fines, it says, “Aircraft means a device that is used or intended to be used for flight in the air,” interprets that language literally, and seeks to include model aircraft of all types. Yet when it comes to its own responsibility to investigate aircraft incidents, the same word, defined in the law similarly (“ ‘aircraft’ means any contrivance invented, used, or designed to navigate, or fly in, the air”) is afforded a much narrower, and more sensible, interpretation.

When he overturned the fine against Pirker, NTSB administrative law judge Patrick Geraghty referred to the “risable argument” that the FAA should be in the business of policing folks flying “a paper aircraft, or a toy balsa wood glider.” Yet NTSB has embraced that very position, while accepting that “certain” aircraft regulations “may not be logically applicable” to all flying devices.

I’d say most aircraft regulations are not logically applicable. For example, the very same part of the law the FAA is using to fine Pirker (Title 14, Chapter I, Subchapter F, Part 91) holds that “aircraft” must maintain certain minimum altitudes—either 500 feet or 1000 feet, depending on whether the area is congested. Such a law can’t possibly apply to model aircraft (or Frisbees). Indeed, since 1981, the FAA has specifically urged modelers to voluntarily fly below 400 feet. So defining “aircraft” to include model aircraft creates a great muddle.

What to do is obvious: Keep your models below 400 feet. Stay clear of full-scale aircraft. And operate your model plane or helicopter as safely as you know how. But also be on notice now with the NTSB’s recent decision that no matter how responsibly you fly—even if it’s a paper airplane or balsa-wood glider—you are, technically, violating the law.

When Will We Have

Time was when a uniformed man would close a metal gate, throw a switch, and intone, “Second floor—men’s clothing, linens, power tools…” and the carload of people would glide upward. Now each passenger handles the job with a punch of a button and not a hint of white-knuckled hesitation. The first automatic elevator was installed by Otis Elevator Co. in 1924; the things became common in the 1950s.

And back in the day, every train had an “engineer” in the cab of the locomotive. Then robo-trains took over intra-airport service, and in the past decade they have appeared on subway lines in Copenhagen, Detroit, Tokyo, and other cities.

Quietly, automation has taken charge of many other life-and-death functions. It manages white-hot ribbons of steel that shoot through rolling mills. It guides lasers that sculpt the eye and scalpels that excise the prostate gland. It runs oceangoing freighters, the crews of which have shrunk by an order of magnitude in living memory. And, most obviously, it is mastering aerial warfare. Today, the U.S. military trains twice as many ground operators for its unmanned aerial vehicles (UAVs) as pilots for its military jets. Its UAVs started off by flying surveillance missions, then took on ground attack; now they are being readied to move cargo and evacuate wounded soldiers.

In the sphere of commercial flight, too, automation has thinned the cockpit crew from five to just the pilot and copilot, whose jobs it has greatly simplified. Do we even need those two? Many aviation experts think not. “A pilotless airliner is going to come; it’s just a question of when,” said James Albaugh, the president and CEO of Boeing Commercial Airlines, in a talk he gave in August at the AIAA Modeling and Simulation Technologies Conference, in Portland, Ore. “You’ll see it in freighters first, over water probably, landing very close to the shore.”

Later, when air-traffic control systems rise to the challenge, pilotless planes will carry stuff to your very doorstep. In the fullness of time, they’ll carry you.

Still, UAVs have yet to find a place in even the humblest parts of the aviation business—surveying traffic jams, say, or snooping on celebrity weddings. Such work has not yet been approved for routine purposes, even when the aircraft is small and controlled by a human on the ground—a man-machine meld that keeps a pilot in the loop. Why is it taking so long for the pilot to go the way of the elevator man?

Technical obstacles can be cited: Fully automated planes can’t yet visually identify nearby planes, and as for the remotely piloted ones, the civilian variety can’t communicate with ground stations, because they haven’t got enough bandwidth. “The name of your magazine is the underbelly of all the problems,” says Doug Davis, director of the unmanned aircraft program at New Mexico State University, in Las Cruces. “There’s not enough frequency spectrum. We have to compete for it with all these mobile phones and other demands.”

But technical problems are hardly the entire explanation. The military has proved this point time and again, by trusting automation to do things that few human pilots could do on a fair day and with a following wind. In a stealth aircraft, for instance, software fiddles from moment to moment with the flight-control surfaces; otherwise, the radar-eluding design would make the plane fall like a brick.

And for nearly two decades, automatic landing systems have been able to drop and stop a jet on the fog-shrouded deck of an aircraft carrier that’s barely twice as wide and three times as long as the jet’s wingspan—and the ship is moving. Meanwhile, the pilot sits in the cockpit, hands folded.

“Look, there’s no harder job for a pilot than landing on an aircraft carrier,” says Missy Cummings, a former jet jockey for the U.S. Navy and now an associate professor of aeronautics and astronautics at MIT. “It’s what Navy pilots have over those in the Air Force. And when I saw an F-18 land itself on an aircraft carrier, I knew my job was soon going to be over.” That was in 1994. Automation has gotten rather better since then.

In fact, the U.S. Army has now decided that if you can trust the life of a pilot to software, you can trust the life of a wounded soldier, too. It’s funding R&D into robotic medical evacuation vehicles. One such system, being developed by Piasecki Aircraft Corp. of Essington, Pa., and Carnegie Mellon University, is being designed around a system of sensors and software meant to launch and land a full-size helicopter on cluttered, unmapped ground and also fly the vehicle at low altitudes. Similar systems are under development in other countries. Israel’s Urban Aeronautics is experimenting with a ­pilotless medevac that uses four rotors shielded by cowling so that they won’t get tangled in shrubbery.

Given such advances, pilotless commercial flight is overdue, argues Cummings. Civilian UAVs could easily and profitably be deployed to survey infrastructure and carry cargo, she points out. And there’s no reason why software, alone or perhaps in conjunction with a quickly mobilized ground controller, couldn’t take over a piloted plane should something happen to both the pilot and the copilot. Already, she notes, an airliner’s software typically takes over flight seconds after takeoff, handles the landing—and most of what happens in between. The pilotst “babysits,” she says.

Of course, software that can meet only “most” of aviation’s challenges would hardly satisfy the afraid-of-flying landlubber. That’s why the pilot is still there, babysitting, until all the remaining kinks have been worked out. None of the problems are so bad as to prevent civilian pilotless planes from ever happening, but they are real, and they will have to be solved.

Food for thought and the most important part of the conversation is that in Europe, DHL has already initiated automated cargo flights. Imagine that….the future is here.

Have a good weekend, enjoy time with family and friends, and consider your options as we move forward with our series on the age of automation.