Most of us know the current air show pilots but how about the man who started it all – January 15, 2021 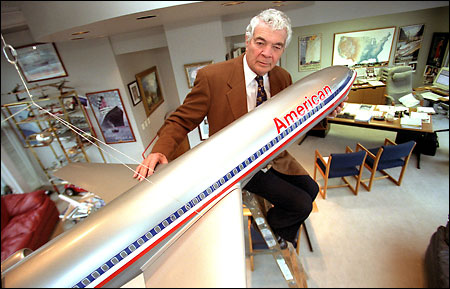 Today I want to reacquaint you with a man who has impacted general/corporate aviation in a big way….Enjoy.

James D. Raisbeck started his association with airplanes when he joined the Air Force in 1954 serving as a flight engineer. James then attended Purdue University to pursue an education in aeronautical engineering and mathematics. After graduating, he joined The Boeing Airplane Company as a Research Aerodynamicist. He was part of a team of engineers and flight crew that designed and flight-tested an internally blown trailing edge flap system on the Prototype 707 (Dash 80) to fly at speeds as slow as 60 knots.

In 1969, he left Boeing to become President and Chief Engineer of Robertson Aircraft Corporation. There he and a team of former Boeing engineers completed the Robertson Short Takeoff and Landing designs for installation on Cessnas and Pipers. Robertson Aircraft was sold in 1973, and James went out on his own, establishing the Raisbeck Group, and then Raisbeck Engineering.

Raisbeck has influenced many business turbine aircraft designs, including:
designing and producing the Supercritical Wings and many systems for the Rockwell International jet Sabreliner 65-series; new and more efficient wings for the Learjet family; performance enhancement systems for Beechcrafts entire Beechcraft King Air family; and Aft Fuselage Lockers for the Learjet family. In 2014, Raisbeck introduced a new and innovative line of propellers for the King Air family, named the Raisbeck Swept Blade Turbofan Propeller System.

Raisbeck Engineering has also been active in the worlds commercial airline fleet. 1996 saw the introduction of the Raisbeck Stage 3 Noise Reduction Systems for the Boeing 727, covering all models and weights without costly engine modifications. The year preceding 9/11, Raisbeck developed bullet-proof doors and bulkheads for the Boeing 737s and 757s. Shortly after 9/11, Raisbeck began production delivery of Armored Cockpit Security Systems and, in March 2002, Raisbecks entire program and customers were turned over to Boeing.
In 1999 James was honored with Purdues Outstanding Aerospace Engineer Award and the AIAA Commercial Aviation Technical Achievement Award. In 2000 he was awarded Professional Pilot Magazines Aviation Entrepreneur of the Year. In 2002 The National Business Aviation Association awarded James its Lifetime Achievement Award for Meritorious Service to Aviation. He was recognized by the AIAA/Museum of Flight as a Pathfinder in 2007 and he received the Lifetime Aviation Entrepreneur Award by the Living Legends of Aviation Foundation in 2008.

James is married to Sherry Raisbeck and through their Foundation the Raisbecks have given significant grants aimed at supporting Education, the Arts, and Medical Research. In addition, they helped build Raisbeck Aviation High School, renamed for their generous personal and financial contributions to the school and their scholarships to enhance the education of the next generation of aviation and aerospace pioneers.

Enjoy the weekend, be safe/fly safe, and check back next week when we will talk about ?????