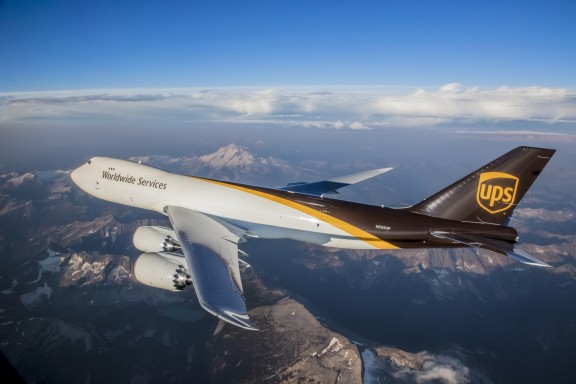 A few weeks ago we talked about the “Queen of the Skies” -The Boeing 747 – and the man who brought the airplane in to being. This week I have a couple of articles on why Boeing was going to cease production of the 747 and how UPS stepped in to save the day.

Boeing finally conceded publicly Tuesday that while the all-cargo model of its 747 jumbo jet will continue to sell, the longtime “Queen of the Skies” has no future as a passenger plane.

Differing sharply with the outlook from rival Airbus, Boeing expressed extreme doubt about the entire “very large aircraft” segment of the passenger-jet business and projected that the days of the Airbus A380 superjumbo are also numbered.

But that rosy overall outlook contrasts with Boeing’s prediction for the niche occupied by the 747 and the A380, which typically seat 410 and 544 passengers respectively.

“We don’t see significant demand for passenger 747-8s or A380s,” Tinseth said in an earlier briefing embargoed until his presentation in Paris.

He said Boeing in the years ahead expects to sell “just a handful” of nonfreighter versions of the 747, consisting of VIP private planes for foreign heads of state plus the two or three heavily modified 747s that will be supplied to serve as the Air Force One planes for the U.S. president.

“We don’t see much demand for really big airplanes,” Tinseth said. Furthermore, he added, “we find it hard to believe Airbus will be able to deliver the rest of their A380s in backlog.”

The Boeing 747, with its instantly recognizable forward hump, is an icon of the aviation world.

The initial model, designed and built by a Boeing team dubbed “The Incredibles” and led by legendary engineer Joe Sutter, carried two and a half times as many passengers as the company’s first international jet plane, the 707.

The 747’s immense size, long range and fast speed helped transform international air travel in the ’70s and ’80s from the domain of the wealthy to something accessible to the masses of the middle class.

Boeing has delivered 1,552 jumbo jets since the first 747 in January 1970. Nearly four out of five were passenger models.

But the market for the plane has eroded over time as airlines have switched from four-engine to more fuel-efficient twin-engine jets.

At the same time, route networks have evolved to support smaller planes flying more frequently and directly, rather than big planes going through giant hubs.

At the end of May, Boeing had just five unfilled orders left for the current model 747-8 passenger jet, including three for bankrupt Russian carrier Transaero that may or may not find a home elsewhere.

Airbus has just over 100 orders for the superjumbo A380 remaining in its backlog.

“The biggest airplane in the market moving forward will be the 777X,” Tinseth said.

A year ago, Boeing was predicting that over 20 years the world’s airlines would require 430 deliveries of 747s and A380s.

This year the very large segment isn’t broken out separately and the whole widebody category is reduced by 290 airplanes compared to the year-ago figure.

Boeing’s separate forecast of 920 freighter jets needed over the next 20 years projects that about 550 aircraft will be large widebody freighters, meaning 747s or 777s.

This Boeing forecast for the biggest jets is in sharp contrast to the Airbus global-market forecast released earlier this month.

And though the A380 is clearly in real trouble with zero net orders since 2015, the European jet maker still hopes it can sell more.

In Paris, Airbus announced Monday a study to add winglets to make the A380 more fuel-efficient and a denser seat configuration to improve its economics.

Boeing, though, has stopped trying to further develop its 747. As a passenger jet, it’s fading fast.

According to a database maintained by FlightGlobal, 253 passenger 747s are still flying worldwide.

Another 374 freighter versions are still operating, along with 34 that are government owned or VIP private models.

Blue chip carriers Air France, All Nippon Airways, Japan Airlines, Cathay Pacific and Singapore Airlines have all retired their 747 fleets. And this year United and Delta, the only remaining U.S. airlines flying 747s, are set to retire their last jumbos.

While Boeing’s forecast sounds a death knell for the 747, otherwise its projections are glowing.

Despite all the geopolitical dangers in the world today, airlines have mushroomed, creating fierce competition and lower fares that boost demand in emerging markets, especially in China and Southeast Asia.

Along with air travel in developing economies, demand will be driven by the emergence of new low-cost carriers and the need to replace aging aircraft, Tinseth said. In addition, he said, new airplanes will “reshape the market” by connecting pairs of cities that don’t have direct service today.

So Boeing projects demand for a total of 41,030 new airplanes in the next two decades.

Boeing projects that almost 6,000 of the current worldwide fleet of commercial airplanes will still be flying in 2036, which means the world’s fleet will double in the coming two decades, from 23,480 planes now to 46,950 planes two decades out.

How long can 747 production in Everett continue?

That’s entirely up to the cargo-jet market now.

Tinseth said there’s currently still more supply than demand for air-cargo capacity in the market, but Boeing notes an uptick recently and is projecting 3.5 to 4 percent cargo traffic growth for this year.

Boeing has just 15 unfilled 747 freighter orders in its backlog.

At the current slow production rate of one every two months, that backlog plus the few passenger jets remaining will keep it going through to the end of 2019, when Boeing should be making the next generation of Air Force One jets.

United Parcel Service (UPS) just ordered 14 more Boeing 747 freighter aircraft, announcing the deal on Feb. 1, the 30th anniversary of the founding of UPS Airlines. The new 747s, pegged at a list price of $5.65 billion, join 14 747s ordered by UPS in 2016. The company cites continued growth in its air freight business and positive effects of the recent U.S. tax overhaul as the main drivers for the big buy. Airbus, which once offered an A380 freighter variant, could only watch.

UPS and Boeing are responding to the whopping 9% rise in freight demand in 2017. Meanwhile, air freight capacity (“lift”) rose only 3%, according to the International Air Transport Association, which predicts another 4.5% growth in 2018. David Abney, UPS chairman and CEO of UPS, said, “UPS’s International segment has produced four consecutive quarters of double-digit export shipment growth.”

With all this demand, much of it driven by insatiable consumerism for everything from food to phones, the heavy lift capability of the 747 freighters is key. UPS, for example, typically flies its 747-800s on high-traffic routes to Asian cities. The big jets connect in Alaska to UPS’ primary hub in Louisville and to other hubs in Philadelphia; Rockford, Illinois and Ontario, California.

UPS Airlines president Brendan Canavan, who also ordered four 767 freighters, said, “The new freighters will allow us to continue upsizing aircraft on routes and will create a cascading effect that will boost capacity on regional routes around the world.”

Ironically, while only cargo keeps the 747 production line open, the superjumbo passengers prefer, the A380, was once supposed to be the queen of air freighters as well. Although Airbus has many cargo aircraft, including the fascinating new Airbus Beluga, the UPS order might once have been filled by the A380F.

It’s getting hard to find 747s in passenger service, although Korean Airline and Lufthansa are among a handful of airlines flying 747s. But with the nostalgia-inducing last flight of both Delta and United’s 747s in 2017, no American airlines operate the plane. Instead, the larger and much more modern Airbus A380 is clearly the superjumbo of passenger preference. More than 200 A380s currently fly in passenger service, and a new order from Emirates that will bring the build total to nearly 350 and keep the A380 production line open until at least 2028 was recently announced.

Of course, with the phase-out of 747s from passenger service in US flag carriers, one could say that US carriers are operating just as many A380s as 747s. That is, zero. Nonetheless, the Boeing will keep flying for many years to come and will be built until at least 2022, 53 years after its launch in 1969. The secret? Cargo.

An A380 freighter was designed. One was actually built and flown. It would have been a formidable competitor, with a 10,000km range and 150-ton capability.

UPS competitor FedEx was announced as the launch customer for the A380F freighter, with 20 A380Fs ordered. International Lease Finance and UPS were other announced customers. Deliveries were supposed to start in August 2008 but production delays pushed deliveries back to 2009 before another round of production issues set deliveries back “at least” another year. At that point, in 2006 (a year before the A380’s first commercial passenger flight) FedEx canceled the order, replacing it with smaller but available 777 freighters.

“We had six A380s due in 2009 – almost a million pounds of lift – and the uncertainty of the schedule caused by the delay affected our ability to fulfill our lift requirements,” David Sutton, FedEx managing director aircraft development, acquisitions, and sales said at the time. “We lost confidence in Airbus’s ability to deliver when it said it would, and there was the prospect of further delays.”

In 2005, UPS had ordered 10 A380Fs with an option for another ten. But four months after FedEx canceled its order, UPS did the same in 2007, also cites the two-year delay, adding “it decided to cancel after it learned Airbus was diverting employees from the freighter program to work on its passenger plane program.” The UPS “freighter freeze” proved the end for the A380 freighter program, although the diverted resources helped in the rollout of the successful passenger version.

Ironically, in 2016 Boeing was ready to cancel the 747. What is thought the last passenger 747 rolled off the assembly line in July of 2017 for Korean Airlines. What is keeping the Boeing production line open is more than thirty 747 freighter orders, including the 28 from UPS and smaller orders from Qatar Airlines (itself an A380 passenger customer), Nippon Cargo, and AirBridge.

Although the A380 has become a success as a passenger plane, impressing airlines and customers alike, the end of the freighter program a decade ago means the A380 won’t have the same end-of-life insurance policy as the aging 747.

Have a good weekend, enjoy time with family and friends, and be safe/fly safe.