Upside Down Pangborn…..First to Fly Nonstop Across the Pacific – May 8, 2015

We are all aware that manufacturers such as Boeing, Lockheed, and others provide aircraft to the military; however, there is a company that manufactured regional airliners that also became a supplier to the U.S. Military and that company is Shorts Brothers out of Belfast, Ireland and today we will talk about those airplanes – the Shorts 330 and 360.

However, before we talk about the 330/360 I want to mention that the Short Brothers airplanes replaced a STOL aircraft called the Caribou. This airplane was widely used in Vietnam and in the not so distant future I will be devoting a blog to this legendary airplane and its short field/airdrop capabilities. 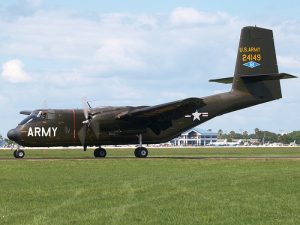 Now, back to Short Brothers aircraft……….

Short Brothers was founded in London, circa 1908, and has played a major role in the development of aviation worldwide. I wrote an article last year on Imperial Airways, which tells the story of an airline which ultimately turned in to British Airways, whose success in connecting England to the rest of the world was made possible as a result of the Short Brothers flying boats. This story is very similar to the Pan Am saga, except Imperial Airways was the first to undertake the challenge, but today we will not talk about the British Clippers but instead fast forward to the 1980s when Short Brothers entered the military market with a regional airliner built to the specifications outlined by the USAF.

Short Brothers originally entered the commercial market with the SC.7 Skyvan, then the 330, and finally the 360; however, it was the 330 that caught the eye of the USAF. 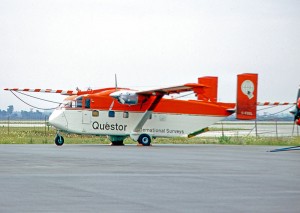 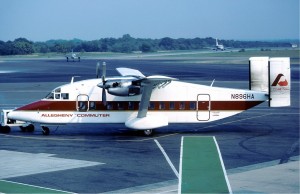 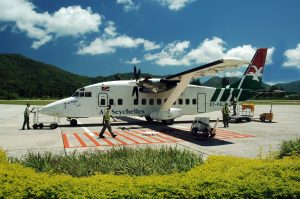 The Short Sherpa (modified Short-330) was a freighter, fitted with a full width rear cargo door/ramp, which first flew on 23 December 1982 with the first order for 18 aircraft being placed by the United States Air Force in March 1983. These aircraft were assigned to Military Airlift Command (MAC) for the European Distribution System Aircraft role flying cargo, and personnel, between US Air Forces in Europe.

The C-23B designation was used to recognize Sherpas handed down from the USAF to the Army National Guard. The Army National Guard also accepted 10 new-build units for a grand total of 16. While essentially similar to the C-23A before it, the Army National Guard version incorporated a span of rectangular windows along the fuselage sides. Some twenty-eight preowned Short 360 models were procured by the United States Army and promptly converted to a new C-23B+ / C-23C “Super Sherpa” standard in line with the C-23A and C-23B before it. The US Army contracted West Virginia Air Center to modify the airframes from their original single vertical tailfin state to the C-23A/B-style twin-rudder configuration. Now, here is where the story gets interesting……

The tails were cut off of the used 360 aircraft, a thirty inch section of the fuselage was removed forward of the wing, and Dehaviland of Canada built new tails. The replacement of the tails also incorporated a cargo ramp which would open downward, when the aircraft was on the ground, and then when the aircraft was in flight the door opened upward so that the airplane could drop jumpers and cargo. A nice job of engineering by Dehaviland and in addition to the mod center in West Virginia the Army also built a training center, with full motion simulators, at the same location.

Now, here is an article off of the Army’s web site that details the life and times of the C-23.

as the Army Guard Retires Their Remaining Aircraft 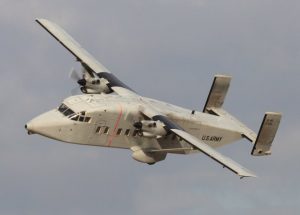 WASHINGTON (Jan. 9, 2014) — The sounds of the C-23 Sherpa are now a thing of the past as the Army National Guard bids farewell to the venerable aircraft after two decades of service.

The box-shaped aircraft described by many as a “work horse” is now heading into retirement.

Throughout its operations in the Army Guard, the Sherpa has been used in response to natural disasters and war missions, said Maj. Matthew Moore, chief of future operations with the Operational Support Airlift Agency, or OSAA, adding that it was also a widely used aircraft to support parachute-drop training missions for all components of the Army and special operations organizations.

The Sherpa, a fixed wing aircraft, was introduced to the Army Guard in the early 1990’s, and has been flown in countless missions in both stateside and overseas operations, including the 1991 Gulf War and more recently during operations in Iraq and Afghanistan.

“The C-23 provided limited rear support during the Persian Gulf War,” said Moore. “However, it saw continued action from 2003 through 2011, in Operations Iraqi Freedom and New Dawn, often moving half-a-million pounds of cargo a month.”

The aircraft has seen continued use in other missions as well, including in Egypt as part of the Multinational Force and Observers’ peacekeeping mission.

“I was fortunate enough to ferry the first C-23 through Israel to El Gorah, Egypt,” said Chief Warrant Officer 5 Clarence Shockley, an instructor pilot and instrument examiner for the OSAA. He said the mission was two-fold: first to use the C-23 as an observation platform for the Multinational Force and Observers, to monitor military activity on the Sinai to ensure compliance with the peace treaty between Israel and Egypt, and, second, to provide transportation to personnel and cargo from different locations throughout the region.

The Sherpa was no stranger to disaster response or providing assistance to other countries around the world.

“The C-23 provided disaster relief during hurricanes, the oil spill in the Gulf of Mexico, forest fires, flooding, blizzards and the earthquake in Haiti, and was also used during the (2010) Winter Olympics in Vancouver, British Columbia,” Shockley said.

The Sherpa was a versatile aircraft and was used to do things other cargo aircraft could not do, Shockley said.

“A C-130 (Hercules aircraft) simply cannot land at every location,” he said. “Sometimes a CH-47 (Chinook helicopter) is too expensive to operate for a light load. It was another tool that was cost-effective in homeland defense, disaster preparedness and the Global War on Terrorism.”

But for Shockley, one of the best things about flying the Sherpa was that, “it was a very stable instrument platform,” and the crew stations were comfortable.

Now with the aircraft at its final destination and set to be retired, Shockley said he has many personal memories about the aircraft.

“My first deployment, in 1999, was to Soto Cano Air Base, Honduras, for disaster relief after Hurricane Mitch devastated much of the coastal regions of Central America,” Shockley said. During his time in Honduras, he flew the Sherpa to haul disaster relief supplies, medical personnel, engineers and construction equipment throughout Central America.

Other moments stand out as well. Shockley recalled a flight in 2009 from Greenland to Iceland when a cockpit side window blew out.

“It was a little noisy and cold, but where are you going to land when you are over the North Atlantic? We landed in Keflavik, Iceland, without any problem,” Shockley said.

Being a pilot of the Sherpa also sparked an interest in the aircraft in Shockley’s son Conor.

“You see, the first time Conor was in a C-23 he was barely one year old,” said Shockley. “He was bundled up in a snow suit at Fort Wainwright, Alaska, and sitting on my lap. He would reach up to the yoke and try to move it.”

Throughout the years, Shockley continued spending “Sherpa time” with Conor and Erin, Shockley’s wife, adding that the “toddler grew into the small boy and each visit to the Sherpa was not complete without a thousand questions that only a young boy could ask.”

Sixteen years after first introducing the aircraft to his son, Shockley and his son recently had their final “Sherpa moment” together.

“As Conor sat in the cockpit one last time, he looked around with a smile on his face and I realized that the little boy had grown into a young man, but the enjoyment he once had for sitting in dad’s airplane was still there,” Shockley said.

The last Sherpa’s journey to its final destination to the United States was not easy.

Shockley, who was part of the crew that flew the final Sherpa in the inventory on its final mission, said that electrical issues and inclement weather caused several delays in getting the aircraft home from Egypt.

Still, Shockley said was glad to have flown the Sherpa this last time.

“It was a privilege to have had the opportunity to fly the last Sherpa into retirement and the greater privilege was to have served as a crewmember with those hard-working quiet professionals,” said Shockley.

Now you would think that these airplanes were destined for the scrap heap…yes? Well, not exactly…..

The 15 Sherpa C-23B aircraft that were transferred from the U.S. Army to the U.S. Forest Service are still in limbo. The expectation is that they will be used by smokejumpers and for transporting cargo, paracargo, and possibly firefighters.

The aircraft are still at Fort Sill, Oklahoma after being transferred in February, but some of them will be moved to Tucson in the next month or two where they will be evaluated and tested by the Smokejumper Aircraft Screening and Evaluation Board (SASEB), an organization much like the Interagency AirTanker Board.

Smokejumpers have used Army surplus C-23A Sherpas for years, but one of the main differences between the older C-23A and the newer C-23B is that while both have a rear cargo ramp, like a C-130, the ramp on the C-23A will not open in flight. The SASEB will evaluate and test the use of the rear ramp for paracargo and jumpers while in flight. Typically they will begin by tossing out small cargo items, moving up to human-sized dummies, and ultimately live human smokejumpers.

The Board will also evaluate the need for painting, avionics, removal of any unneeded military equipment, and will ensure conformance with the FAA Certificate, but since they will not be used as air tankers, retardant tank systems will not have to be installed.

The obvious question at this point is what is the Army going to use as a  replacement for the C-23 and the answer is the Alenia C-27J; however, things are not working out the way the Army planned and may in fact have them starting a new search for something suitable to their needs. The article below details the problems. 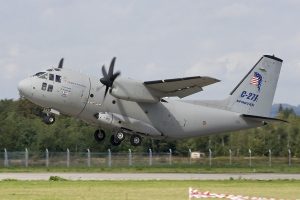 For the U.S. Air Force, ending the purchase of C-27J transport planes was just one of thousands of decisions needed to help cut Pentagon spending by nearly a half-trillion dollars over the coming decade.

But for Alenia, a Finmeccanica company, the decision is a threat to the future of the twin-engine plane and 1,000 workers at two factories that build it.

Once a nearly $6 billion Army program for 145 aircraft, the Air Force took over the effort in 2009 and capped the purchase of C-27Js at 38 planes. But in its recent 2013 budget request, it decided to end the program at 21 aircraft, 17 fewer than expected, and retire the fleet next year.

With the U.S. order capped and the aftermath of U.S. and European budget cuts, the C-27J’s prospects have dimmed. A derivative of Alenia’s G222 with new engines and avionics, 62 C-27Js have been sold worldwide: 21 to America, 12 to Italy, eight to Greece, seven to Romania, four to Mexico, four to Morocco, three to Bulgaria and three to Lithuania.

It remains unclear how much the Air Force will save by deferring the option for 17 additional aircraft, or if the service will even be required to pay Alenia a termination fee, sources said.

So, at this point the Army is in a bit of quandary but I feel certain things will sort themselves out this year. Have a good weekend, keep family and friends close, and remember that tomorrow morning when you wake up life is one day shorter….Stay close to the ones you love and enjoy the moment.