A Man Named Lawson – From Major League Baseball to Aviation Pioneer May 1, 2015

Upside Down Pangborn…..First to Fly Nonstop Across the Pacific – May 8, 2015 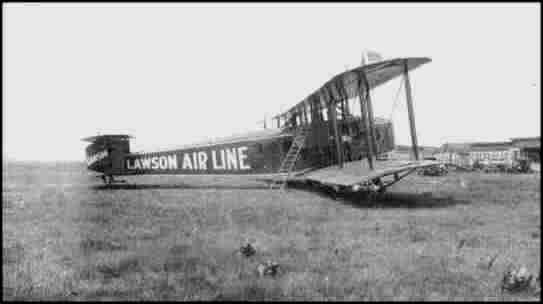 Last Friday we talked about the man who brought passenger airliners to life but failed in his attempt to establish scheduled service; however, that which finished the man, considered by most to be a true aviation pioneer, was a thing called “Lawsonomy.” The specifics are briefly talked about below and unfortunately this concept/philosophy, by Lawson, ruined his life and he died in seclusion a disgraced and broken man.

In the 1920s, Lawson promoted health practices, including vegetarianism, and claimed to have found the secret of living to 200. He also developed his own highly unusual theories of physics, according to which such concepts as “penetrability”, “suction and pressure” and “zig-zag-and-swirl” were discoveries on par with Einstein’s Theory of Relativity. He published numerous books on these concepts, all set in a distinctive typography. Lawson repeatedly predicted the worldwide adoption of Lawsonian principles by the year 2000.

He later propounded his own philosophy, Lawsonomy, and the Lawsonian religion. He also developed, during the Great Depression, the populist economic theory of “Direct Credits”, according to which banks are the cause of all economic woes, the oppressors of both capital and labour. Lawson believed that the government should replace banks as the provider of loans to business and workers. His rallies and lectures attracted thousands of listeners in the early 1930s, mainly in the upper Midwest, but by the late ’30s the crowds had dwindled.

In 1943, he founded the University of Lawsonomy in Des Moines to spread his teachings and offer the degree of “Knowledgian,” but after various IRS and other investigations it was closed and finally sold in 1954, the year of Lawson’s death. Lawson’s financial arrangements remain mysterious to this day, and in later years he seems to have owned little property, moving from city to city as a guest of his far flung acolytes. In 1952, he was brought before a United States Senate investigative committee on allegations that his organization had bought war surplus machines and then sold them for a profit, despite claiming non-profit status. His attempt to explain Lawsonomy to the senators ended in mutual frustration and bafflement.

A farm near Racine, Wisconsin, is the only remaining university facility, although a tiny handful of churches may yet survive in places such as Wichita, Kansas. The large sign, formerly reading “University of Lawsonomy”, was a familiar landmark for motorists in the region for many years and was visible from I-94 about 13 miles north of the Illinois state line, on the east side of the highway. Although the sign still exists, the “of” has now been replaced by the URL of their website. As of a storm in spring 2009, the sign is no longer there, although the supporting posts are still visible. On the northbound side of I-94, a sign on the roof of the building nearest the freeway said “Study Natural Law” until being shingled over in October 2014.