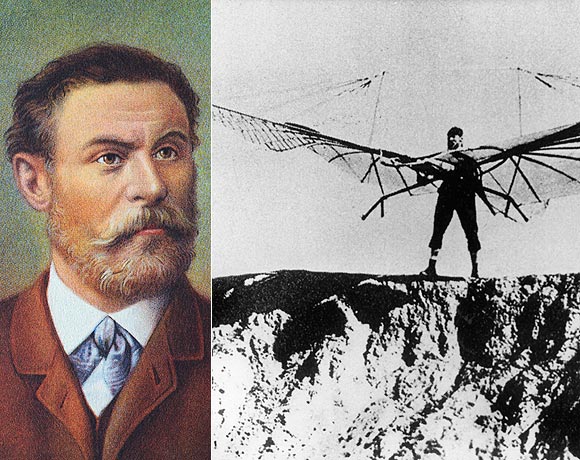 Today’s blog looks back at a man whose contribution to the success of aviation is unquestioned. The Wright Brothers considered the work done by Lilienthal invaluable and Wilbur Wright acknowledged that fact in the following statement:

Most aviation historians, and scientist, agree that the research conducted by Lilienthal was essential to the progress of aviation and while there are others who contributed to that progress I consider Otto Lilienthal’s contributions to be equal to that of Sir George Cayley.

The article below is from the Otto Lilienthal museum. I have spent a good amount of time on this site, in the past, and have found the resources there invaluable. I recommend you visit the site so what I have done is given you a link, at the end of the article, which will take you to the site and allow you to continue reading.

(The idea of human flight and the history of aviation)

Numerous authors wrote histories of aviation especially since the birth of the aeroplane. They are all quite similar. Most differentiate on principles of physics between two basic branches: “lighter than air”, for example the hot air balloon or the airship, and “heavier than air” including the aeroplane and the helicopter.

The balloon was born in France in 1783 when the first people went up in the hot air balloon of the brothers Montgolfier or the hydrogen balloon of Prof. Charles. The birth of the aeroplane is connected to two remarkable events: the successful gliding flights of the German Otto Lilienthal from 1891 to 1896 and the first flights of the Wright brothers (USA) with their aircraft in 1903. The history of aviation is of course very extensive and so there are numerous amazing pioneer achievements before and after the just described events. The “first” flights are also not undisputed. There are reports about earlier ones, but either their reliability is not certain or they did not influence the development sustainable. 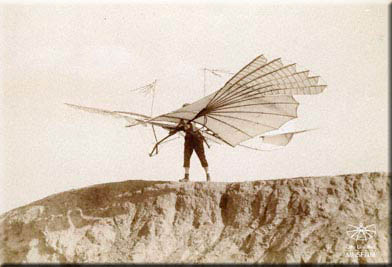 (Otto Lilienthal with his “small wing flapping apparatus” in 1894)

There are two other reasons why the invention of humans flying takes a special position among the technical pioneer achievements. First, the just described picture of history describes only the technical side of human flight from today’s point of view. The kite, the most important forerunner of the aeroplane, is seldom mentioned. With it free flight was not yet possible, (it would be more correct to say flights over certain distances, because the freedom of a balloon ride is similarly limited) but manned takeoffs were certainly possible a several centuries earlier. The wish to travel in the air was not the original idea or impulse of human flight, but to conquer the sky, to leave the surface of the earth and so the earthly vale of tears. Second, the technological history of the aeroplane is connected to a cultural history of the idea of human flight in a way only a few other inventions are. Independent from the technological history the cultural history can be followed up to ancient times and it does certainly not end with the realization of the aeroplane. In 1999 a song in the charts was called “I dream I can fly”. And the Nobel prize winner for literature Elias Canetti writes “Our dreams like the one to fly are fulfilled and died one after the other. Can you have a new dream?”.

Naturally questions arise about the background of unconfirmed records which describe flying apparatuses. What was the dove of the Greek mathematician Archytas of Tarant (around 400 BC)? Were the flights of the locksmith Besnier and the “message of the flying ship from Portugal at the 24th of June [1709] happily arrived with its inventor in Vienna” really only hoaxes? How did the astonishing technical details get into the flight descriptions of Ikarus, Daedalus or Wieland the Smith? 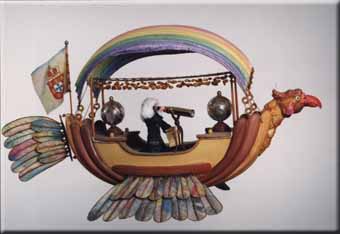 (“la Paserola (the great bird)”, 1709, supposedly successfully done project of the Brazilian Portuguese clergyman Bartholomeo Lourenco de Gusmao. A flying apparatus with features of an aeroplane and of an airship made of amber, lodestone and other inventions.)

Following we are going to look closer at two historic events with special concern of Wieland’s flights described in the Thidreks legend:

The oldest known depiction of human flight is dated between 2350 and 2150 BC. The 4cm high clay seal can be seen in the Museum of Ancient Near Eastern Antiquities in the Pergamon Museum in Berlin. It reveals a 10 cm wide clay relief showing the shepherd Etana riding an eagle.

(Aviation in sumerian mythology: Clay relief (Museum of Ancient Near Eastern Antiquities in the SMPK Berlin)

Legends, myths and pictures of flying people are not seldom. When did reality mix with these tales? Humans attributed the ability to fly to their deities, mythical figures and demons. The ability of the higher creatures expressed the dream, wish, the trial and the urge of the humans to fly themselves.

It is not a surprise that earlier attempts to fly started work where humans obviously lack bodily prerequisite: The human needs wings. With wings it should be possible to gain the same supremacy in the air as birds and insects. So humans tried over and over again to make their stretched out arms become wings. But what are wings? What is the essential characteristic of the wings of birds that gives them the ability to fly? Lies the secret in the plumage or the bone structure? Or do they even have a special flying organ? Or is the key to be found in the ingenious movements of the wings? They did not know, but the flying of birds seemed to be perfectly natural. There are records testifying to numerous failed attempts or alleged flights.

Nevertheless we should not think that the records are complete or representative. Also it is not possible to clearly separate truth from legend. It is rather a kaleidoscope by chance of the old human dream and of the different projects for its fulfillment. Nearly all attempts are done after the same pattern. The alleged inventor thinks that he has finally found the essential detail that gives the ability to fly to the artificial wings. He climbs a tower or hill. The first flight has to be successful, because there are no safety precautions. Another essential point is that the inventor thinks that he will be able to steer his apparatus straight away. He thinks that no practicing is necessary. That seems ridiculous when we consider that an infant needs several month to keep balance under easier and more secure conditions on the surface. None of the inventors considered this problem for the three-dimensional room. To fly meant for them to have working wings, not to learn how to fly.

In the 17th century the first knowledge about the atmosphere was gained and in the closing 18th century the first knowledge on the way to the aeroplane. Before these events history of aviation seemed to be an unsuccessful search on always the same level. Clearly outstanding are the ideas of Leonardo da Vinci. Today it is assumed that these are a summary of the knowledge of his time and that they were also not tested in practical experiments.

On first glance Lilienthal (1848-1896) was still a birdman, too, a representative of the “Ikarus-Dream”. But different to his predecessors he was successful with to his arms attached wings. Several photographs proof this. But not only the proofed knowledge about his success makes Lilienthal different to his predecessors. Lilienthal`s birdlike flying apparatus is not a new, this time successful attempt to copy bird flight. The study of birds flight was for him rather the experimental starting point for a research program which resulted in the man carrying flying apparatus. He moved his research of bird flight from the pure observations of nature to the laboratory. So he could apply his knowledge to the requirements of human flight. His “physics of wing” is in great parts still valid today.

Enjoy your visit to the Lilienthal on-line museum, take some time to view the video below, and have a good weekend with family and friends.