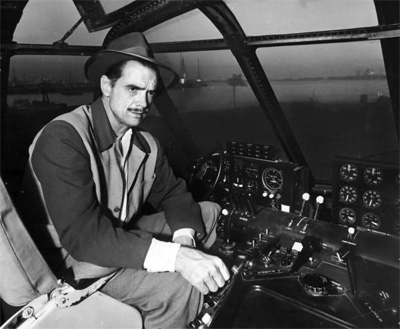 This week we will talk about Howard Hughes the man, the aviator, and the eccentric. The movie we, we have all is seen, is perhaps a little over the top but that is an opinion which you need to qualify for yourself. As always, I would like all aviators to connect with their roots and one of the ways they can do that is by using the “Third Dimension Blog” as a resource.

There are no signposts in the sky to show a man has passed that way before. There are no channels marked. The flier breaks each second into new uncharted seas. —Anne Morrow Lindberg

Howard Hughes (Howard Robard Hughes Jr.) was born in 1905 and died in 1976. His life was controversial, to say the least, and his obsessive-compulsive disorder destroyed his life in later years. It is hard to believe that he had any and all advantages of life available to him but couldn’t make it work. I think money can’t always buy happiness but it can give you a good ride for awhile.

Mr. Hughes was born in Houston and raised by his Mother. His father was a wealthy industrialist but it is my belief that there was very little contact between him and his father, and it was in fact his mother’s constant hovering over Mr. Hughes that may have been the source of his problems. However, I am sure she thought that she was helping him and not hurting him, but history tells a different tale.

As an aviator, engineer, industrialist, and film producer, he did at all. His success as a film producer was limited but all other avenues seemed to work. Mr. Hughes set multiple speed records. He built the H-1 Racer and the H-4, the H-4 is the Spruce Goose, and of course bought TWA and expanded their horizons. It should be noted that it was Jack Frye (see Part One of this series) who solicited the help of Mr. Hughes. Mr. Hughes responded by quietly buying up TWA stock until he had a controlling interest. Another point of interest about Mr. Hughes and aviation is that he suffered from tinnitus and the only place he found relief was in an airplane flying.

Mr. Hughes was considered a savior when he took over TWA in 1939, but before he was finished and gave up control of the airline in 1960, he had all but destroyed any hope that TWA could compete because he had kept them out of the jet age and allowed Pan Am, American, United, and others to set the standards while they continued to fly the Constellation. Carl Icahn would later finish the job but make no mistake. Mr. Hughes crippled the “Flyers Airline” and destroyed a brand that is gone but not forgotten.

Next week, we continue the series on TWA and will be talking about the Lockheed Constellation. This was the airplane that made TWA the leader of the industry. As always, take some time to look back, connect with your past and remember as an aviator you are a “Gatekeeper of the Third Dimension.”