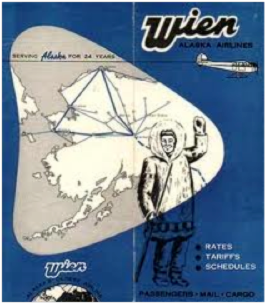 Good Morning and Happy Friday. Today we will talk about the “Father of Alaska Bush Flying” and the airline he created. If you are up to date on my recent blog articles then you know I am talking about Noel Wien who not only set the standard for bush pilots but also made commercial aviation in Alaska what it is today. For a fact sheet on Noel Wien please follow this link, FACTS, and at the end of today’s blog I have a number of photos for you to view that document Mr. Wien’s early adventures/accomplishments and flying in Alaska.

Noel Wien first came to Alaska in 1924 and immediately saw opportunity. He spent the first few weeks barnstorming, and then set his sights on connecting the 600,000 square miles of Alaska with a viable air transportation system. Most people find it illogical to use bush flying and viable air transportation in the same sentence but if you know your history, and read Robert Novell’s “Third Dimension Blog,” then you know that the “Air Mail Service Pilots” were the bush pilots of the lower forty-eight states and it was this group of Aviators that paved the way for commercial carriers like United, American, Eastern, and others.

So, now that we understand the importance of bush pilots let’s talk about Noel Wien’s accomplishments.

That’s it for this week except to say to all of the American Airlines employees that all of us here at the “Third Dimension Blog” are with you. Stand firm and don’t lose the faith—-tomorrow is another day. (Click here for the latest on AA)

Next week we will talk about the challenge of flying around volcanic ash, followed by a series of stories on the bush pilots of our time, and then on to the series on Alaska Airlines. Until we talk again, I wish the best to you and yours and want to remind you that tomorrow morning when you wake up your life is one day shorter. Keep the people you love close to you and move ahead—-The road map for your future success does not have to follow the road map from your past. Take care, fly safe, and have a good weekend. 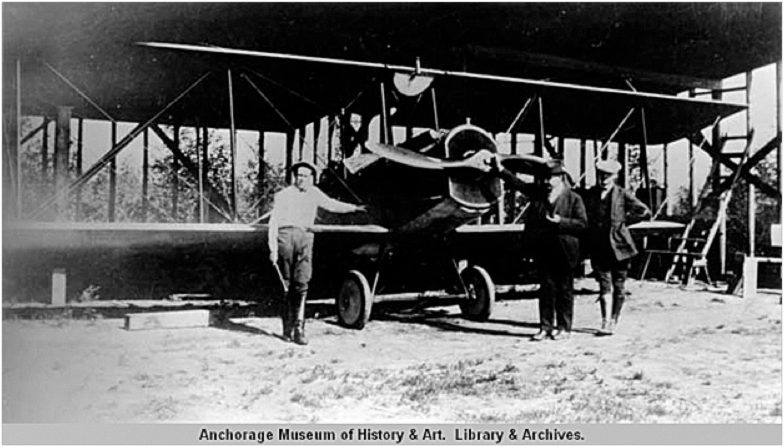 On July 15, 1924, Noel Wien (1899-1977) made the first flight from Anchorage to Fairbanks in this Hisso Standard J-1, which he affectionately called “Jenny.” The inscription on the reverse of this 1925 image from the Wien Collection reads, “The boots and caps were modish and efficient attire in 1925 for both aviators and mechanics on planes such as this.” Anchorage Museum of History and Art, Library and Archives. www.litsite.org/index.cfm. 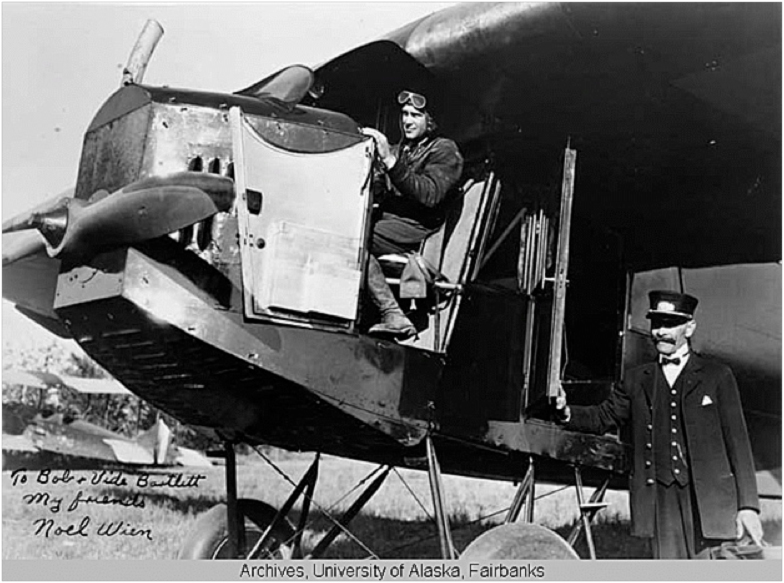 Noel Wien made the first commercial flight to Nome on June 5, 1925, for the Fairbanks Airplane Company, flying a Fokker FIII six-place cabin monoplane. Wien was transporting three passengers, Norman C. Stines and two secretaries, who were on their way to Nome to buy out the Hammond Company. Archives, University of Alaska Fairbanks–www.litsite.org/index.cfm 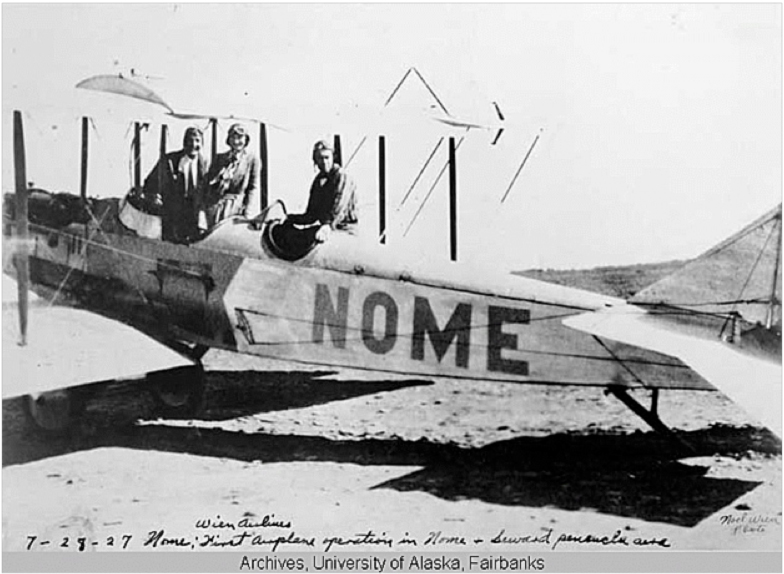 Wien Airlines, the first airline in Alaska, also was the first to operate in the Nome and Seward Peninsula area. Noel Wien, who took the picture on July 27, 1927, noted on the back: “Notice spare prop. Tied on side of fuselage on wing. N. Wien.” Archives, University of Alaska Fairbanks– www.litsite.org/index.cfm 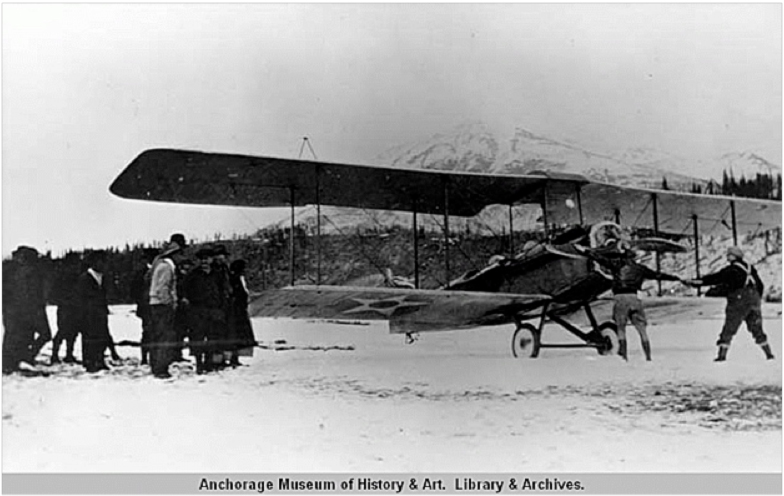 The first flight across the Arctic Circle in Alaska occurred in 1927, when Noel Wien flew his Hisso Standard J-1, which he called “Jenny,” landing in Wiseman on the southern flanks of the Brooks Range. Wien is standing in front of the propeller. Anchorage Museum of History and Art, Library and Archives– www.litsite.org/index.cfm 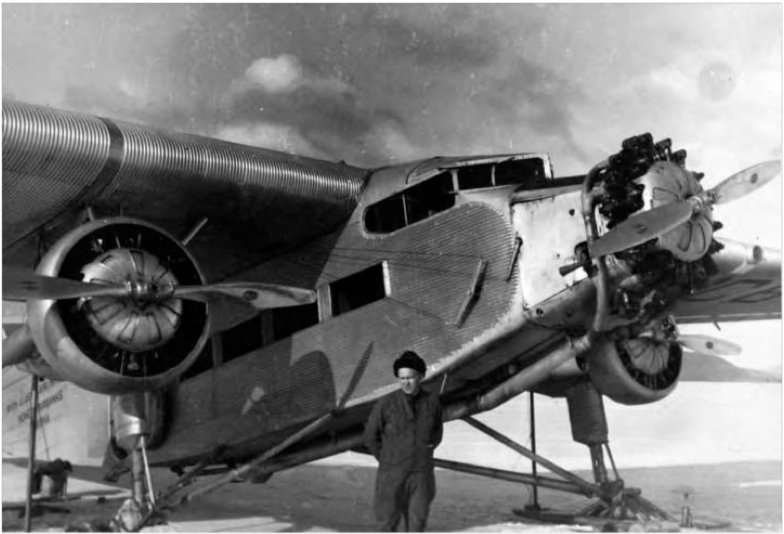 Photograph of Noel Wien standing in front of his Ford Tri-Motor. The photo is from the “Wien Family Papers Collection,” and the caption under the photo reads—“Noel-1939.”—http://vilda.alaska.edu/ 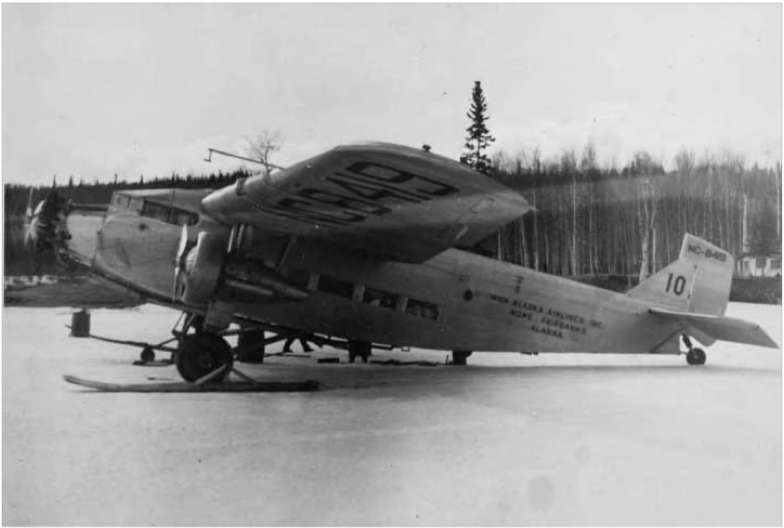 This photo is from the Noel Wien Collection and the caption underneath the photo reads—“Harding Lake 1938. Would take off in Spring Fairbanks Field on wheels and change to skis on Harding Lake and then fly to Seward Peninsula points.”—www. vilda.alaska.edu/ 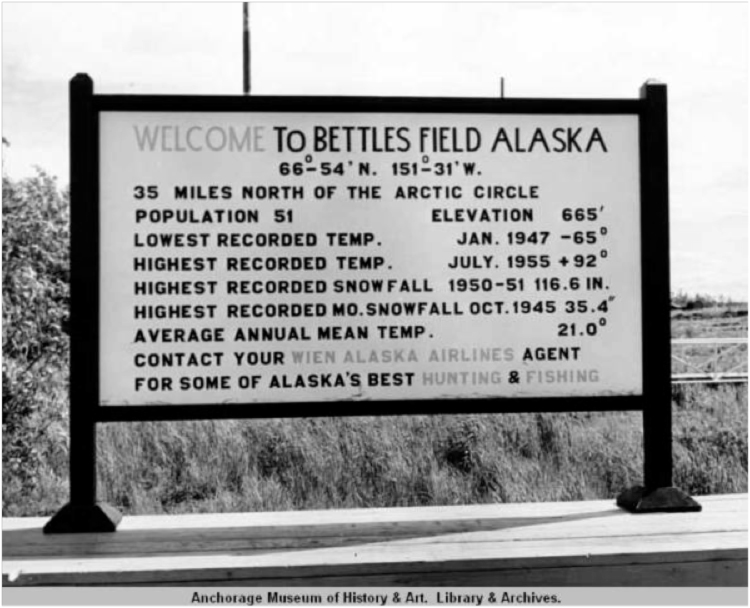 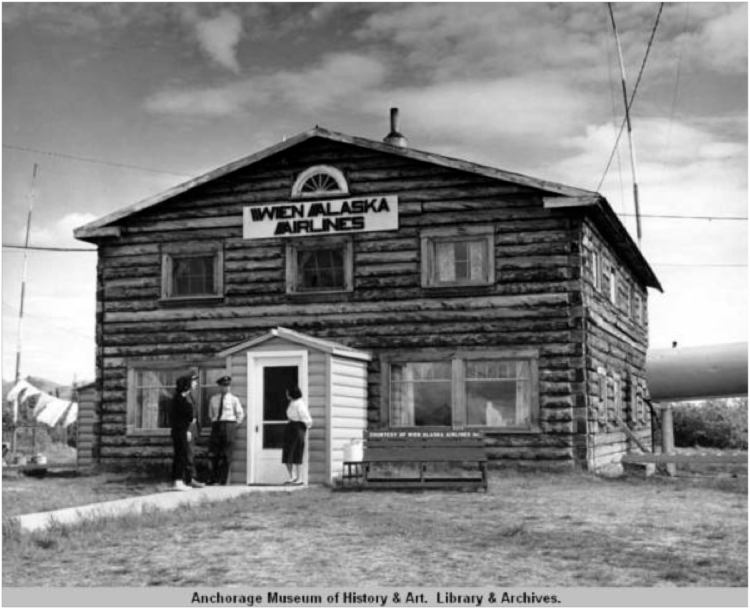 Wien Alaska operated a number of lodges and hotels much the same as Pan American Airways did. The lodge pictured above was located in Bettles, Alaska. 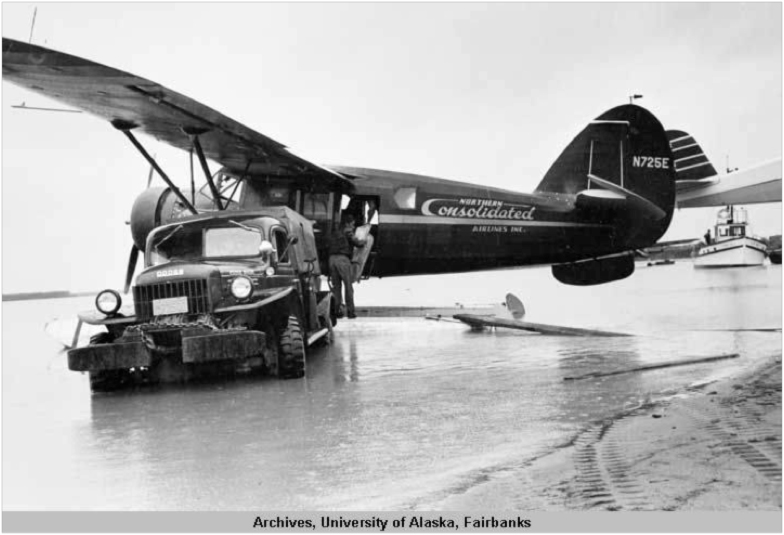 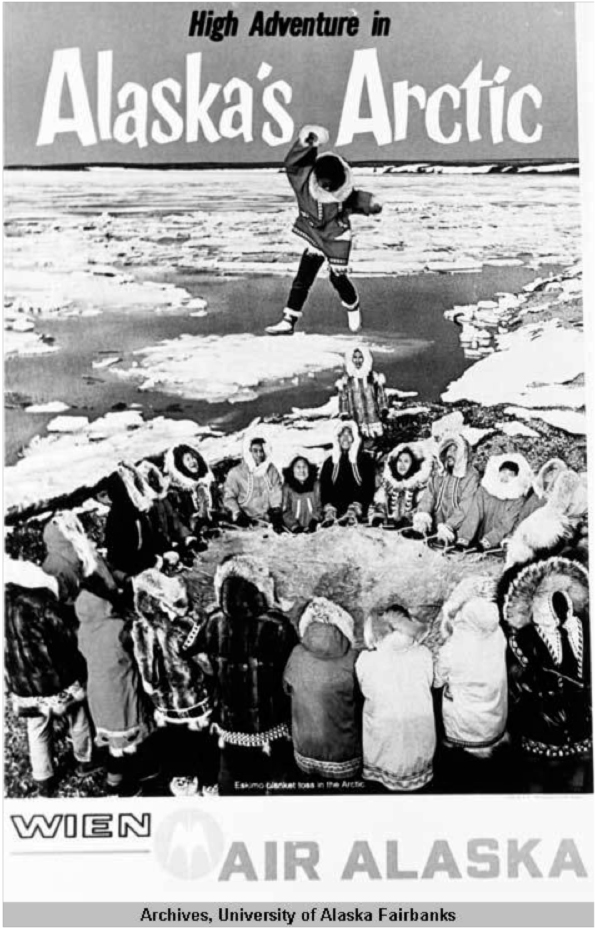