Pan Am, my favorite airline of all time, was brought in to being to represent the U.S. internationally and was given preferential treatment on all fronts to ensure their success. There was another company 3000 miles away that also had the same status for their country. The company was Imperial Airways and the country was Great Britain.

I think what you will find interesting is that the Imperial Airways model looks very similar to that which the U.S. was doing with Pan Am; however, Imperial Airways began it’s operations in 1924 which was before Pan Am began it’s Miami Clipper operation. It would appear that Aeromarine paved the way for Pan Am in the Caribbean and Imperial Airways gave Juan Trippe a blueprint to follow as he pushed his airline to the forefront of commercial aviation.

Come with me now as we go back and explore the origins of British Airways. Enjoy……………………….. 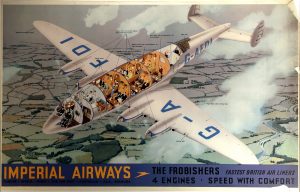 In 1923 a Government Committee was appointed to review the policy of subsidizing airlines. It duly reported and recommended that the main existing aircraft companies should be merged into one organization, with the mission of developing British Commercial Air Transport on an economic basis, and creating a company which would be strong enough to develop Britain’s external air services. As a result, Imperial Airways Limited was formed on 31 March 1924, and on 1 April 1924 it took over the aircraft and services of:  Handley Page Transport Limited, The Instone Air Line Limited, The Daimler Airway, and the British Marine Air Navigation Company Limited.

As the name ‘Imperial Airways’ implied, the organization had been formed to cast its eyes on more distant horizons than the boundaries of Europe. It was charged with the task of pioneering a chain of long distance intercontinental air services linking the countries of the British Empire with each other and with the United Kingdom. Between the two World Wars it achieved that aim.

The start of the Empire routes occurred when surveys of the Cairo-Karachi air route had been completed by 1 October 1925. In 1926 there was a large increase in the company’s fleet: A Handley Page W9 ‘City of New York’, and four Handley Page W10s ‘City of Melbourne’, ‘City of Pretoria’, ‘City of London’ and ‘City of Ottawa’ were all christened at Croydon airport on 31 March. On 16 July the new Armstrong Whitworth Argosy, the airline’s first three-engine airliner which introduced a new standard of roominess into air passenger flying came into service. On 1 May 1927, an Argosy inaugurated the world’s first named air service – it was the London-Paris ‘Silver Wing’ service on which meals were served. (Other European routes on which Argosies operated were those to Basle, Brussels and Cologne.)

On 20 December the first of the de Havilland Hercules airliners (ordered by Imperial Airways for service on overseas routes) left England for their new route from Egypt to India.

In January 1927 a service was opened between Cairo and Basra, in the Persian Gulf. To solve the difficulty of navigating across the trackless desert between Palestine and Baghdad, a furrow, several hundred miles long, was ploughed in the sand. It was probably the longest furrow ever ploughed. Further links were added at either end of the route and on 30 March 1929 the Short Calcutta (which was the first of Imperial Airways’ flying boats to be built in 1928, designed to operate the Mediterranean sectors of the long-distance routes from the United Kingdom to Australia and South Africa), left London for Karachi on the first through air service between the United Kingdom and India. Later in the same year this route was extended to Jodhpur and Delhi.

On 16 June 1930, an internal service linking London, Birmingham, Manchester and Liverpool was run three times a week. This service connected with European services at Croydon and continued until 20 September when a lack of support closed the route.

In April 1930 the surveys of the Cairo-Cape Town route were completed, and on 28 February 1931 the first part of this route was opened with a weekly service between London and M’wanza in Tanganyika. Calcutta flying boats were used on the trans-Mediterranean section and south along the Nile from Cairo.

On 1 April 1931, the first experimental London-Australia air mail flight took place. The mail was transferred to an Australian aircraft at Koepang in the Netherlands East Indies, and it arrived on 29 April in Sydney.

In 1931, two types of four-engine airliner came on to the scene. The 27 of April saw the first of three Short flying-boats, ‘Scipio’, which worked in the Mediterranean, while the first of the Handley Page H.P. 42s, ‘Hannibal’, operated on the London-Paris route for the first time on 11 June. Two classes of H.P. 42 were made. The ‘Heracles’ class for European routes, with 38 seats, were based at Croydon, and the ‘Hannibal’ class for routes in Egypt, India, and Central Africa, with 24 seats (to allow for extra fuel and baggage), were based at Cairo. These airliners brought a new standard of service, comfort, and safety to passengers. Stewards served full course meals, the Pullman style upholstery was unrivaled, and even though each of the eight built flew over a million miles, no passenger was ever hurt.

On 20 January 1932, the England-Central Africa service was extended to the Cape for the carriage of mail. Passengers first left London by air for South Africa on 27 April.

In 1933 the Armstrong Whitworth AW15 Atalantas was introduced. It was the first monoplane ordered by Imperial Airways and offered the first significant increase in airliner cruising speed since 1919, cruising at 130 mph. It was described as ‘the fastest and most luxurious aircraft designed and produced for the tropics, with ample room for passengers to walk about and chat and to enjoy refreshments’. The type operated from Central Africa to Cape Town and east of Karachi, as the service was extended to Calcutta on 6 July, Rangoon on 23 September and Singapore on 9 December. 1933 also saw Imperial Airways complete 10,000,000 miles of flying. 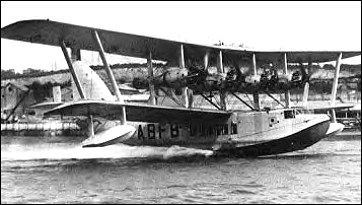 The object was to operate in association with Imperial Airways on the Trans-Australian route. The 8th of December saw the London-Singapore route extended to Brisbane for mail, the Singapore-Brisbane section operated by Qantas Empire Airways. Passengers were carried over the entire England-Australia route from April 1935.

The operation of the Singapore-Brisbane section of the Australia route led to a new airliner which would be suitable – the de Havilland D.H. 86. This was de Havilland’s first four-engine aircraft, and it was both designed and built in just four months for the Empire Air Route contract. Both Qantas Empire Airways and Imperial Airways placed orders for this type, and Imperial Airways commissioned the first of these new airliners, ‘Diana’, on 25 May 1934. The ‘Diana’ class made new European routes possible, and on 1 April 1935, a daily London and Budapest via Brussels-Cologne-Prague and Vienna route was opened. During the same year the frequency of both the London-Singapore and London-Johannesburg services were doubled.

On 19 February 1936, the ‘Diana’ class was used on a weekly mail service between Kano in Nigeria and London, where it flew between Kano and Khartoum, from where the West African service joined the main Africa trunk route. This service later carried passengers and the route terminal was extended to Lagos on 15 October, and to Accra on the Gold Coast on 13 October 1937. This route which Imperial Airways pioneered was to become a main supply route to the Middle East during the war.

The Short S-23 Empire flying boat has been described as ‘without question the most famous and successful of all pre-war civil transports’. The S-23 carried 24 day-passengers or 16 in a sleeping berth layout. A popular feature was its promenade deck. On 30 October 1936, the first of the Short Empire flying boats, the ‘Canopus’, made its first service flight on a trans-Mediterranean service. Imperial Airways were to make a bold move and order 28 of these aircraft, without awaiting trials of the first aircraft. The aircraft was a success, and further orders were placed, making a total of 42 airplanes. These flying boats were produced to put the Empire Air Mail Program into operation.

Previously Imperial Airways had to carry passengers by train between Paris and the Mediterranean on the Empire routes. The Empire flying boats introduced an all-air route from 16 January 1937, operating from Southampton by way of Marseilles-Rome-Brindisi-Athens and Alexandria. This improvement meant that all Empire services were operated from Southampton from 5th March, and Croydon was the base for European routes only.

During May 1937 Imperial Airways clocked up its 40,000 crossing of the English Channel, as well as its 1,000 flights from England to the Empire. On 15 May land aircraft were withdrawn from the England-South Africa route as far south as Kisumu in Kenya Colony to be replaced by the Empire flying boats which used the Nile bases employed by the Calcutta flying boats. On 2 June Flying boats took over the entire route.

On 16 June 1937 the first British Atlantic air service began when Imperial Airways and Pan American Airways began a joint service between Bermuda and New York, the British service being flown by the ‘Cavalier’.

Imperial Airways became BOAC, British Overseas Airways Corporation, and BOAC was merged with BEA, British European Airways, to form British Airways. There are a lot of similarities between the two airlines, Pan Am and Imperial, but it is important to remember that Imperial began its quest to conquer the world in 1923 while Pan Am did not begin to take shape until after 1927. Have a good weekend, take some time to explore the history of Imperial Airways, and take some time to enjoy family and friends. Fly Safe – Be Safe.