The RJ Revolution – The First Supersonic Bomber – The Wrights or Whitehead – June 22, 0213 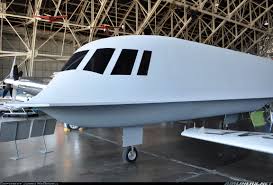 Good Morning—we are going to take a break this week, and perhaps next week as well, from the RJ revolution topic and look back at a program that gave birth to the B-2 Bomber and other programs. The program was called “Tacit Blue” and those who worked the program simply called the airplane “Shamu” because it’s profile reminded them of a killer whale. There were a total of five pilots who flew the aircraft. The first was Dick Thomas, a Northop test pilot. The air Force pilots were Lieutenant Colonel Ken Dyson (who was also a HAVE BLUE pilot) and Lieutenant Colonels, Wes Easter, Don Cornell and Major Dan Vanderhurst. The program cost approximately $165 million and covered development, construction and flight test. As the prime contractor, Northrop received a $136 million contract to provide one complete technology demonstrator and a partially-developed back-up airframe. TACIT BLUE never went into production but yielded valuable engineering data that aided in the B-2A Spirit design. It also served as a basis for several UAVs and especially the later cancelled M-137 TSSAM tri-service weapon.

Astute aviation buffs were quick to notice that Tacit Blue looks remarkably like General Atomics
Predator UAV, an unmanned surveillance drone that is currently flying missions over Afghanistan and elsewhere. Another UAV, the Teledyne Ryan Tier can also claim Tacit Blue as a direct ancestor.
Although the Air Force couldn’t be pinned down on how small Tacit Blue’s radar signature is, an
inside source at Northrop says that the Tacit Blue radar signature is about the size of a bumble
bee. That’s at least equal, if not smaller than the F-117 Nighthawk. Such an aircraft loitering at high
altitude could continuously monitor the ground situation behind the battlefield and provide targeting

information in real-time to a ground command center, without detection.

The reconnaissance technologies explored through Tacit Blue, may have lead to the development
of another still-secret tactical reconnaissance aircraft that aviation journalists and stealth chasers
refer to as the “TR-3A Black Manta.” According to aviation insiders and eyewitness accounts, the TR-3A is a span-loaded flying wing design, about half the size of the B-2.
Have a good weekend and enjoy some quiet time. For most of us aviation is our life but remember – there is life after aviation so keep friends and family close.
Robert Novell
June 28, 2013