Transcontinental and Western Air, Inc. – Aviation Ads Open a Window to the Past – March 25, 2022 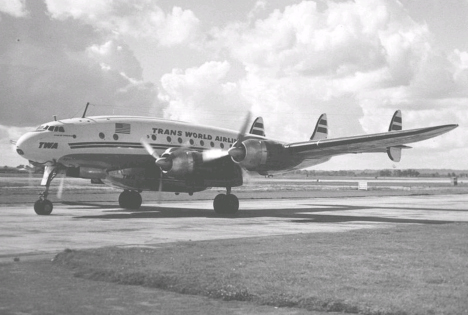 The Connie, a nickname for the Constellation, was designed in 1939 to meet TWA’s specifications for a long-range commercial transport. However, we all know now that this was a Howard Hughes airplane designed to meet his needs and specifications. The development of the Connie was done in complete secrecy, which was demanded by Mr. Hughes, with Kelly Johnson being the lead aerodynamicist for Lockheed. An interesting footnote for Kelly Johnson is that he later ran the “Skunk Works” for Lockheed where they developed the U-2 and the SR-71.

The design called for an airplane capable of carrying 20 passengers in sleeping berths, or 44 in a normal seating configuration, 6000 pounds of cargo, and cruise at speeds of 250-300 MPH at twenty thousand feet. The new design was designated Model-049 and flew its first flight in January of 1943, but because of the ongoing war TWA, nor Pan AM, received the aircraft they had ordered because they were pressed into military service and not released back to Lockheed until 1946.

In April of 1944 Jack Frye and Howard Hughes flew the prototype Connie from Burbank to Washington, DC for a select group of Generals to inspect. The flight made the trip in record time, six hours and fifty eight minutes, and as it taxied past the waiting newsreel cameras the Generals turned red with rage. Mr. Hughes had decided to paint the airplane in the red and white colors of TWA and not in the olive drab color of the Army Air Forces. The obvious problem with this was that Mr. Hughes did not own the airplane.

The Connie proved to be a winner for TWA and allowed them to take the lead nationally and internationally for some time, but things would change with the introduction of the Boeing 707 and the Convair series. TWA would continue to fly the Connie well into the jet age and this gave Pan Am, United, American, and others. This was an advantage that TWA would never recover from.

Next week we continue the series on TWA. We will be talking about Carl Icahn, and how he finished the job that Howard Hughes started and broke the back of “The Flyers Airline.” Until then take care and fly safe.