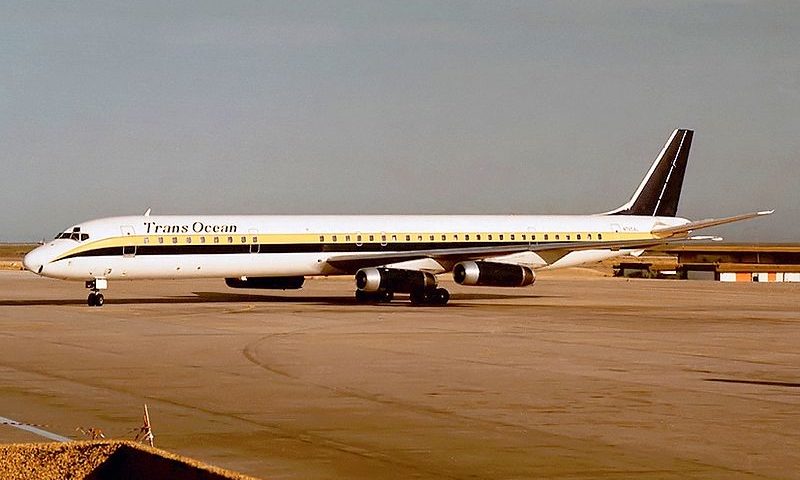 Good Morning and Happy Friday—Today we will finish up out look-back at Transocean Airlines. A great story that very few people are aware of but because you read RN3DB you are now an expert on a very important part of aviation history.

Around the World with Transocean Air Lines

By 1950, Transocean was prominent in the Orient, and Nelson finally had his chance to set up the first operation of a scheduled Japanese airline during October of 1951. TAL’s operation was established under an agreement with Northwest Airlines, which had been awarded the original contract by the Japanese. But at the time, Northwest was unable to furnish the equipment and crews, and Transocean had both. Therefore, TAL was given a subcontract and started the service with four Martin 202s and in February of 1952, flew out two more Northwest airplanes to supplement the operation. The flights linked the main island of Honshu with the industrial centers on the other islands and the Martins carried about 80 percent load capacity. On October 23, 1952, the corporation entered into a contract with Japan Air Lines whereby TAL would furnish all flight crew personnel and dispatchers, plus seven instructors, under the direction of Gene Cohan, Director of Far East Operations for Transocean, to train crews for the JAL domestic routes. Among the station managers at JAL were Dick Laskelle and Larry Bovat, with Dispatcher Vic Lakin. The contract also called for a maintenance facility, Japan Air Lines Maintenance Company (JAMCO) to be established, with mechanics and instructors to be supplied by Transocean. Within the year, TAL also furnished flight crews for JAL’s international operation, with a minimum of twenty-four additional TAL flight crew members assigned to the operation.

The largest, most daring, ferry operation ever undertaken by a civilian airline was accomplished by Transocean flight crews and maintenance men during the spring of 1948. It began when the Chinese Nationalist Air Force purchased 150 Curtis C-46 twin-engine aircraft from the U.S. government and asked Transocean to bid on the “de-mothballing” of the stored surplus aircraft, the overhauling of the planes and the engines, and their delivery to Shanghai, China. They were to be used by General Chiang Kai-shek’s air force. Transocean lost the contract for the overhauling of the engines but presented such a daring and ingenious plan for the transfer of the airplanes to Shanghai that Nelson and his associates won the ferrying contract.

Transocean’s idea for solving the transportation problem was to fit the C-46 Commandos with auxiliary long-range fuel tanks and fly them across the Pacific to China. All the other bidders had insisted on dismantling the overhauled aircraft and shipping them across the Pacific by steamship. Heavy odds were placed against the success of TAL’s projected sky ferry operation. Experts estimated a loss of at least 7 aircraft, so Transocean acquired 157 to fill the contract. But this was exactly the sort of challenge that Nelson and his staff enjoyed.

The special cabin tanks to extend the range from 1,500 to 2,600 miles were installed in each C-46 at Transocean’s Oakland maintenance base. Then test flights were made to determine the fuel consumption of the modified transports. Detailed arrangements were then made to station mechanics at the Pacific island bases on the route. At these intermediate points would be spare parts, engines, and fuel. The flight plan called for a zigzag route originating in Los Angeles, then to Oakland, and on to Honolulu, Wake (or Midway), Guam, Okinawa, and finally to Shanghai. The C-46s were dispatched in groups of 5, and a Transocean DC-4 was later flown to China to bring the crews back to Oakland.

On April 20, 1948, Captain Frank Kennedy, flew the first C-46 (C46320) into Shanghai, but not without incident. The long-range fuel tanks (formerly cabin tanks in DC4s picked up from military surplus) installed in the C-46 cabins, consisted of a metal shell with a neoprene rubber bladder inside. The metal container was not leak-proof, the bladder was supposed to be – or rather, would have been – had it been allowed to maintain its form (more on that later!). These auxiliary fuel tanks were connected to the aircraft fuel system with turn-on valves – some of them common water faucets. A vent from the bladder to the exterior of the aircraft was installed in order to allow air to flow into the bladder as fuel was used by the aircraft. This was to maintain the shape of the neoprene and prevent collapse. The vent was cut off at a 45 degree angle as many exterior vents are.

Captain Kennedy reported, “After a 12½ hour flight from the mainland to Honolulu Airport, gasoline was found to be running out the rear door of the aircraft. The combination of fuel consumption and the 45 degree angle on the bladder vent put negative pressure on the bladder, allowing it to collapse within the metal shell. This caused cracks within the wall of the neoprene to leak fuel into the shell and then flow into the aircraft. I realized what was happening and rotated the exterior vent in order to obtain a slight positive pressure, thereby keeping the bladder inflated within the metal shell.”

“We informed maintenance of our fuel experiences and how we fixed it. No other aircraft then experienced this fuel problem and Transocean safely ferried 157 C-46s to Shanghai.” According to Captain Kennedy’s log book, he flew 9 more C-46s to Shanghai, ending with his last trip on September 6, 1948. Transocean logged over a million and a half miles over the Pacific Ocean en route to China. There was only one later incident. The 148th Commando lost an engine 400 miles offshore from Oakland but returned on its remaining engine for repairs before completing the trip.

Transocean’s pilots were modern day swashbucklers. Young and daring, most were in their 20s, yet they were tough and capable, with professionalism unequaled by their contemporaries of the scheduled airlines. Most had been seasoned by war. They took on any challenge, blazed new air routes, sometimes landing where no other large aircraft had been, and set speed records as a matter of course.

I hope you have a good weekend and remember to keep family and friends close. Life is unpredictable and as I have said before: “Job security as a professional pilot is a myth even in the best of times.”