Good Morning—First Monday of the month and let’s talk about strange airplanes. One of the most strange and bizarre looking aircrafts that ever took to the air has to be the Zveno. One of a composite bomber/fighter design by Vakhmistrov. The concept first took shape in the mid twenties when the Soviet Air Force was looking at ways to both, shoot down incoming enemy bombers and to supplement the ground troops in the battlefield. 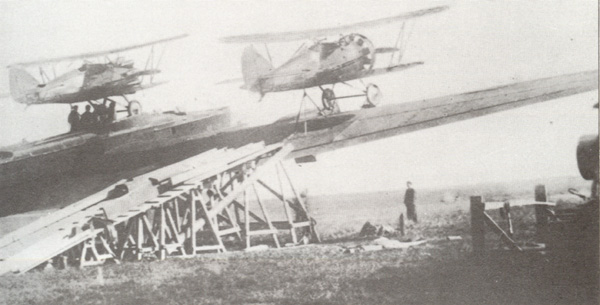 Many new concepts and designs came forward, but the most intriguing to the Tupolev Bureau of Aircraft Design, was the Zveno. The concept was fairly easy. Utilizing the largest bomber of its day, the massive TB-3, different combination of fighters and dive-bombers were attached to its fuselage and/or wings to provide the bomber with its own defensive capabilities.

After experiments conducted with gliders attached to so called “mother ship”, the Polikarpov R-1, designer Vladimir Vakhmistrov proposed a radical new concept that eventually developed into one of the world first “parasite” configurations. In the late twenties, Vakhmistrov persuaded the then infant Soviet Air Force, that a heavy bomber could carry fighters for its own protection and release them when necessary, and also produce a ground attack aircraft capability. The first of these combinations, named the Zveno 1 or Z-1, involved carrying a modified I-4 fighter above each wing. The airplane was placed in position using wooden ramps and ropes to haul them onto the wing. The initial trials proved successful and, after the design had been adapted to carry the larger I-5 fighters, the bomber designation changed to Z-1a. Continuing trail led to the bigger TB-3 “mother ship”. The Z-2 consisted of a TB-3 with three I-5s, one on each wing, and a third above the fuselage. The TB-3 proved to be an excellent carrier platform. The next model, the even more ambitious Z-5 featured a Grigorovich I-Z suspended beneath the TB-3 on a steel trapeze. The airplane could then be recovered after their release using a system similar to that used by the Curtiss F9C.

The TB-3 had four 819 HP Mikulin AM-34-RN piston engines as power plants. It generated a maximum speed of 152 mph, a major feat for this kind of orthodox aircraft. The engines gave the TB-3 a climb rate of 8 min to 3,280 ft. The range of the aircraft was some 620 miles and had a service ceiling of 25,393 ft. Its maximum take-off weight was 41,529 lbs. With a wing span of 137 ft 1 in, a length of frame of 82 ft 4 in and a wing area of 2,523 sq ft. The TB-3 main armament, apart from its fighters “parasites” was two 7.62 mm machine guns, one mounted on the nose and the other in the tail position. Plus two more machine guns of the same caliber in the dorsal and ventral positions. The original Zveno Z-1 first took to the air with Vakhmistrov on December 3rd, 1931 at Monino. The first successful in-flight release of all five units’ planes occurred on November 1935.

The pilot of the TB-3 bomber had the difficult task of keeping the “mother ship” as steady as possible during the extremely difficult release sequence. The airplanes on the wing were released simultaneously to prevent the dangerous asymmetrical situation of having an aircraft on one wing but not in the other. The aircraft was extremely un-manoeuvrable when all the aircrafts were attached to it. The co-pilot was assigned the task of releasing the main axle attachment on the I-5 fighter, once the pilot had released the rear fixture. The fighter above each wing of the Zveno was the Polikarpov I-5 model, secured by a hold-down undercarriage and a steel tripod fixture attached to the Zveno’s wing. An I-16 fighter plane was attached beneath each wing. Each one was held in position by two large V-struts made from aluminum tubing. Suspended beneath the bomber fuselage, on a steel tube trapeze, was the I-Z fighter, the only aircraft that could be recovered after it had launched the “mother ship”. The I-Z had a steel structure with a sprung hook in the front of the pilot’s cockpit, which the pilot guided into the trapeze.

The culmination of the design process was the still incredible Aviamatka, which carried two planes I-5, two I-16s and an I-Z on the trapeze. Unexpectedly, the final combination, the Z-7, saw service during the early years of the Great Patriotic War (WW II), carrying two I-16SPB dive-bombers and it made one famous mission, bombing and destroying a bridge at the Danube in Chyernovod, Romania. After the TB-3, some major aircraft development companies had tried out with composite aircraft designs. Some of the most commonly known are the Curtiss F9C Sparrow Hawk that were attached to the airships USS Macon and Akron and were able to be recovering by the “mother ship” utilizing a trapeze system.

Another type was the late 1945 Luftwaffe experiment of using a Ju 88 as a flying bomb guided by an attached single fighter; the experiments were never carried out in major phases. The last attempt to use a composite system was the use of the US Air Force Convair B-36 Peace-Maker bomber as a “mother ship” with a GRF-84F reconnaissance aircraft under the fuselage, again, as in the other programs, they never make it to the operational phase status.

Have a good week and remember that there is life after aviation so enjoy the time you are here on planet earth – it is a short ride.