Good Morning—Another week of our lives has past and it’s time to talk about airplanes. The Curtiss C-46 Commando is an airplane that was overshadowed by the the DC-3 and has been largely forgotten; however, I have not forgotten and this week I want to reintroduce you to an airplane that made a lot of history and is still making money for commercial operators around the world.

The loss rate of the C-46 was high and it had a mixed reputation with aircrews. Partly the problem was the fact that environment was very harsh, operating conditions were difficult, and Japanese fighters were an occasional threat. However, stories still circulate that the C-46 also suffered from a large number of engineering and manufacturing faults, in particular a leaky hydraulic system. Crews were said to take a barrel of hydraulic fluid along on flights to make sure that the hydraulic systems were topped off before they were used. There was also apparently a fuel leak problem that took a long time to work out, with aircraft being lost in midair explosions at a steady rate until it was.

It doesn’t appear that the C-46 was an inherently bad aircraft, it was just rushed into service without the level of qualification that it would have been run through in peacetime, and it took a lot of work to get the bugs fixed. The aircraft’s detractors called it the “Curtiss Calamity” and the “Leaky Tiki”, though it was also more affectionately named “Dumbo”, after the flying baby elephant in Walt Disney’s 1941 animated movie.

Chennault, a retired USAAC Colonel who had become special advisor to the Chinese Air Force in 1937, formed the American Volunteer Group (AVG) with 100 US-financed P-40Bs and began operations against the Japanese from bases at Kunming, the first successes recorded on 20 December 1941. In fact, this was the only air defense China had to offer at that time. The AVG ceased to exist on 30 June, 1942. The aircraft were taken over by the 23rd Fighter Group, developing into the China Air Task Force (under Chennault, recalled to active service as a General). Because the Japanese controlled the Chinese coast and the fall of Burma closed off the last remaining supply routes over the ground, all supplies (including aviation fuel!) had to be airlifted in. Existing numbers of aircraft had to be increased to be at all effective.

The direct distance between the Assam bases and Kunming was only some 500 miles, but the route is the most rugged imaginable. Chabua, on the banks of the Bhramaputra River, is only 90 ft above sea level but the Valley Walls climb to 10.000 ft. in the Patkai range. A series of ridges rise to a height of 14.000 ft and over, while Kunming itself sits at 6.200 ft. elevation. The icing level is at about 12.000 ft. and the flying was mostly done on instruments in foul weather: constant cloud cover, frequent violent thunderstorms, and tricky wind currents over the mountains…. Men and machines were put through extremes here, pushing the limits!
The service ceiling of the C-46 stood at 16.000 ft., above which it is not completely stable. The Hump was flown at 20.000 or 22.000 ft. eastbound and 21.000 ft. westbound…! As the C-46 cannot climb at 500 ft. per minute, it was necessary to climb near the base to gain sufficient altitude for the crossing.

The total number of aircraft assigned to the Hump continued to rise to a maximum of 332 in July 1945, during which 71.042 tons were carried. At present day this would take 536 sorties by C-5 Galaxies…! Personnel involved peaked at 22.359.
By 1945 the tide of war changed and other routes became available; thus the C-54 could now could be put to use (it lacked the ceiling of the C-46, but on the routes now available it could carry 1.7 times the payload of the C-46).

Another interesting article that I found on “Flying the Hump” was located on CNACs web page and is a reprint of an article from The Wall Street Journal on Saturday, February 25, 2012. You may have difficulty reading this but if you click on the image itself it will take you to the actual web location. 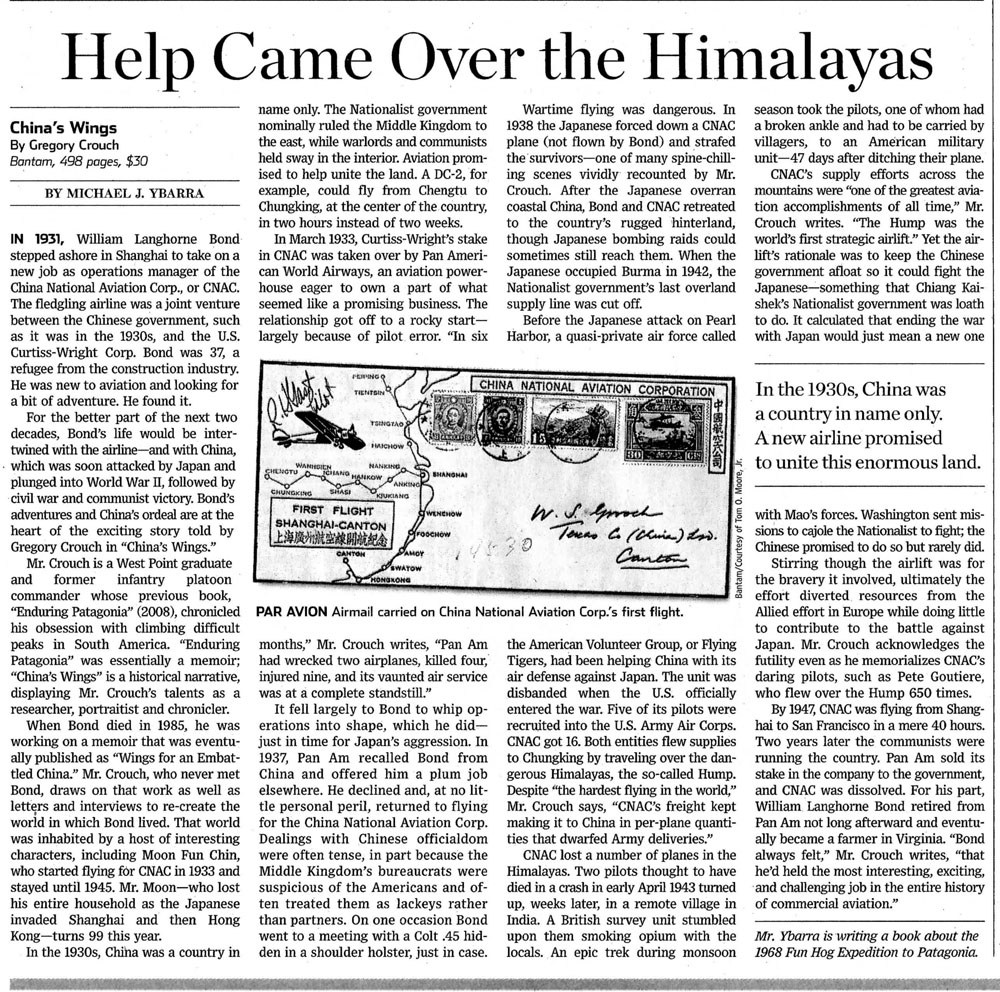 The web sites that I used are listed below, and if time permits, do some research on your own and let’s see if we can bring history’s forgotten airplane back in to the mainstream.

Have a good weekend and I hope to see you back here next Friday when we will be talking about……………. Take care, fly safe, and be safe.