Good Morning—I hope everyone had a good week and is ready for the weekend. For those who have to fly – fly safe. This week I am going to start a series on American Airlines to remind you of their roots and the role they played in building the air transportation system. I will have some very interesting ads to go with these articles, that reflect the time period in each article, and a little bit of history that you may not be aware of.

Barnstorming was at the forefront of the aviation industry during the 1920s. Most aviators flew the Curtiss JN-4s, also known as the Jenny, which they could buy for just $200 from the US Government as surplus. This plane was used to train pilots during World War I and most aviators were comfortable flying these planes and wanted to continue flying to make their living.

During barnstorming shows, a team of pilots, or a single pilot, would fly over a small rural town to get the attention of the town locals. These planes would typically take off from a farmer’s field and the pilot would make arrangement with local farmers to use their field. Barnstormers were famous for performing all sorts of stunts including loops, barrels, spins and stunt parachuting. The best known of the “Flying Circuses” was “The Ivan Gates Flying Circus” and an African American group called “The Five Blackbirds”.

Barnstorming continued to draw crowds and thrived until around 1927 when the U.S. Government enforced safety regulations that barred many barnstormers from performing public stunts. After several aircraft accidents, the Government outlawed many aerial stunts at low latitude and by the free spirited aviators were forced to change their focus.

Still, many skilled aviators were available to fly other planes and some trained to fly with The Aviation Corporation. This company was formed in 1929 to acquire young aviation companies, and its subsidiaries were incorporated into American Airways. The company grew rapidly to cater to domestic passengers, and by 1926, it became the first airline to fly the Douglas DC-3 in commercial service. By the end of the 1920s, American Airlines became the country’s number one domestic air carrier. On February 16, 1937, the airline made history by carrying its one-millionth passenger.

The airline grew rapidly at a time when the United States mail transport system and air transportation industry was expanding and growing at a record pace. When it became clear that passenger planes could be a viable source of revenue for the transportation industry, the Federal government passed The Air Commerce Act in 1926 to regulate air traffic rules and accommodate for the boom in commercial flights.

It wasn’t until 1927 that Charles A. Lindbergh made aviation history by flying his tiny “The Spirit of St. Louis” plane from Long Island to Paris. This became the first non-stop solo transatlantic flight and it was then that Lindbergh became campaigning for a World Air Code to set some regulations in air travel around the globe.

Some of the major government rules and regulations that impacted the airline industry took place in 1934 when President Franklin D. Roosevelt canceled all air mail contracts and forced aviation holding companies such as AVCO to break up. It was at this time that American Airways was renamed American Airlines and official service began in May 1934.

Last week we discussed some of the key events over the course of American Airlines’ history. This week I want to take a close look at some of the key events in the early years of American’s existence. From 1939 to 1945, the aviation industry underwent rapid expansion domestically and internationally. American Airlines played a very important role during this period and during World War II the airline was responsible for serving the military and U.S. government by providing supply flights to various destinations in Alaska, Morocco, Australia, Iceland and India. Half of American Airlines’ fleet was turned over to the Air Transport Command division during World War II. These planes were flown all over the world and the remaining fleet carried passengers traveling around the United States.

During this time, the Civil Aeronautics Board (CAB) issued new contracts for some of American’s major routes and American was then faced with competition from TWA and United.

American Airlines began trading on the New York Stock Exchange on June 10, 1939 and three years later, entered the airline catering business with Sky Chefs. It wasn’t until 1944 that the airline would schedule its first domestic U.S. freight service and this business expanded rapidly with the addition of the Douglas DC-4, DC-6A and DC-7 freight planes to the fleet.

After the end of World War II, competition for coast-to-coast flights between the major airlines was fierce and American, TWA and United Airlines fought hard for exclusive rights to fly along the major coast-to-coast routes. American Airlines was already flying the Douglas DC-4 across the country for 13 to 14-hour trips, and later flew the New York to Chicago route which took about 11 hours.

American Airlines continued to compete with fervor, introducing new and improved aircraft from Lockheed and Douglas.

It’s important to note how World War II helped to revive the aviation industry. Many airlines in Allied countries were free of any lease contracts to the military so they were able to carry cargo and passengers to serve as civil air transport planes. Aircraft built during this period, including the Douglas DC-6 and the Lockheed Constellation, which were designed on planes like the B-29 and others. These were very efficient, high-speed planes and offered many benefits to passengers and freight companies.

From 1930 to 1945, the aviation industry became the largest single industry in the world, and became first among all industries in the United States. Less than 6,000 planes were produced per year before 1939. By 1940, production had doubled and again in 1941 and 1942. In May 1940, President Roosevelt ordered that the U.S. aircraft industry should produce 50,000 planes per year, which equated to about 4,000 planes per month.

This week we continue our series on American and focus on post World War II. After World War II, many American Airlines aircraft were put into commercial service and by 1949, the airline had become the only airline in the United States with a fleet of pressurized passenger planes. However, the jet age was on the way and US airlines were about to experience an explosion in technology.

1944 marked the beginning of what is called the “Jet Age”, a time when American aviators were flying bigger, more efficient piston-powered planes. Many aircraft manufacturers were simply not interested in building passenger jets because fuel for these planes was very expensive. The traveling public was also just fine flying in propeller airplanes, but the head of Pan Am found a way to introduce big jets into the commercial space and actually make a big profit. Juan Trippe of Pan Am found a way to create a thriving jet building business, with the help of Boeing and Douglas. The Boeing 707 was launched, and he managed to fill his fleet at 90% capacity.

The airline industry grew once again, and many airlines started focusing on the customer service end of the business. Stewardesses took on a glamorous role during the 40’s and 50s, and many airlines – including American – advertised in-flight benefits such as meal service and comfortable seats.

From 1945 to 1950, American began operating American Overseas Airlines (AOA), a trans-Atlantic division that would serve several European countries. This was a merger between the international division of American and American Export Airlines. AOA would later merge with Pan American World Airways.

By 1959, American Airlines became the first domestic airline to offer domestic jet service and purchased, rather than leased its planes.

During the 1960s and 70s, American introduced and implemented SABRE (Semi-Automated Business Research Environment) and later extended the network from Canada to Mexico. This became the second largest real-time data processing system, with the U.S. government’s SAGE system being the first.

During the Jet Age, American added several high-powered jets to its fleet, including the Boeing 727 and the Boeing 747.

The Deregulation Act of 1978 removed many of the controls the U.S. government had through the regulations set forth by the Civil Aeronautics Board (CAB). The free competition this act created helped speed up the growth and expansion of American Airlines and some of the other major passenger-carrying airlines of the time. President Jimmy Carter pushed for the deregulation and prompted major carriers, including American, to offer lower fares and more competitive pricing. This is one of the reasons why American Airlines began offering its “Super Saver” tickets.

Even though the major airlines feared the increased competition and labor unions were concerned about their nonunion employees, there was enough public support for the act to pass.

Many major airlines fell apart after the passage of the Deregulation Act of 1978. American Airlines was not one of them, and continued to maintain its position as one of the strongest commercial airlines in the aviation industry. It managed to acquire all of Eastern Airline’s major routes into Latin America, and by the 1990s, became one of the strongest players in the East Coast Market.

That’s it for this week. Next week we will continue with our look back at American but until then, enjoy the ads below, have a safe weekend, and remember the standards to be maintained by a “Gatekeeper.” 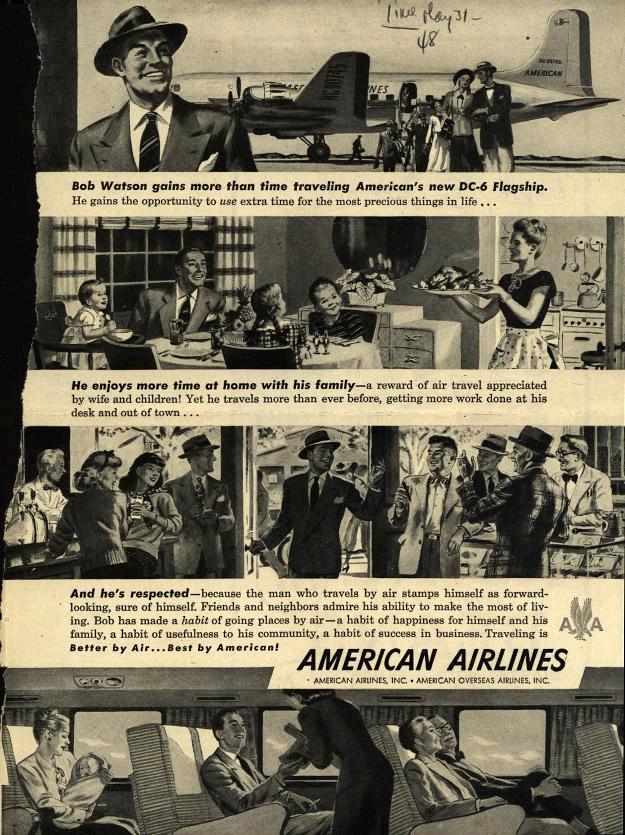 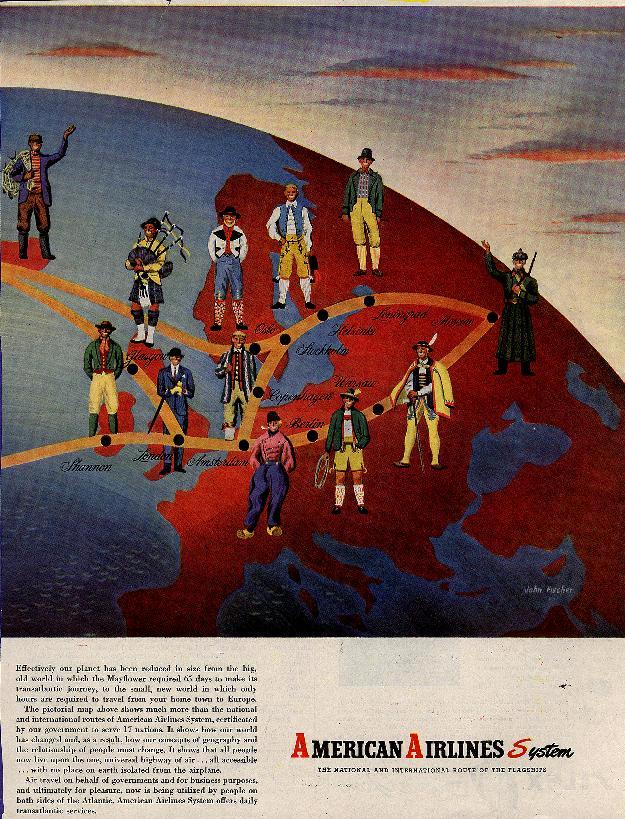 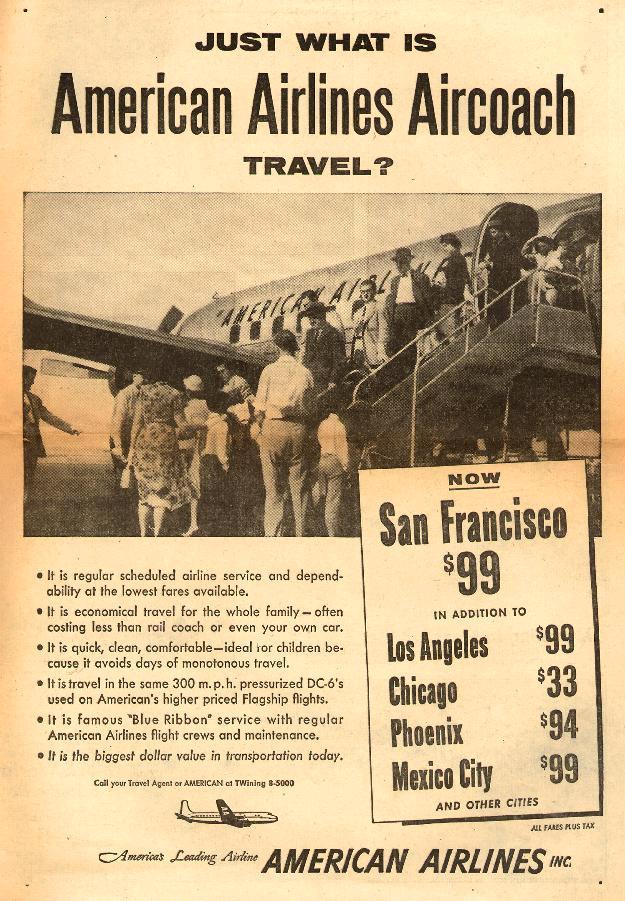 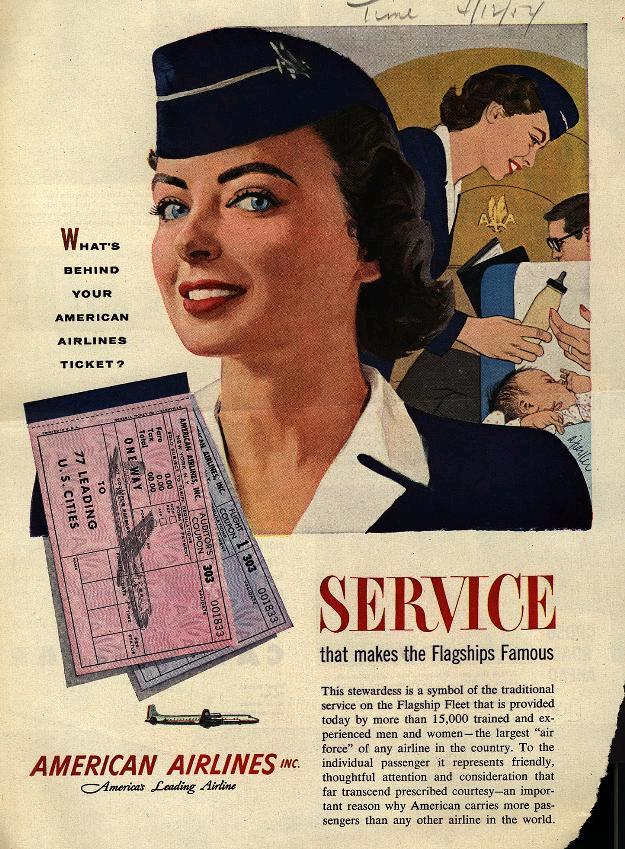 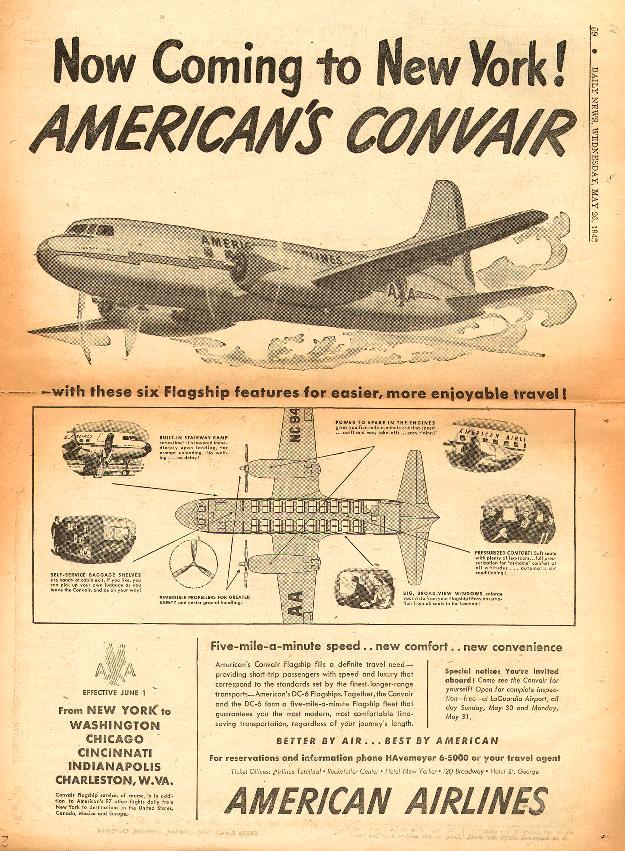 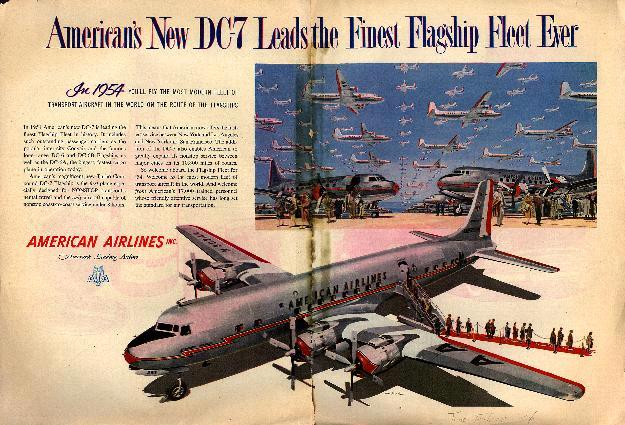 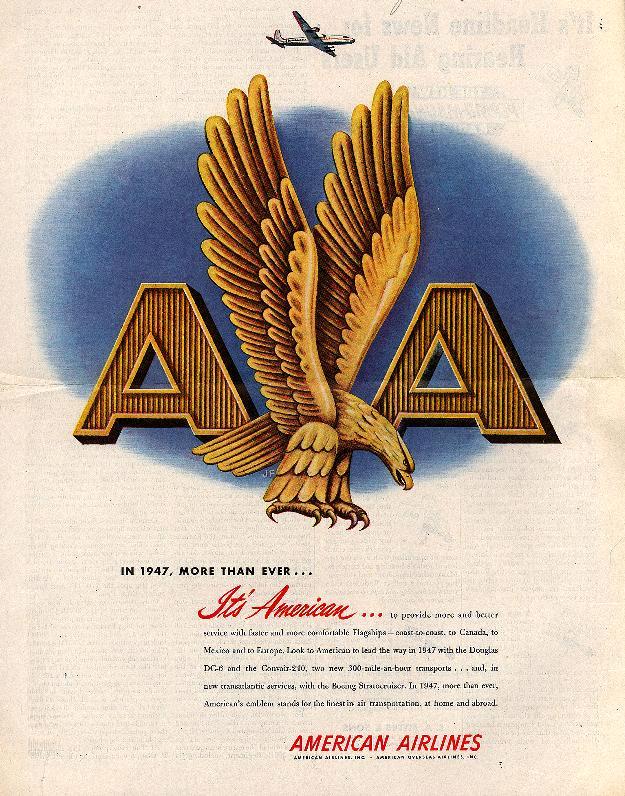 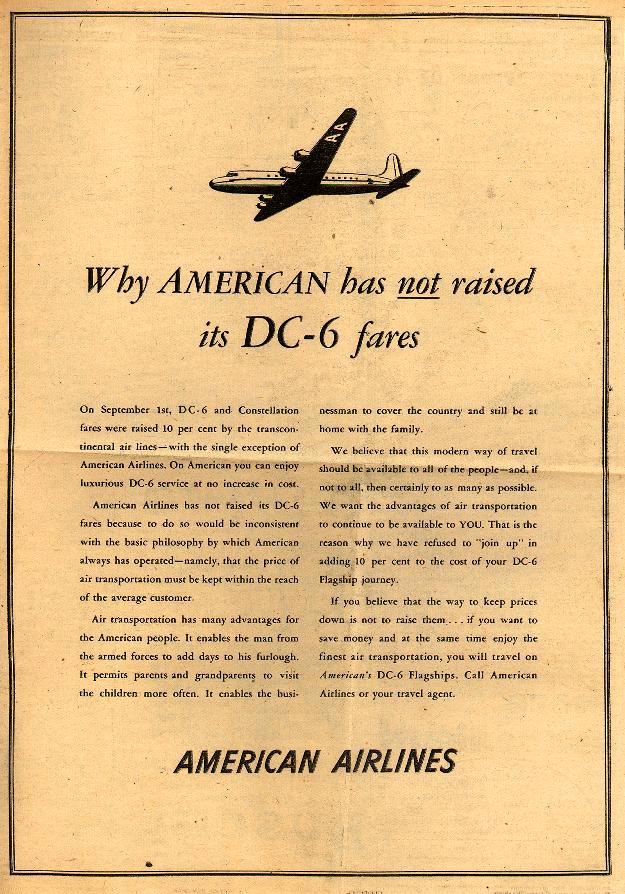 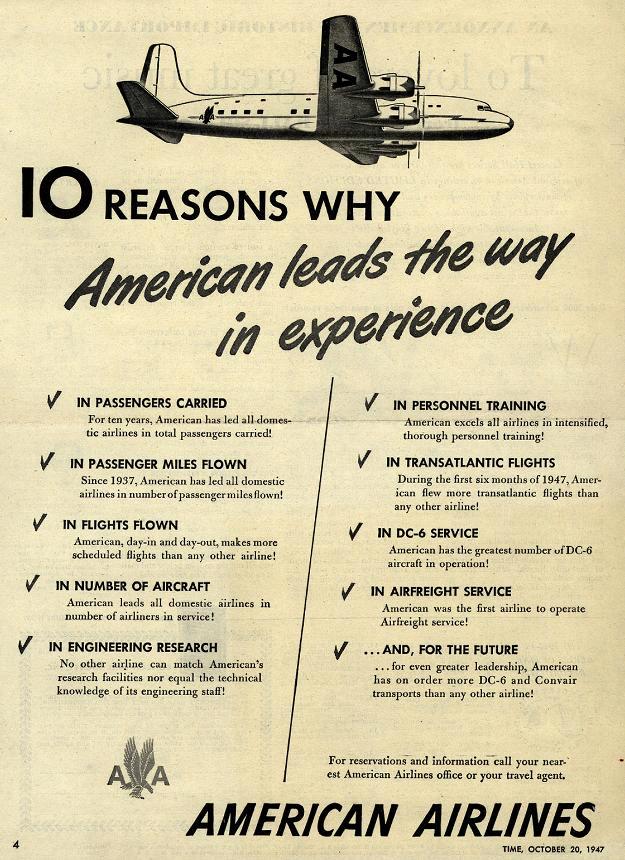 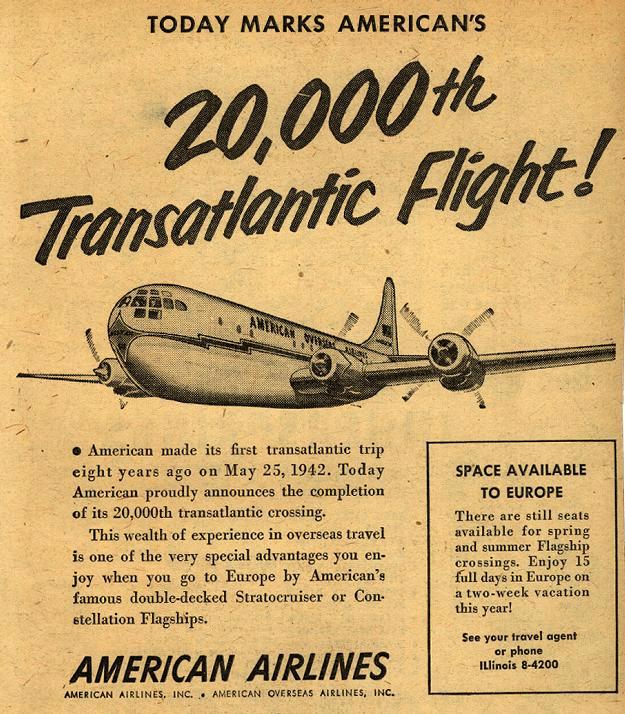 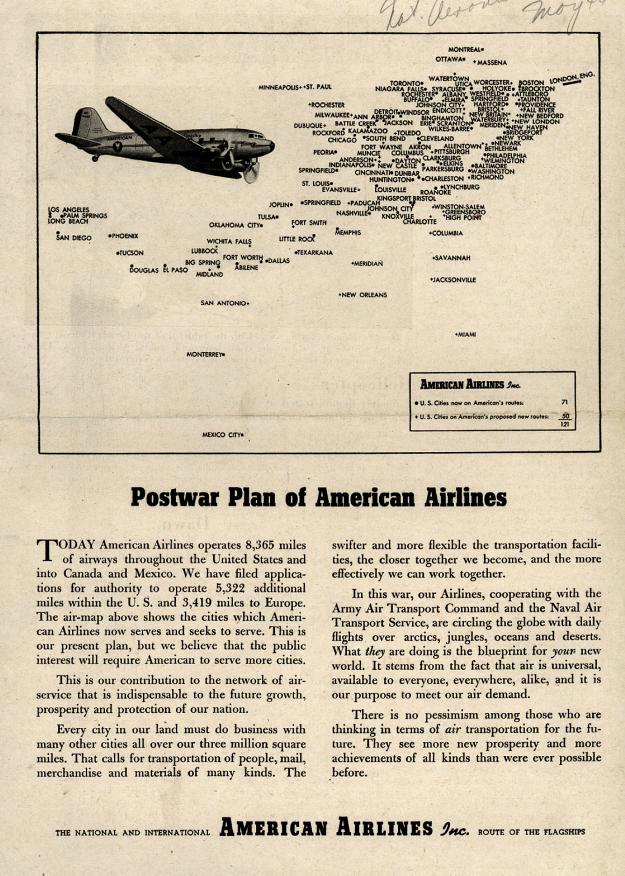 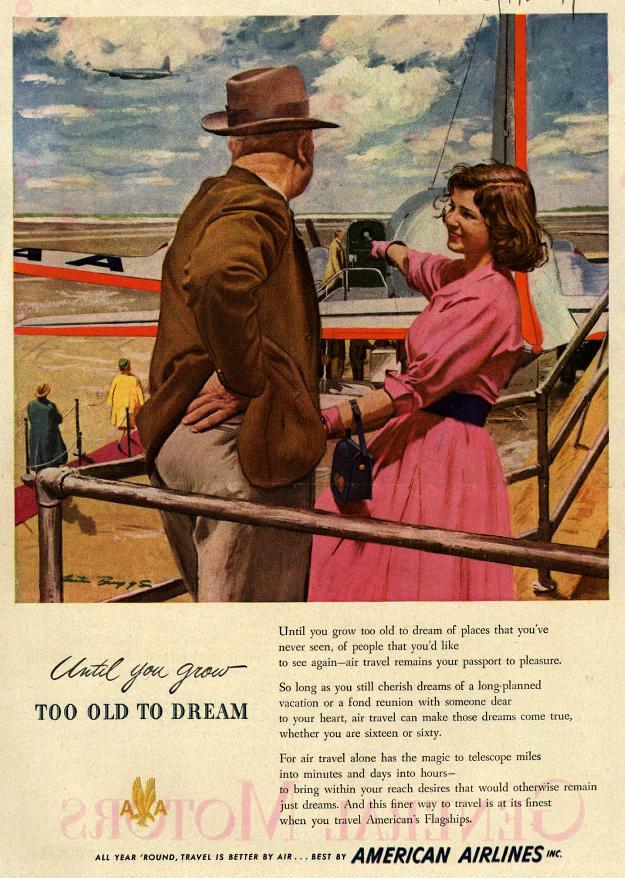