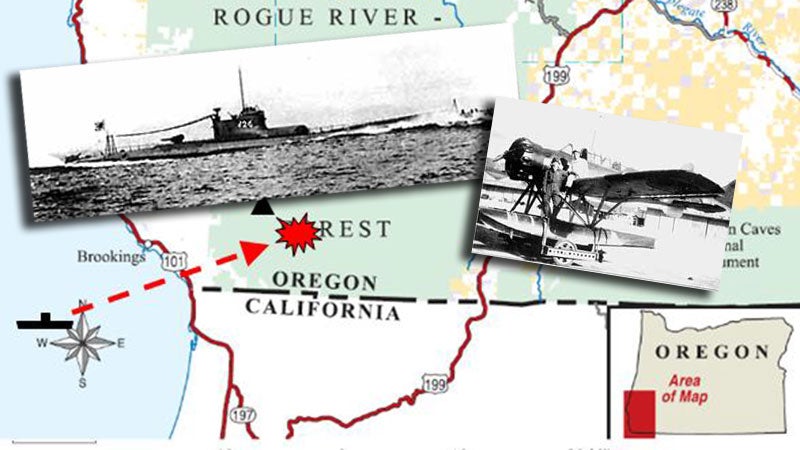 This week I want to share an article I stumbled on to while doing some research. I was familiar with this event in history, but the facts were a bit obscure, so I thought it might be worthwhile to share this with everyone. The website where I found this has a lot of interesting articles, and tidbits, so click on the “Source Document” at the end of my post, and take a look.

Thanks to Jack Lehman, Navy Diver (Ret.), for bringing this to my attention. Authored by Norm Goyer, it was found on Aircraft Market Place Blog.

September 9, 1942, the I-25 B1 type Japanese submarine was cruising in an easterly direction raising its periscope occasionally as it neared the United States Coastline. The B1 type was the most numerous class of Japanese submarines.  They were fast, long-ranged, and carried a seaplane behind watertight doors, which could be launched on a forward catapult.

Japan had attacked Pearl Harbor less than a year ago and the Captain of the attack submarine knew that Americans were watching their coast line for ships and aircraft that might attack our country. Dawn was approaching; the first rays of the sun were flickering off the periscopes lens. Their mission; attack the west coast with incendiary bombs in hopes of starting a devastating forest fire. If this test run were successful, Japan had hopes of using their huge submarine fleet to attack the eastern end of the Panama Canal to slow down shipping from the Atlantic to the Pacific. The Japanese Navy had a large number of I-400 submarines under construction. Each capable of carrying three aircraft. Pilot Chief Warrant Officer Nobuo Fujita and his crewman Petty Officer Shoji Okuda were making last minute checks of their charts making sure they matched those of the submarine’s navigator.

September 9, 1942: Nebraska forestry student Keith V. Johnson was on duty atop a forest fire lookout tower between Gold’s Beach and Brookings Oregon. Keith had memorized the silhouettes of Japanese long distance bombers and those of our own aircraft. He felt confident that he could spot and identify, friend or foe, almost immediately. It was cold on the coast this September morning , and quiet. The residents of the area were still in bed or preparing to head for work. Lumber was a large part of the industry in Brookings, just a few miles north of the California Oregon state lines.

Aboard the submarine the Captain’s voice boomed over the PA system, “Prepare to surface, aircrew report to your stations, wait for the open hatch signal” During training runs several subs were lost when hangar door were opened too soon and sea water rushed into the hangars and sank the boat with all hands lost. You could hear the change of sound as the bow of the I-25 broke from the depths, nosed over for its run on the surface. A loud bell signaled the “All Clear.” The crew assigned to the single engine Yokosuki E14Ys float equipped observation and light attack aircraft sprang into action. They rolled the plane out its hangar built next to the conning tower. The wings and tail were unfolded, and several 176 pound incendiary bombs were attached to the hard points under the wings. This was a small two passenger float plane with a nine cylinder 340 hp radial engine. It was full daylight when the Captain ordered the aircraft to be placed on the catapult. Warrant Officer Fujita started the engine, let it warm up, checked the magnetos and oil pressure. There was a slight breeze blowing and the seas were calm. A perfect day to attack the United States of America. When the gauges were in the green the pilot signaled and the catapult launched the aircraft. After a short climb to altitude the pilot turned on a heading for the Oregon coast.

Johnson was sweeping the horizon but could see nothing, he went back to his duties as a forestry agent which was searching for any signs of a forest fire. The morning moved on. Every few minutes he would scan low, medium and high but nothing caught his eye.
The small Japanese float plane had climbed to several thousand feet of altitude for better visibility and to get above the coastal fog. The pilot had calculated land fall in a few minutes and right on schedule he could see the breakers flashing white as they hit the Oregon shores.

Johnson was about to put his binoculars down when something flashed in the sun just above the fog bank. It was unusual because in the past all air traffic had been flying up and down the coast, not aiming into the coast.

The pilot of the aircraft checked his course and alerted his observer to be on the lookout for a fire tower which was on the edge of the wooded area where they were supposed to drop their bombs. These airplanes carried very little fuel and all flights were in and out without any loitering. The plane reached the shore line and the pilot made a course correction 20 degrees to the north. The huge trees were easy to spot and certainly easy to hit with the bombs. The fog was very wispy by this time.

Johnson watched in awe as the small float plane with a red meat ball on the wings flew overhead, the plane was not a bomber and there was no way that it could have flown across the Pacific, Johnson could not understand what was happening. He locked onto the plane and followed it as it headed inland.

The pilot activated the release locks so that when he could pickled the bombs they would release. His instructions were simple, fly at 500 feet, drop the bombs into the trees and circle once to see if they had started any fires and then head back to the submarine.

Johnson could see the two bombs under the wing of the plane and knew that they would be dropped. He grabbed his communications radio and called the Forest Fire Headquarters informing them of what he was watching unfold.

The bombs tumbled from the small seaplane and impacted the forests, the pilot circled once and spotted fire around the impact point. He executed an 180 degree turn and headed back to the submarine. There was no air activity, the skies were clear. The small float plane lined up with the surfaced submarine and landed gently on the ocean, then taxied to the sub. A long boom swung out from the stern. His crewman caught the cable and hooked it into the pickup attached to the roll over cage between the cockpits. The plane was swung onto the deck, The plane’s crew folded the wings and tail, pushed it into its hangar and secured the water tight doors. The I-25 submerged and headed back to Japan.  Destroyer USS Patterson sank I-25 off the New Hebrides on 3 September 1943, almost exactly one year after the Oregon bombing.

This event ,which caused no damage, marked the only time during World War II that an enemy plane had dropped bombs on the United States mainland. What the Japanese did not count on was coastal fog, mist and heavy doses of rain, which made the forests so wet they simply would not catch fire. This Memorial Plaque is located in Brookings, Oregon at the site of the 1942 bombing

Fifty years later the Japanese pilot, who survived the war, would return to Oregon to help dedicate a historical plaque at the exact spot where his two bombs had impacted. The elderly pilot then donated his ceremonial sword as a gesture of peace and closure of the bombing of Oregon in 1942.

Hope you enjoyed this look back and you have a good week. Take care, be safe, and enjoy some quiet time during each day so that you can keep things in perspective. Life is short – too short.