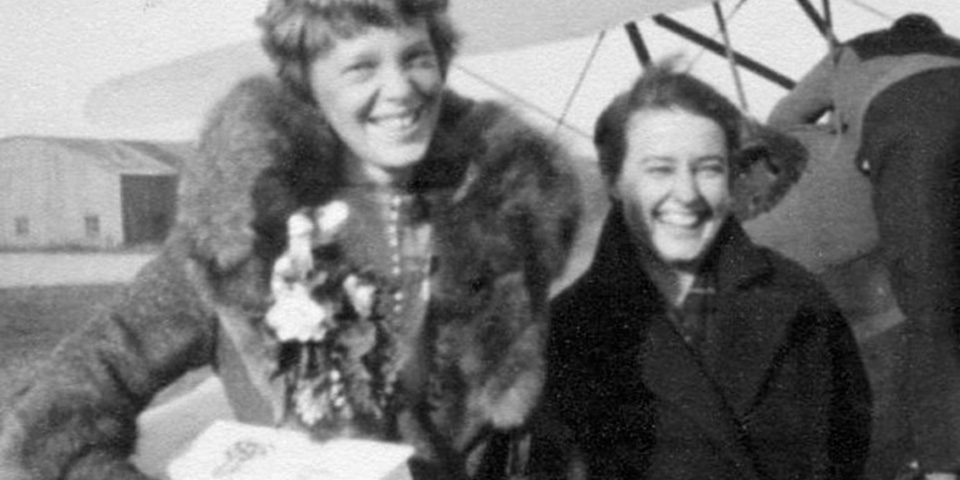 Welcome back to the 3DB, This week I want to introduce you to young lady who made aviation history and brought female aviators to the forefront. Although her career, and achievements, were significant accomplishment for any aviator Ms. Richey took her own life at age 30….sad.

In the steel town of McKeesport, Pennsylvania, readers of the local Daily News stared in shock at the headline on January 8, 1947: “Helen Richey—McKeesport’s Ladybird Dead. Famed Flier Dies in New York Room.” The talented pilot who had established a national reputation by setting women’s aviation records and fought her way into the right seat with Pennsylvania Central Airlines was dead at age 37. The sad news seemed incomprehensible to residents of her hometown and to America’s aviation community as a whole.

Richey had been making headlines ever since she soloed at age 20 at Bettis Field in April 1930, after just six hours of instruction. The daughter of McKeesport School System superintendent J.B. Richey, Helen was the youngest of five children. After just one semester at Carnegie Tech, she abandoned college for the flight line. Her father, by then well aware of his daughter’s burning ambition to fly, financed her first aircraft, an open-cockpit biplane.

Within months she flew to Johnsonburg, Pa., for the dedication of a new airport, and managed to talk her way into doing aerial demonstrations during the ceremonies there—despite having only 30 hours in her logbook. Flying a Curtiss Fledgling, Richey started out with a loop, then at 3,000 feet cut the engine, rolled over into a spin and pulled out at the very last minute, wowing the crowd. At that moment Richey discovered just how intoxicating it could be to perform for an audience.

The Golden Age offered a unique window of opportunity for women pilots, who were featured in movies, newspapers and magazines across America and around the globe. Back in 1912, Harriet Quimby had been the first woman to fly the English Channel. In 1921 Bessie Coleman defied gender and race barriers to become the first female African-American to earn an international pilot’s license. In 1927 Louise Thaden charmed Travel Air owner Walter Beech into giving her flying lessons, then became one of Beechcraft’s pilots. And Amelia Earhart, perhaps the most famous of them all, gained a worldwide reputation thanks to her many adventures in the cockpit. For young Helen Richey, hungry for glory, it seemed this was her moment.

Richey won first place in an aerobatic contest in Baltimore, also claiming trophies in Lynchburg,Va., and Niagara Falls, N.Y. In January 1933, she flew in the All America Air Races in Florida, reportedly stealing the show with her stunt flying. That same month she made news when, lost in heavy fog, she landed on John D. Rockefeller’s private golf course. She later wrote her parents that Rockefeller greeted her warmly and went back to his game while she waited for the fog to lift.

In June 1933, Richey was in New York for a race when she decided to do some aerial sightseeing. Flying low over Manhattan, she noticed she was being followed. After landing at North Beach airport, she saw the other plane taxi in, and moments later its pilot, New York City flying patrolman Otto Kafka, handed her a ticket for flying too low. He charged her with flying only 700 feet above Coney Island, apparently a violation of a city ordinance. Newspapers around the country picked up the story.

Richey’s first record-breaking flight gained her national attention later that year. On December 30, United Press reported from Miami: “Miss Richey, Partner Land After Shattering Record. Flying Pair Bring Plane to Earth at Conclusion of 237 Hours in Air.” Richey and Frances Harrell Marsalis had taken off in their Curtiss Thrush monoplane Outdoor Girl (sponsored by a cosmetics company of that name) on December 20, intending to stay aloft until the new year with the help of aerial refueling. They landed short of their goal, at 10:46 a.m. on December 30, due to heavy weather and fatigue.“The two birdwomen were extremely tired but happy,” according to United Press. Their 237 hours and 43 minutes in the air eclipsed the previous record of 196 hours set the year before by Marsalis with Louise Thaden.

At one point in the flight, when the end of the refueling hose got caught in the slipstream and punctured the plane’s fabric skin, Richey leaned halfway out of the cockpit long enough to sew it up. A second mishap occurred as the refueling plane was lowering a 55-pound basket of food, extra fuel, oil and two bottles of beer. The basket banged into the wing, tearing loose a large flap of fabric. Marsalis reportedly talked of landing at that point, but Richey braced herself on a strut and—using patching material from the first incident— repaired that rip too.

As the grueling flight wore on and the two women took turns at the controls, fatigue had become more and more of a problem. They continued to report via radio that they were both fine, but in reality the ninth day was a strain, exacerbated by periodic thunderstorms. Faced with an ominous forecast and aware they had already shattered the record, the pilots decided to land after making it through yet another heavy squall.

In August 1934, both Marsalis and Richey entered a 50-mile individual race, part of the First National Air Meet for Women at Dayton, Ohio. On the fifth lap, as Marsalis rounded the second pylon, her plane was buffeted in the slipstream of two aircraft in front of her. Fighting for control, she traded altitude for speed by nosing down. One wingtip brushed the ground, and her plane cartwheeled for 100 feet, ending up in a potato field. Marsalis was cut out of the wreckage alive, but the 29-year-old flier died on the way to the hospital. For Richey, her own second-place finish, with an award of $500, was no consolation for the loss of her former partner.

Richey next set her sights on becoming a commercial pilot. Late in 1934 she edged out eight male applicants and made history by landing a position with Pennsylvania Central Airlines. At the time, PCA was in heavy competition with Pittsburgh Airways for passengers and mail contracts, and a woman pilot promised the struggling airline good publicity. Richey regularly gave newspaper and magazine interviews and speeches extolling commercial flying. Describing her new job, she told one interviewer,“I’ve done a lot of flying, but I’ll never forget that first trip because it was my first time as a pilot of a regular airliner with the safety of a lot of passengers and Uncle Sam’s mail in my hands.”

From January to October 1935, she flew right seat in a Ford TriMotor between Washington, D.C., and Detroit, with stops in Pittsburgh and Cleveland. Although she was the first female pilot for a regularly scheduled commercial airline, it could be a frustrating, demeaning experience. The Bureau of Air Commerce, for example, told her employer that Richey was to be grounded during bad weather. Male pilots either ignored her or found ways to make her cockpit time uncomfortable. They even threatened to go on strike, and voted to deny her membership in the Air Line Pilots Association. A public protest headed by Earhart denouncing such treatment was ignored. The Bureau of Commerce sided with the pilots’ union, urging PCA to limit her flying to three times a month. Richey’s logbook shows just seven flights in January, one in February, two in April and one in June. Her airline pilot career was quickly becoming a sham.

Facing determined resistance in her chosen career, Richey resigned from PCA after less than a year. The episode apparently remained a sore point, since she became testy whenever reporters continued to question her about why she resigned. But the flame that fueled her ambition had just been temporarily dampened, not extinguished, and she was soon back in the cockpit.

In 1936 Richey focused on sport and competitive aviation. That February, flying a borrowed Aeronca C-3, she set an international women’s speed record for lightplanes, covering 100 kilometers in 51 minutes—averaging about 73 mph. In May sportsman Ben King, who had just set a lightplane altitude record, lent his aircraft to Richey, who took off from Washington’s Congressional Airport with oxygen aboard, reached 18,448 feet and landed at New Market, Va. She had set an international altitude record for an airplane weighing less than 200 kilos (440 pounds).

The McKeesport Daily News had been regularly running stories on the hometown heroine, but now magazines such as Time, Collier’s and McCall’s also began covering Richey’s career. She was invited to a posh Washington party by socialite Alice Roosevelt Longworth, and also attended a dinner for Amelia Earhart at New York City’s Hotel St. Moritz. That August Earhart asked Richey to join her in the cockpit for the 1936 Bendix Air Race, proof of just how far the McKeesport flier had come.

Nine men and six women vied that year for the Bendix Trophy and $15,000 in prize money. Earhart and Richey competed in the twin-engine Lockheed 10E Electra that Amelia would later fly in her fateful attempt to circle the globe. The contestants took off at staggered times from Floyd Bennett Field in Brooklyn, racing against the clock. The rules allowed pilots to follow any route and make any stops they desired along the way. The plane that reached Los Angeles Municipal Airport in the shortest time would be declared the winner.

At 1:37 a.m. on September 5, William Warner, piloting a Vultee V-1A, was the first away. Twenty-four minutes later a Douglas DC-2 launched with Louis Brewer at the controls and the aircraft’s owner, a navigator and mechanic also on board. Earhart and Richey took off at 2:47 a.m. under a full moon. Louise Thaden and copilot Blanche Noyes flew Thaden’s Beech C-17 Staggerwing. Ben Howard in Mr. Mulligan, a plane of his own design, had just disappeared into the Long Island haze when Laura Ingalls—the last competitor to take off—also headed west in her Lockheed Orion 9D Special.

The contestants faced heavy weather, with rain and dense clouds from Kansas City to Albuquerque, but clear skies were forecast from there to the West Coast. Joe Jacobson of Kansas City, Mo., got as far as Stafford, Kan., when his Northrop Gamma 2A suddenly erupted in flames. Luckily Jacobson managed to bail out, landing unhurt.

Have a good weekend/Memorial Day and stop back by next week when we will again look back at some of the forgotten history in aviation.