Good Morning and Happy Friday— Time to talk about the Mach 3 bomber that never made it to production but the design, aerodynamics, and lessons learned showed others the way. 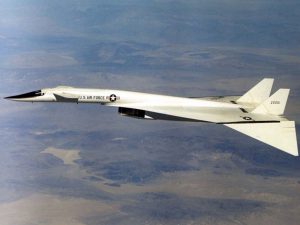 In 1954 General Curtis LeMay, commander of the Strategic Air Command, began to look for a new strategic bomber. The B-58 and the B-52 were currently being used but General LeMay considered their capability limited.

Boeing and North American won the phase one contracts with North American winning the final bid for production of two test beds. In 1958 the project came together and the aircraft had a name, the XB-70.

About 70% of the XB-70 was to be of a new stainless steel. The interior structure was mostly corrugated sheets, and the skin was a brazed honeycomb sandwich of very thin steel yet very strong. The parts most subjected to heat were of a material never before used in an aircraft, René 41, and the airfoil leading edges were machined to extreme sharpness.

The six GE engines were housed in an engine box under the wings profiled to generate compression lift and one engine alone made more noise than any air-breathing engine in history. Development of the two prototypes was to cost around $1.5 billion making them the most expensive two aircraft built to that date and worth, according to one estimate, about ten times their weight in gold.

In mid-1959, the XB-70’s future came into question as a result of the enormous expenditure of funds going into missile systems. Manned aircraft were considered, in some quarters, to be near obsolete and to make matters more awkward, the expensive boron fuel program was cancelled.

Then, in December 1959 the XB-70 project itself was cancelled except for completion of a single prototype. The planned first flight was rescheduled from January to December of 1962; however, it was still hoped that by 1966 a SAC wing might use the XB-70s if the pro-missile lobby could be persuaded to change their views.

After a review in 1960, the program was partially restored and allowance was made for up to twelve fully-operational B-70 to be built in addition to the prototype. In March 1961, during the Kennedy administration, it was still believed that missile development made the XB-70 unjustifiable. The program became a research program focused on Mach 3 aerodynamics with an airframe that could potentially be used as a bomber.

Secretary of Defense Robert McNamara promptly cut back the program to three prototypes, which were ordered on 4th October 1961, but the third was cancelled a few weeks later.

The XB-70 is a great airplane, with beautiful lines, and was a giant leap forward in technology. Take a look at the videos on YouTube, enjoy the weekend, and keep your loved ones close. Life is short and tomorrow morning when we wake up our lives are one day shorter.